DEWALT burned their competition this summer when they launched FLEXVOLT at their 2016 media event.  This new line of cordless power tools and accessories is providing us with the first in the industry cordless job site table saw and 12 inch miter saw.  FLEXVOLT gives you the power of your corded power tools without the cord.  DEWALT’s newest addition, the Portable Power Station, aims to give users power anywhere, and the ability to run corded power tools without the need for traditional 120V AC power. The Portable Power Station allows you go cordless, with a corded power tool. The DEWALT Portable Power Station is both a battery charger, and a power supply device that converts the DC battery pack charges into an AC current.

The inverter delivers 1800W of continuous power and 3600W of peak AC power when  four 20V MAX batteries are used. The charging system allows you to charge between one and up to four batteries.  The DCB1800M3T1 will charge and run on both 20V MAX and 60V MAX FLEXVOLT batteries.  The parallel charging system will allow you to charge all four of your batteries at the same time. Multi-port chargers are very convenient when you’re running multiple tools reducing the need to set up or carry four independent chargers.

The Portable Power Station features LED indicator lights that let users know the status of the battery packs.  Solid red is fully charged and slow blinking red is charging.  If you get a solid yellow light with a blinking red, that indicates the temperature of the battery is too hot or too cold.  When using the DCB1800M3T1 for high demand applications, the batteries can get warm , so it is recommended to remove them from the unit and place the batteries in a cool area. The unit does have a built in cooling fan to assist with cooling the unit and batteries.

In power out mode, the unit is only as strong as its weakest link.  Also, DEWALT recommends that a minimum 3.0 Ah battery packs be used in this mode.  The system is sold as a bare unit or with three (3) – 4.0 Ah MAX batteries and one (1) – 60V FLEXVOLT battery. So it’s possible to run the power station with a mixture of both 20V and 60V battery packs, obviously the most powerful situation would be running the unit on four 60V FLEXVOLT packs for maximum power output and run time.

When the unit goes into fault mode, it will beep 10 times, the LED on the top front will flash and the unit will shut off.  If the unit is getting low on battery power it will beep 2 times every 30 seconds to let you know your time is limited.  The Power Station  LED lights will flash in a left to right fashion when one or more batteries are getting low in charge.  When one battery reaches it’s low charge, the unit will shut off, beep ten times and the LED will flash yellow below the battery for 30 seconds.  You can replace that one battery, turn unit back on, and continue working on your project.

The DEWALT Portable Power Station should not be used with any medical or life saving devices.

The first job the DEWALT Portable Power Station was put to work on had no outdoor electrical outlets.  This project required a corded 25lb rotary hammer and a corded impact wrench.  Each tool was plugged into the unit to give power one at a time.  The power station never hesitated and gave us the power we required for approximately 2 hours, the entire length of the job.

The second project consisted of running a corded multi-tool to cut away rotted soffit.  Again, there were no outdoor outlets near the work area. The power station is so easy to operate.  Just install your four DEWALT batteries and press the power button to turn the unit on and provide outgoing power.  I plugged in a 12 gauge 25 foot extension cord, ran the cord out to the multi tool, and started my repair work.  I had plenty of power to run the variable speed multi-tool for approximately 30 minutes and never felt the tool bog down due to lack of power provided from the Portable Power Station. The portable power station offers a multitude of great benefits.  The first one is the ability to charge up to four batteries at once.  This was a huge advantage when we were on a recent deck project, fully cordless and running six DEWALT cordless tools on 20V and 60V FLEXVOLT throughout the day.  We never had down time waiting for the batteries to charge.

Another benefit of the portable power station is that it has a built-in inverter to power your corded power tools.  The power station requires no flammable fuel to run.  This means that you won’t have to store or carry gas or propane from job site to job site.   The DCB1800M3T1 mirrors a 15A residential circuit by providing you the power you need for that corded tool without ever plugging the tool into your client’s home.

I also found that having the DEWALT Portable Power Station on site eliminated the need for extension cords running into the home to provide outside power.  The last thing that a client wants to see going through their window or under the door sweep is an extension cord.  With the DCB1800M3T1 you have completely eliminated that conversation. Draw Back with Sine Wave

While working on several projects we’ve been trying more and more tools on the Portable Power Station.  The DCB1800M3T1 ran our 10” portable table saw, a 12” dual bevel sliding miter saw, a 4 gallon twin stack air compressor and several other power tools by DEWALT, HITACHI, and PORTER CABLE.  All of the tools ran great without issues or hesitation.  Even the compressor ran fine with no signs of a hard start.

The one tool that wasn’t able to run on the Portable Power Station was the FESTOOL HK55 corded carpentry saw.  The Portable Power Station unit had four fully charged batteries and the LED indicator light never came on, showing a fault or power issues.  On a few occasions, I was able to fire the saw up, but it was never able to make a cut. After further research we found the the Sine Wave is modified and FESTOOL power tools require pure Sine Wave.

What is Sine Wave?

The waveform is a representation of how alternating current (AC) varies with time. The most familiar AC waveform is the Sine Wave, which derives its name from the fact that the current or voltage varies with the sine of the elapsed time. I would like to have a USB port inside a compartment large enough to accommodate a mobile phone. With the smart technology this portable power station already has, adding this feature would be an added bonus for a generation two version.

Another feature I would like to see is a waterproof case to shield it from the weather. This unit is design to be used in dry locations and stored indoors.  I would not be pleased to get caught in a downpour while I was using the DEWALT Portable Power Station but Mother Nature can be unpredictable.  I recommend a durable case to protect the unit, also keeping batteries clean and reducing dust from getting inside.

Lastly would be the ability to run the FESTOOL HK55 corded carpentry saw.  This would have saved time and eliminated the use of power cords stretched out all over the site.

At first I was on the fence about this power station, and then I found more uses for it.  When no outdoor power outlets are available, using this power station means no more running extension cords out of a client house to your work area.  Unlike your average generator, the DEWALT Portable Power Station is quiet and lightweight.  It doesn’t require small engine maintenance because it doesn’t run on fuel.  It also has a nice roll cage to protect the unit and the batteries.

Aside from the jobsite setting, this portable power station can assist during power outages.  It can also be useful for camping trips or outdoor functions.

If you are already on DEWALT’S platform then this power station is a must. If you’re not, then maybe this tool will be a great first piece to start with.  Cordless tools are the wave of the future and DEWALT has been conquering the cordless market with the FLEXVOLT line. The DEWALT Portable Power Station allows you go cordless, with a corded power tool. 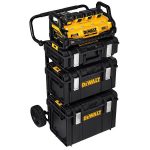 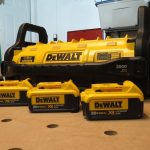 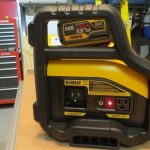 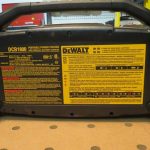 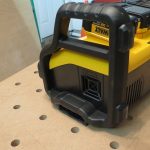 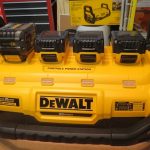 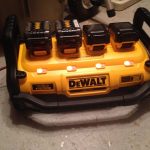 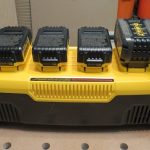 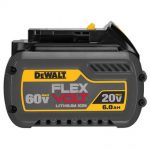 Michael Hopp is a registered contractor in the State of Rhode Island. He has been registered for the last 16 years specializing in interior and exterior remodeling, doors and windows.Mike began practicing his trade 25 years ago at William M. Davies Career and Technical High School in carpentry shop. This gave him the opportunity to become an apprentice at Brodeur Window Distributors. Mike continued working at the company for 10 years. During this time he was in charge of the specialty door shop and assisted on service calls.For the last 16 years, Mike has been working as a general contractor in Rhode Island with his company MJH Construction LLC. Even though his background is in doors and windows, his passion is for remodel work.

All posts by Michael »