Dull knives are dangerous because a dull blade requires more force to cut and can result in blade slipping off and missing the cut. A sharp blade is predictable. 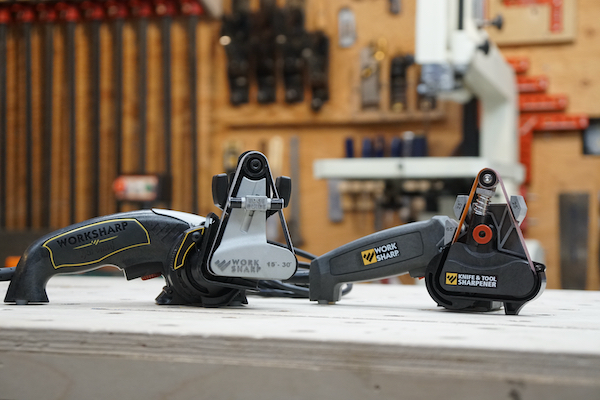 We’ve been using the Work Sharp knife and tool sharpening system for almost 10-years to keep our tools sharp.  Being able to look-back that long allows us to better evaluate and help you make better purchase decisions.  [Check out our Work Sharp Tool Sharpening System – 10-year lookback[

Work Sharp is a 4th generation, family-owned company based in Ashland Oregon. They also make the Drill Doctor – a drill bit sharpening tool.

Over the last 10 years, the Work Sharp system allows me to sharpen any profile edge; straight or recurve. It works by using a flexible abrasive belt and precision sharpening guides.

It’s neither difficult nor time-consuming, to use the Work Sharp knife and tool sharpening system to sharpen a knife.  Once you learn the technique it requires very little effort to accurately and precisely sharpen knives and tools.

The sharpening system allows me to avoid sending tools out for sharpening.  A couple of years of using a sharpening service will cost more than investing in this tool. 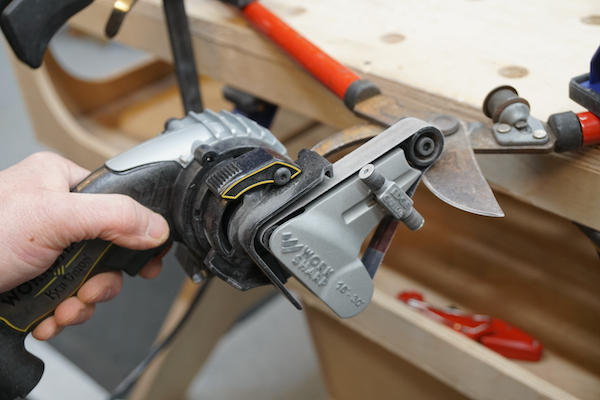 What I like about this tool, besides the fact that it paid for itself in the first year, is that I can be used  on multiple edged tools, such as: 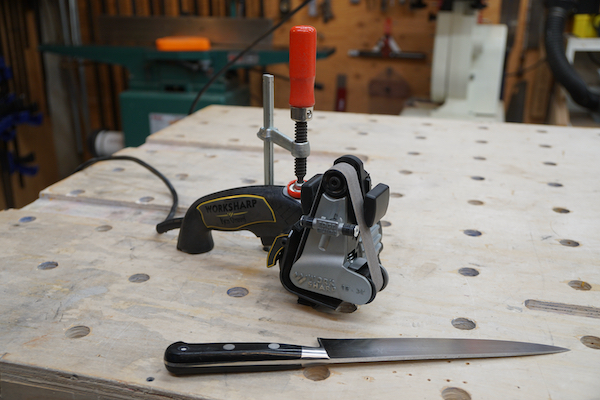 Work Sharp offers two versions of this tool, and I’ve used both. The original KTS sharpening system and the Ken Onion version. There are three key differences, between the two, that you need to know are: 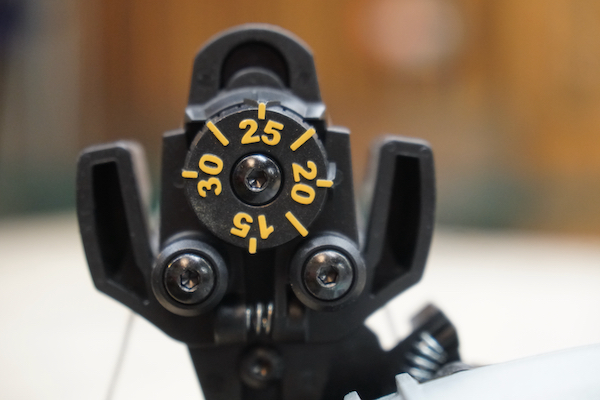 The Ken Onion Version has a variable-speed trigger that allows you to increase the speed for faster sharpening or decrease it for a more precise approach. The variable speed is managed through the trigger, the more you pull the faster it goes.

The Ken Onion version also has a heavy-duty motor that weighs twice as much as the original KTS version. This additional weight comes from the larger variable speed motor, larger overall size, and cast metal components.

The original KTS can be run on Intermittent or Full power, non-variable speed. 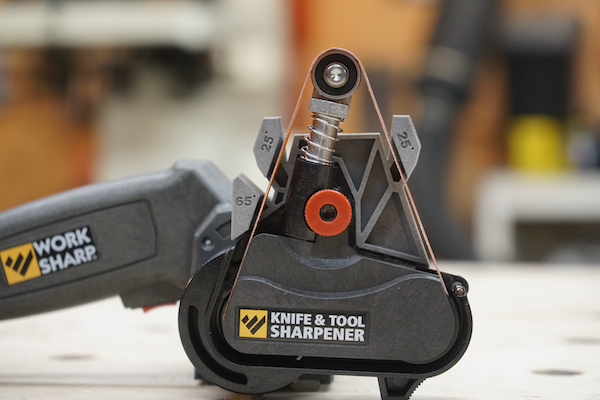 The five belts offer you a wide range of grits to perform tasks as coarse as grinding and as fine as polishing an edge.

The P120 is a coarse belt that can be used for grinding or for fast stock removal from knives. This is a quality coated 3/4″ x 12″ fabric belt. 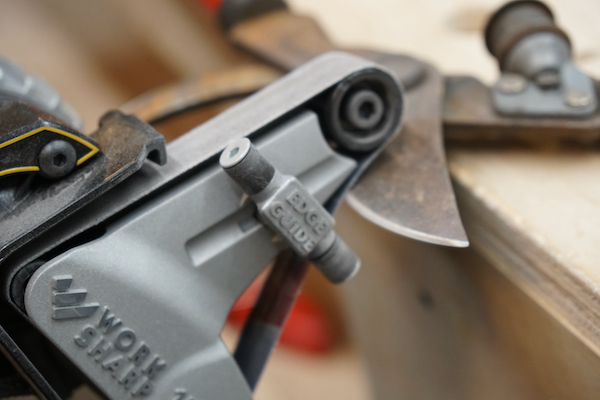 X65 Norax Belt – This 3/4″ x 12″ belt features 65-micron aluminum oxide abrasive particles. This translates to roughly a P220 grit. This is a coarse belt that can be used for most coarse sharpening needs.

X22 Norax Belt – This 3/4″ x 12″ belt features 22-micron aluminum oxide abrasive particles. This translates to roughly a P800 grit. This is a fine to a medium belt that can be used to refine a coarsely sharpened edge or refine an edge that is starting to dull.

X4 Norax Belt – This 3/4″ x 12″ belt features 4-micron aluminum oxide abrasive particles. This translates to roughly a P3000 grit. This is a very fine belt that can be used to put a very fine edge that is almost mirror polished.

The 6000 grit belt is used to put the finest razor-sharp edge on your knives. This 1/2″ x 12″ thinner belt conforms to your knives so it can be used to sharpen serrated edges as well as heavily curved edges like gut hooks. 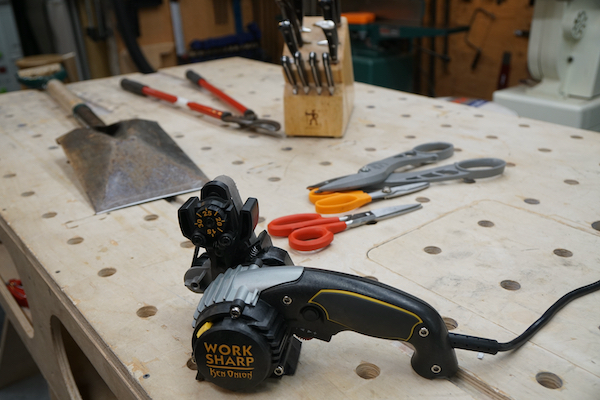 Some of the toughest knives to sharpen are knives that have a re-curve or a concave edge. The flexible belt design allows you to easily sharpen these knives. The Ken Onion Edition will even sharpen a concave gut hook on hunting knives.

This versatile sharpener will also tackle scissors and tools. A scissors guide will easily and quickly sharpen common household scissors to a 60° angle with no setup time 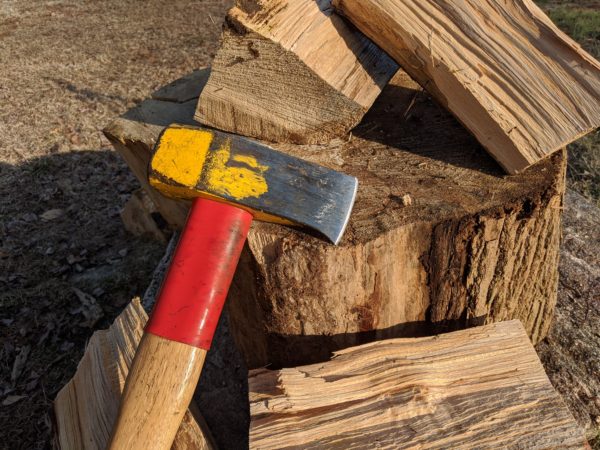 The angle guides for each tool are removable and expose the belt on the triangle cassette. This can be used to sharpen a wide range of common shop and garden tools such as lawnmower blades, axes, shovels, pruners, and more.

While not designed for it, carpenters and woodworkers can also use this tool for sanding or smoothing in tight spaces due to the triangle design.

The KTS unit cost approximately $70  and the Ken Onion unit is priced at $130. I personally use the Ken Onion version as I like the adjustable angle feature and variable speed trigger.

Check out what Rob thinks of this tool, adfter using it for almost 10-years in his shop. 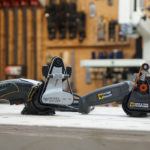 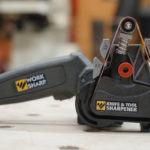 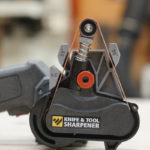 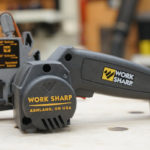 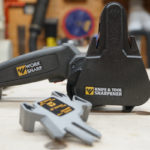 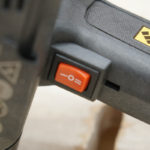 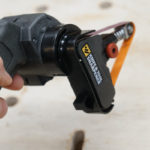 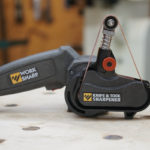 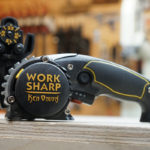 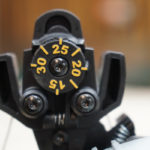 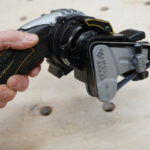 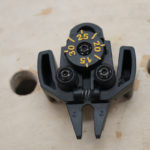 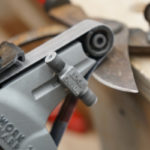 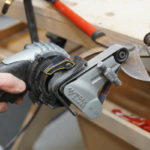 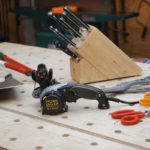 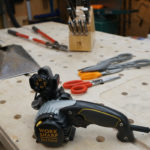