Home » Latest Tool Reviews » Power Tools » Saws » Track Saw Comparison – Which One Is Best For You?

Track Saw Comparison – Which One Is Best For You?

Rob and some of his crew took a hard look at the major Track Saw models on the market and see how they “lined up”. With hours in the shop and critical analysis of each saw’s features and performance we are providing readers with a comprehensive look at each saw’s bright-spots and areas for improvement. These tools allow you to make long, clean, straight, cuts in sheet goods, trim, and framing stock without lugging around a table saw. These are incredibly useful and versatile tools that more and more carpenters (and not just cabinet makers) are using on the jobsite. 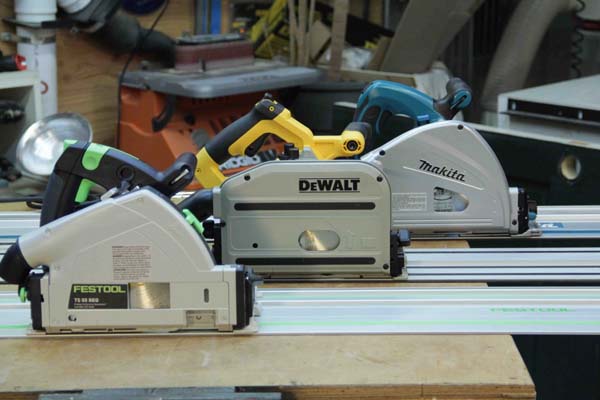 This article encompasses the results of a DEWALT Festool and Makita Track Saw Head to Head, which includes our choices for best saw in a variety of categories from saw performance to model features. Think you’ve found the right saw for you? Then follow the links to a detailed review of your preferred model!

Adjustments & Overall Ease of Use

The Festool TS 55 REQ, with competitive bevel range (-1 to 47 degrees), positive stops, micro-adjustable depth, clear front-of-cut viewing, a unique waste-side splinter guard, and the easiest blade changes of all the saws, the Festool wins for all-around ease of use and advanced features. Like most Festool products there is a lot going on with dials, adjustments, etc. The company makes precision woodworking tools, so although the saw is much more complicated than the competitors, it’s ease of use and intuitive controls and adjustments makes it shine in this category. 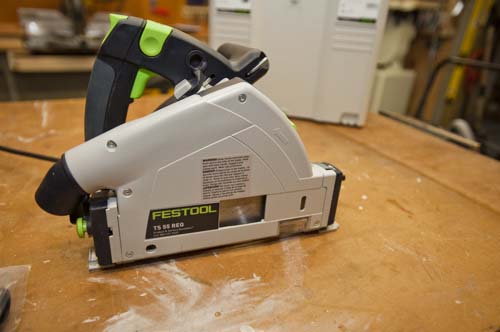 Makita has a straightforward approach to its adjustments that is simple and very easy to use. The blade change only requires one more step than that of a traditional circular saw. The only criticism from us is that the back bevel locks, generally a rare cut anyway, are tucked away, being located between the motor housing and the baseplate. Makita kept the saw simple, but packed it with useful and versatile settings. The SP6000J boasts a -1 to 48 degree bevel range and it’s ease of use makes it a close second in this category.

The DeWalt DWS520 also has a simple to use depth adjustment and bevel, but lacks a positive stop at 45 degrees, meaning you need to break out a square to get an accurate 45 degree bevel. The saw’s position in this category is primarily due to the awkward blade change. The blade change mechanism is far more complicated than that of the other saws and locking the plunge and arbor is finicky making for a slower and frustrating blade change. Putting the DEWALT model in last for adjustments and ease of use.

By the numbers, the Makita and DeWalt are tied here as far as amperage (at 12.0 Amps) but the Makita SP6000J boasts a 1,800 watts out which during operation which made the Makita feel faster and more powerful. Making it our winner in this category.

The DeWalt has solid power as well, with 1,300 watts out, and has no problem ripping stock quickly, putting it in second for this category. The Festool has less power overall compared to the other two saws, at 10.0 Amps with 1,200 watts out, and slows down a bit more quickly than the others in more difficult materials putting it last in the Power category.

DEWALT is the winner here, “hands” down, with very well-formed and comfortable handles with lots of overmold grip. The plunge mechanism on the DeWalt is done with linkage rather than a pivot. This means no odd wrist rotation when starting the cut but is also a little odd to use at first as it feels very different from the other two saws in the test, but regardless the major investment in ergonomic research from the folks at DEWALT paid off here. 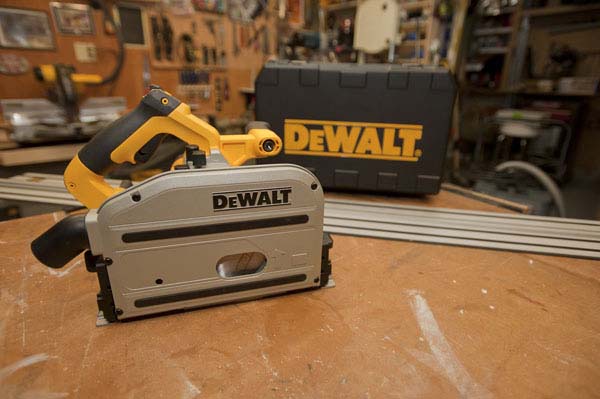 Makita’s SP6000J places second with nicely formed handles that are very comfortable to use but don’t surpass the comfort of the DEWALT. The plunge action is very similar to that of the Festool, very smooth and comfortable, but again the awkward placement of a few adjustments hold the saw back as far as comfort, like the back bevel buttons mentioned previously and the oddly placed bevel detent override knobs.

The Festool TS 55 REQ features more of a stick style to the handles, with just a bit of over mold on the back of the primary handle. Bottom line, they simply aren’t as nice to put your hands on as the other handles.

DEWALT comes with a unique anti-kickback device that is integrated into the base plate of the saw as well as a riving knife, making it the safest saw based on our observations in the test. The Festool TS 55 REQ comes with an accessory, read NOT included, anti-kickback stop that is attached to the track and it also has a riving knife putting it in second in this category. 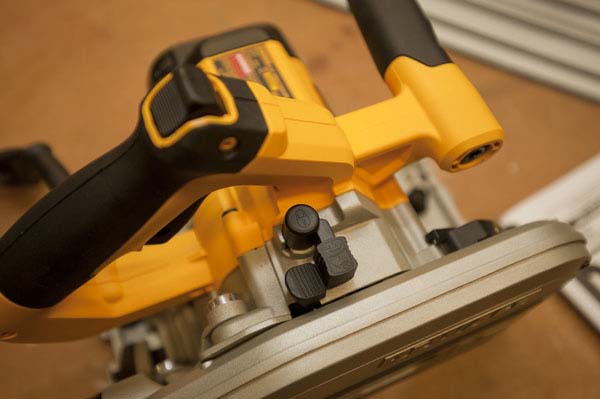 Finally, the Makita SP6000J has a unique anti-tip feature that engages with a groove on the track to prevent the saw from tipping, especially when making bevel cuts. But with the lack a riving knife or any anti-kickback device we put the Makita in last. Although, the lack of riving knife proves to be quite useful during some plunge applications, as the riving knife can sometimes cause more problems than its worth.

Budget is an important consideration when buying tools. Currently Makita’s is the lowest priced, with DEWALT coming in second, and Festool being the most expensive (no surprise there). In fairness most users recognize that Festool is almost always considered a different class of tools, but as other components of our test demonstrate the DEWALT and Makita produce as high a quality of cut and deliver excellent dust collection. 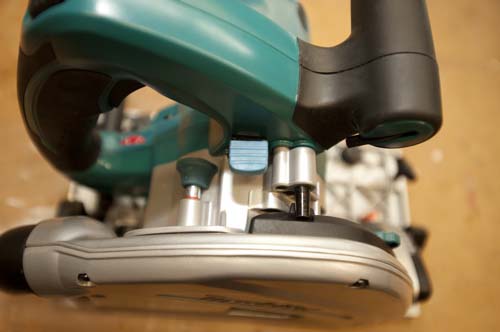 This is a precision tool and needs a good case for protection and accessories. Systainers are known to be durable and easy to use. The case insert has molded spaces for all the accessories that come with the saw and even space for the accessories that are NOT included. There’s also a photo on the cardboard insert on the underside of the lid that shows you where everything goes. Finally, because Festool features the removable power cord, you will never run into the age old case problem of no room for the cord! 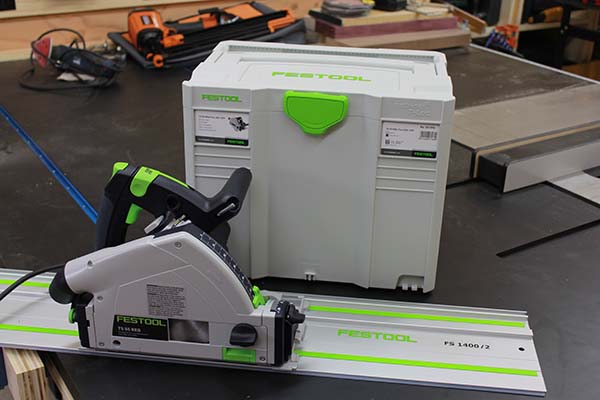 The Makita SP6000J comes with a roomy plastic case with molded spaces for some accessories and plenty of room for the rest. The saw does not seat as well in the case as it does for the other saws but the size is right so the tool does not move much in the case. We put the Makita case at second place.

The DEWALT DWS520 case is good sized but doesn’t have an easy spot to store basics like track clamps and the cord while generously long is a bit stiff and hard to coil up and get in the case. DEWALT comes in last in this category.

Accessories can really enhance the overall usefulness of a tool, by expanding its capability and scope of use. Not really an objective view of the tool but we found it important to review for this head to head. With “System Integration,” Festool has a wide array of accessories that allow for use of the tracks with other tools in the Festool line and allow for a great deal of versatility with the TS55 REQ. This includes the usual:

However, do not enter into this system lightly, as the cost for this level of engineering and quality is very high. As we discussed previously the Festool is not cheap. 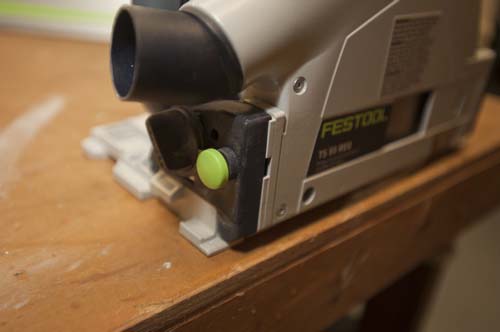 Makita’s SP6000J and DEWALT’s DWS520 are pretty much tied in this category and feature miter gauge guide rail attachment, router guide base (keep this in mind if you own a DEWALT or Makita router), guide rail connectors, and clamps. Makita does makes a rip guide similar to a circular saw rip fence, which is great when you want to use the saw on small work pieces that would make the 55″ track awkward to use. Unfortunately, this doesn’t put the Makita ahead over the DEWALT. Bottomline, you can’t really compare these saws to the myriad of accessories that Festool offers. 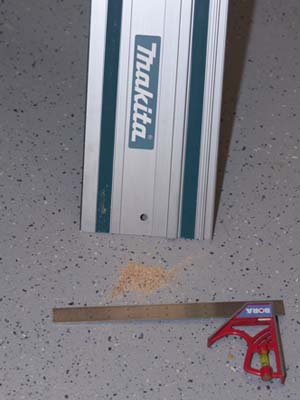 There’s a huge emphasis on dust collection these days due to safety concerns with prolonged exposure to most kinds of dust. Good dust collection also makes for a cleaner jobsite and a happier client in cases where you’re working in occupied spaces.

Regardless, our tests resulted in a three-way tie here as all the tools performed admirably, with no discernible difference in the amount of dust that escaped collection. Which was very little all around. As you can see from the photos the volume of dust that we swept up from below the cut was minimal considering that even a table saw hooked up to dust collection would leave more behind even when used with a wet dry vacuum or dust collector. 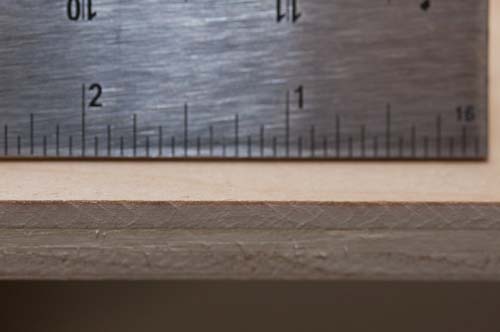 These are precision tools that need to provide a very high quality of cut to be viable contenders in their field. Here too we found that there was little difference in the quality of cut when we used the same model of blade on all saws. There was minimal tear out on cross cuts in veneered birch ply, a light brushing with 220-320 grit sandpaper would get rid of it. With the stock blades the cut quality was very similar and excellent in all cases. 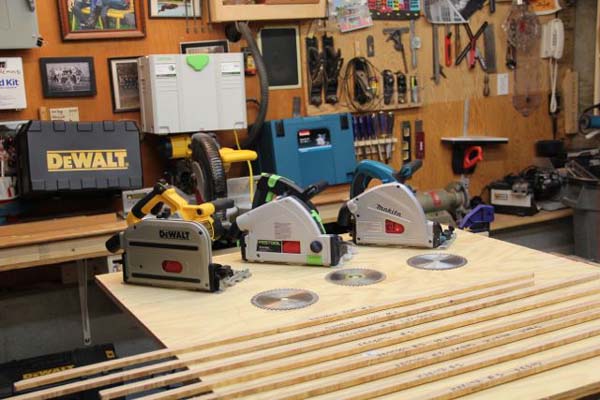 The ease of use, features, huge range of accessories, and refinement of the Festool make it the real winner. However, the other two tools are solid performers with excellent quality of cut, have their own unique features, and are still easy to use. If your budget or personal preference mean you’d prefer either the Makita or DEWALT you really can’t go wrong with any of these tools. 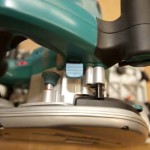 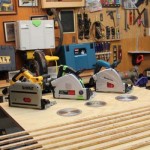 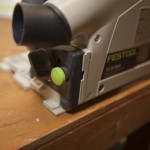 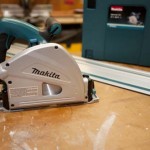 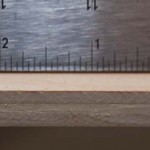 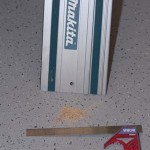 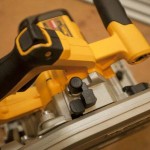 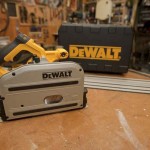 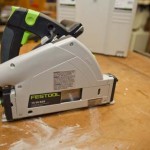