Weight: 62 lbs.
Tool Box Buzz recently tested out the Evolution Powertools Metal Chop Saw (model S380CPS) as part of our goal to expand our testing and coverage of metalworking tools. And a cold-cut chop saw is a pretty essential tool in any metal fab shop. Right up there with a MIG or TIG welder, angle grinder, and drill press. It lets you quickly cut a variety of metals with the precision and clean edges required for grind-free tack-up and weld-out. We paired up with Rusty Boards Handcrafted Furniture to test it out cutting some mild steel flat bar, HSS tubing and angle iron. And we walked away pretty impressed and with a lot of time saved. So let’s get into the details! 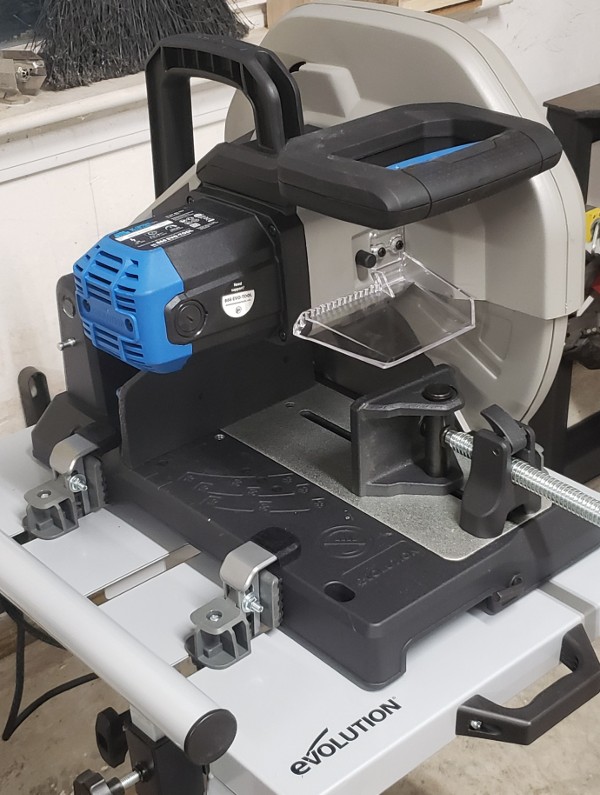 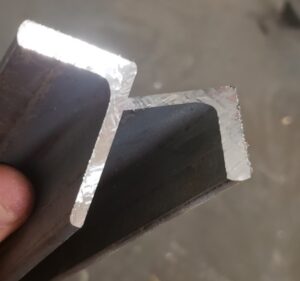 Sustained power and torque and critical factors in metal cutting since blade slowdown or torque loss can have a variety of negative effects. Since the Evolution Powertools Metal Cutting Chop Saw (Model S380CPS) is a corded, 120V 15A tool, w expected consistent power from the motor. And thankfully that is what we got. We cut 1/2″ mild steel plate and 11GA stainless steel sheet pieces with no issues. The S380CPS has no cut speed or resistance indicator light. These are often designed into cordless abrasive cutoff saws as a battery and consumables protection feature. But the S380CPS doesn’t need one. And since this saw draws from a 120V power supply, the torque remains constant regardless of material (within the provided specifications). Note – We didn’t test any materials outside the company specifications on our applications.

As a general fact, cold cut saw blades, as opposed to an abrasive cut off saw are quite expensive ($80+ vs $6-8). But you get what you pay for… and for a few reasons: 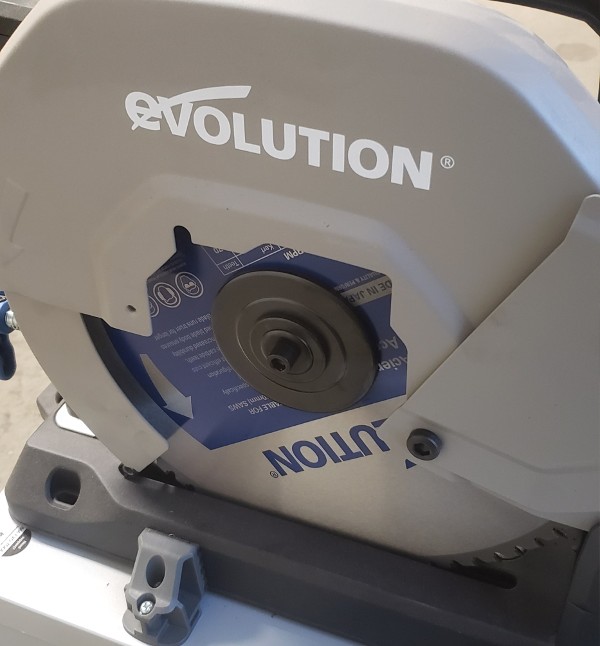 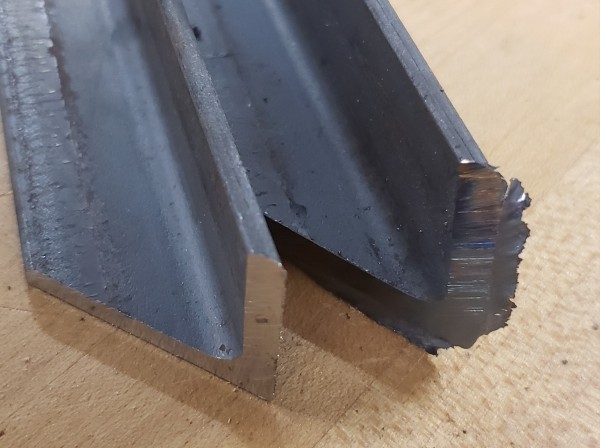 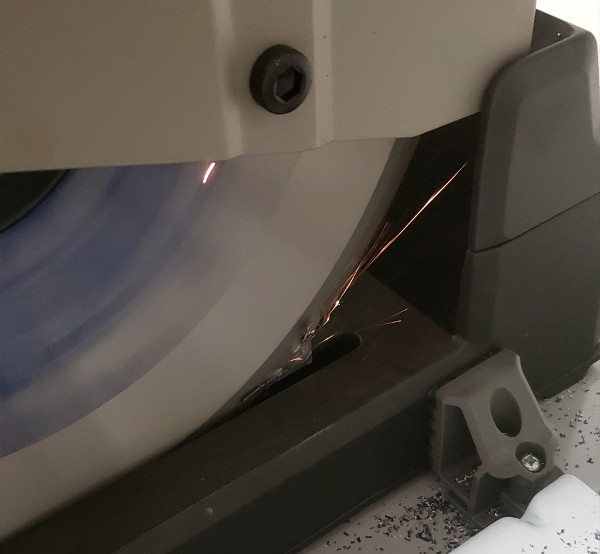 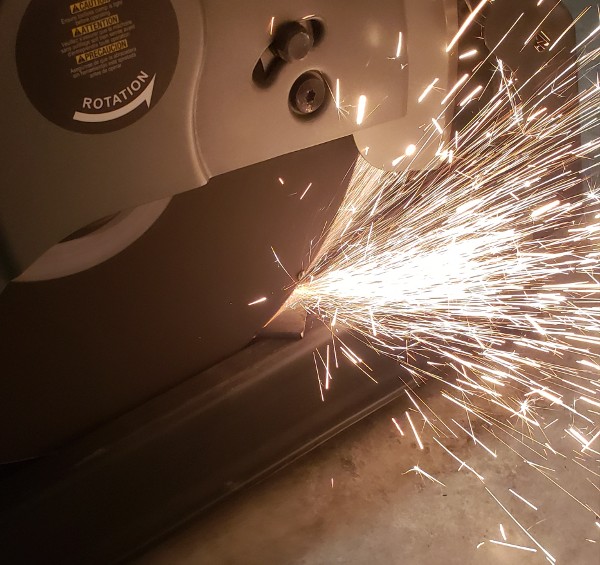 One of the issues we’ve noted with other metal chop saws is the blade alignment. They are sometimes not centered on the blade slot. This makes eyeball alignment trickier. The Evolution S380CPS blade is though and it was a small detail that was greatly appreciated. 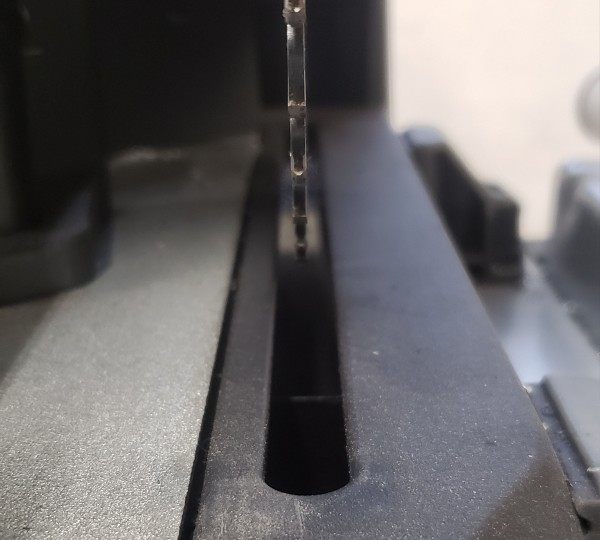 This earned its own section for a reason since this is the major upgrade over the less expensive Evolution Powertools S355CPSL. The adjustability was great, and the accuracy was spot on. I cut a couple a number of 45-degree angles and used my corner clamp to hold them in place while welding. The angles were consistently gap free and smooth. 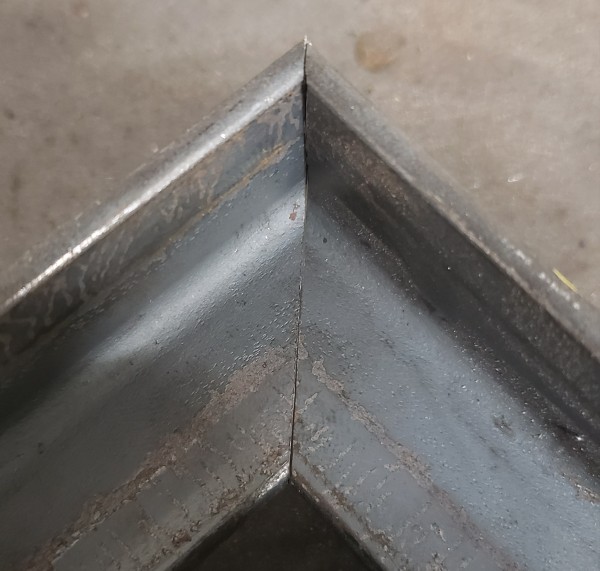 Moving the miter gauge forward and backwards (it has 3 settings) was also a breeze. Like other competitor models, there it features a 2-point locking design. There is a right mounted bolt that passes through a tighter fitting pivot hole and a curved slot with a internal spring tensioned adjustable lever. These combined to make for easy adjustments and secure positioning when tightened into place. The detent and angle markings were also easy to read and spot on! 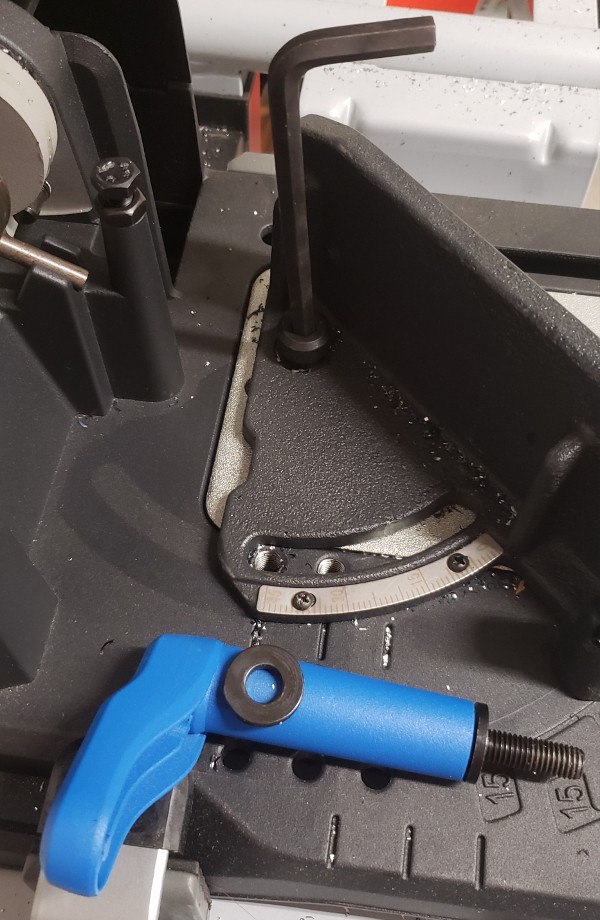 We love it. Again, it’s the details that matter. And 2 stuck out after extended use. First, the vise pivoting (front) fence is comfortably close to the tool base. This matters a lot because when clamping metal with uneven top and bottom clamping (Most commonly — angle iron) it does a better job of keeping the material vertical and flush against the back fixed rail. This is critical for accurate miter angles and the S380CPS did well in this area. 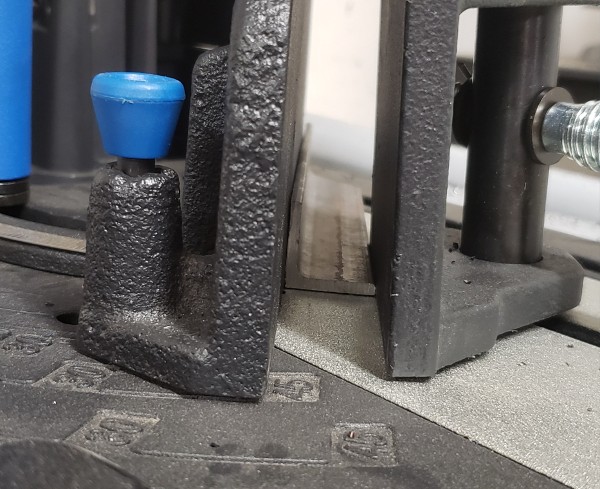 The Miter detent adjustment knob also features an offset locking pin. To engage you simply pull the pin up, turn 90 degrees, and let the pin catch in the molded grooves. It’s a small thing but when you have to frequently change miter angles its great no tot have to hold the pin up while setting the angle. It also prevents a tensioned pin from gouging the base if you got lazy and didn’t keep it pulled up after releasing the detent. 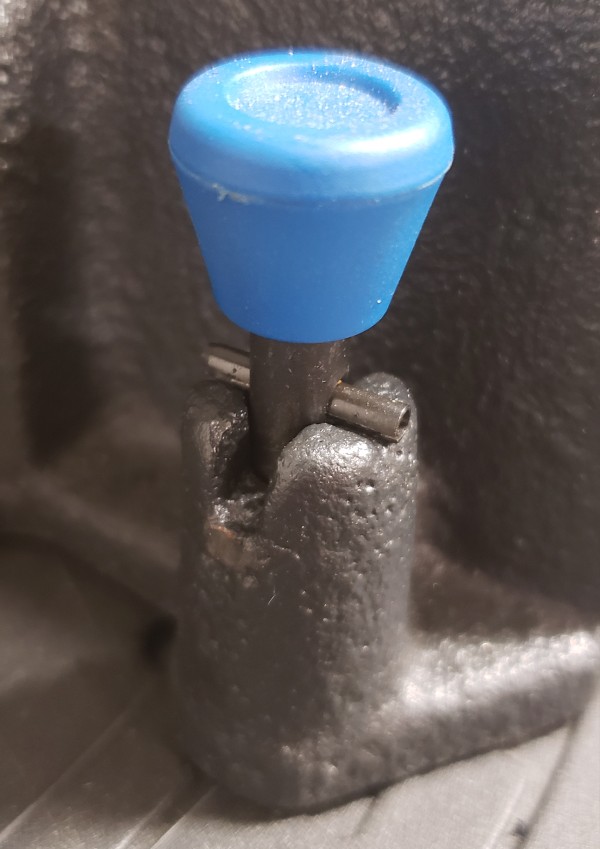 We appreciate chip guards, although we might not love them as much as OSHA does… So we were glad to see a very basic and transparent chip guard included on the Evolution S380CPS Saw. A chip guard on any metal cutting circular saw is good at blocking some of the chips but don’t expect any guard to block them all. This guard met that basic goal. But having an all-plastic guard on a metal cutting saw is asking for it to get broken. We recommend that Evolution looks into a metal framed polycarbonate guard. This would make it more durable while retaining the ability to see where your cutting – a critical safety practice this saw still allows. 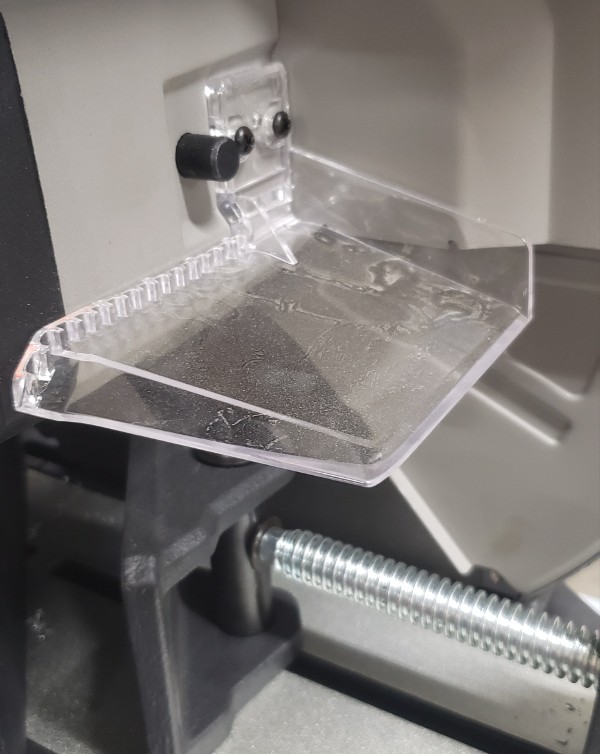 Good news… The Evolution S380CPS features a 2-stage handle. This means that you must press the toggle lever on the inside of the trigger before you can actually pull the trigger to engage the saw. Bad news… its optimized for Right-handed users. We aren’t throwing too many spears at Evolution though because with the blade side-mounted to the motor they really didn’t have any other option. This is a different consideration on a true blade-pivoting style miter saw though. But not on your standard chop saw. We did test out the saw left-handed anyways and it was okay since the vise worked so well. 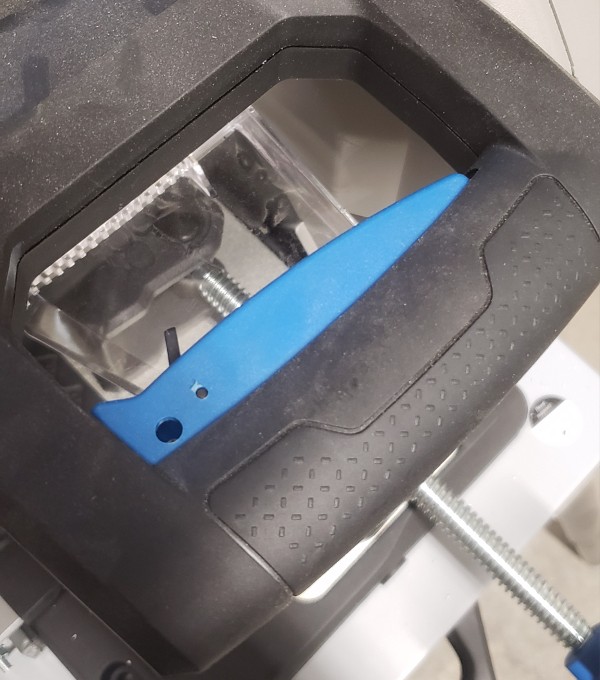 This feature, much like the chip guard, falls into the “it works, but manage your expectations category.” Again, not really a big spear at Evolution as it’s tough to control flying metal pieces from a high-speed spinning saw blade. But we can say that after using the saw, many of the chips DID end up in the tray. And some others made their way onto the floor around the saw. Not a huge deal. That’s part of life when you’re fabricating… But it was nice to catch and empty some of them from the tray. We would recommend Evolution gets rid of the Allen lock. It makes for a very unnecessary step of having to pop the Allen wrench out. We think they should just put a grippable knob and make it easier for the user. 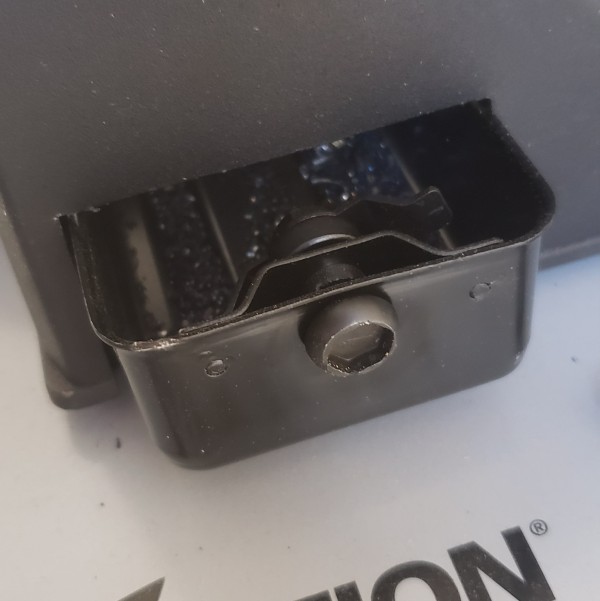 Also, the tray is 16 in. long so you have to pull the saw 17 or so inches away from the wall to get it out. We wondered if there was a way to make it slide out from the side vs. the back to make tight space installation easier. 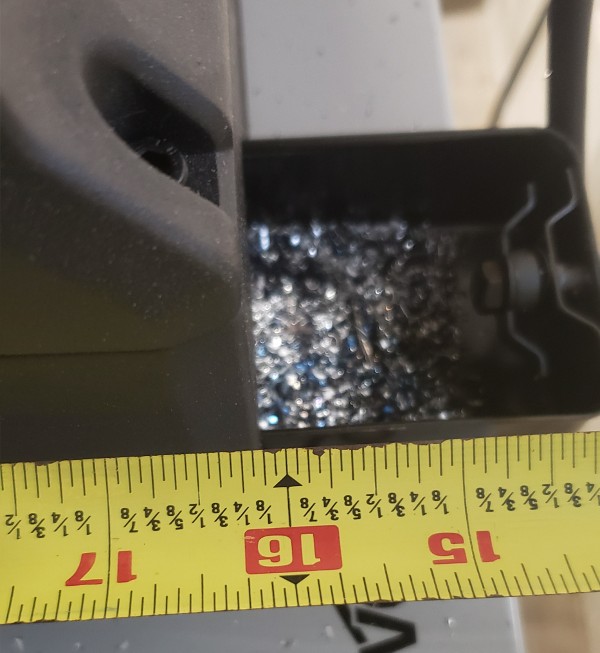 The S380CPS came with a couple great accessories – the 15″ Blade and the Collapsible table. I loaded the 15″ blade up right off the bat. What does it give you? Easy. A greater cutting capacity and a slightly longer lasting blade. Both are a function of basic math. A bigger blade has a larger radius and circumference. Bigger radius = bigger cutting depth. Bigger circumference = longer cutting area per revolution.

The universal table (easily works with other saws) has excellently designed clamping feet. They clamp along both the X & Y axis, or downwards and inwards. Another nice detail was the threaded through bolt combined with a secondary lock nut. The threading action kept the bolt in place while adjusting and then the locking nut secures everything with zero chance of coming loose. It’s a great design. 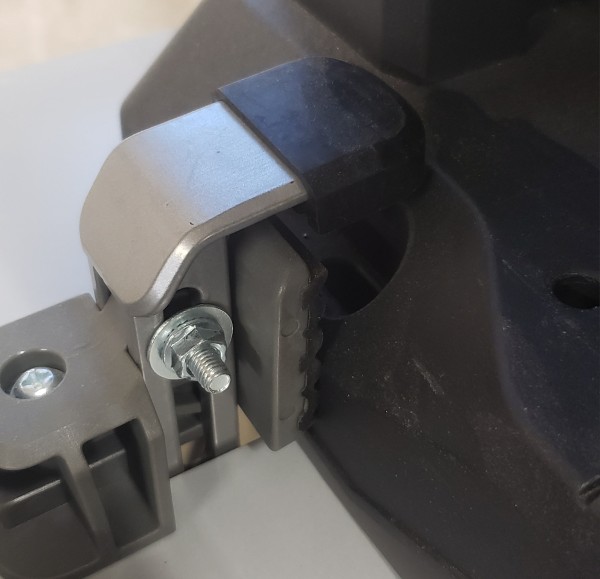 it also has easy to operate lever releases for leg closure. We appreciated no need to pinch your fingers trying to push the locking pips in directly. The levers made taking down and setting up the table very simple! 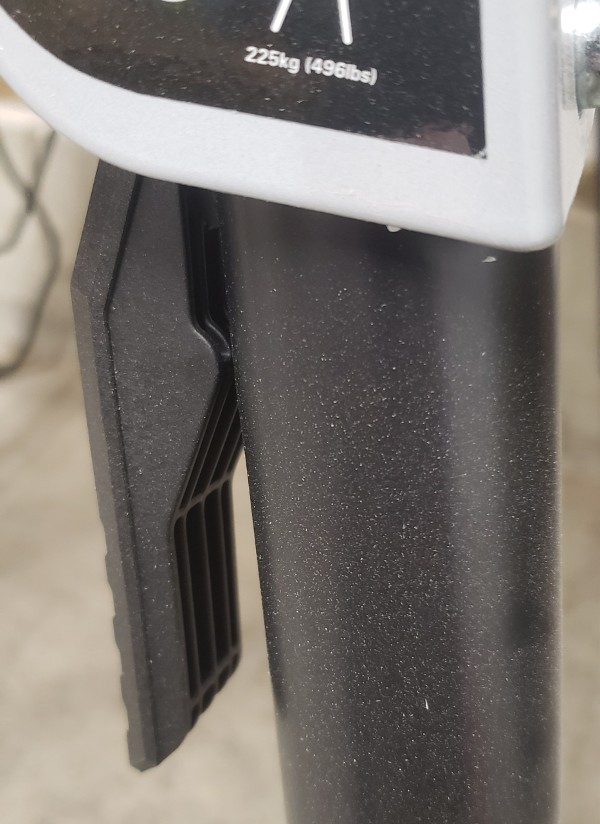 However, it’s worth noting that the indents designed into the S380CPS don’t necessarily match up perfectly with the table locking feet/pads. We know this because after initially locking down the saw and loading up the first piece of steel angle to cut we had issues. The locking foot prevented the angle from resting continuously along the fence. It was an easy fix to readjust the locking foot locations though. So this really isn’t a knock on the S380CPS. Just something to be aware of during initial set-up. 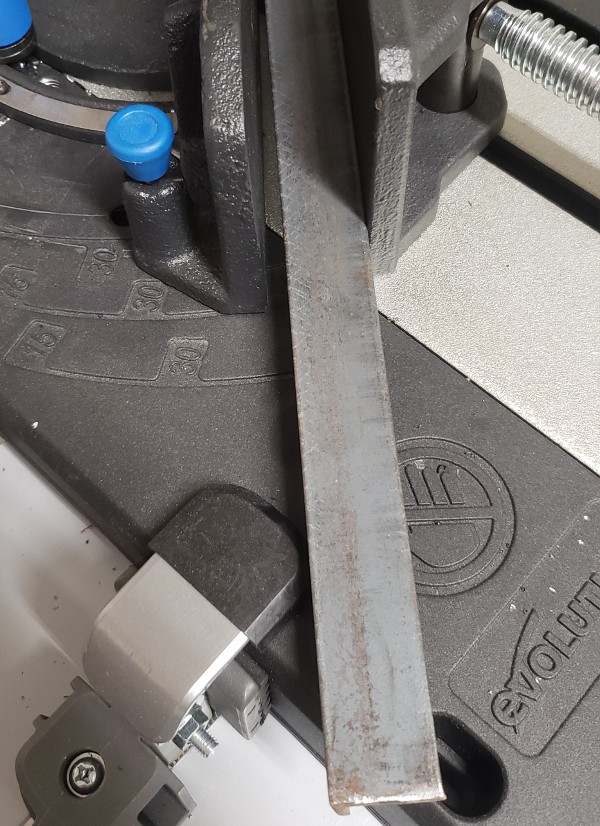 So we’ve discussed a few recommendations already, but we’ll add one more. The design of expanding the support arms on the universal table was one of our least favorite parts of this test. it requires the operator to reach under the table at an awkward angle to turn the locking knobs. We’ve seen other stand/table designs that have top-mounted levers or knobs that work much better. 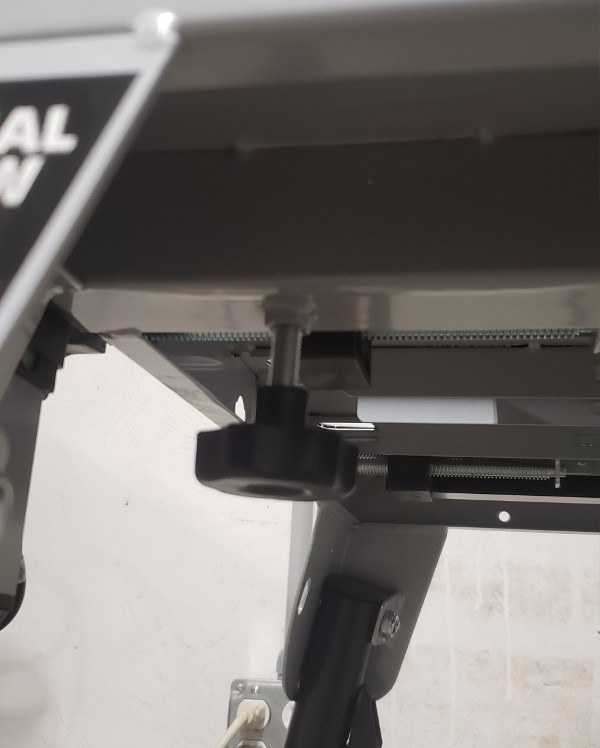 The Evolution Powertools Metal Chop Saw (model S380CPS) is a sweet saw that is worth every penny. Does it cost more? yes. but it is worth the investment just for the time saved from the simple and fantastically accurate cuts that are immediately ready to weld. It is also more than worth it for the increased safety – minimal sparks or chance of broken cut off wheel pieces means more peace of mind. But there are great secondary considerations too. Like the ability to easily move the saw around the shop or to a jobsite when needed – something not easily done with a larger horizontal bandsaw. While there are minor areas for improvement such as more detents and better shavings collection designs, these are very minimal critiques. We can’t say enough great things about the overall value and performance of the Evolution Powertools S380CPS!