As we mentioned in our other Milwaukee Tool preview posts this week, we have just returned from the Milwaukee Tool 2014 New Product Symposium where we saw and tried all sorts of new tools coming this fall and winter. If you were unable to follow along with us on our Facebook or Twitter feeds, we also put together an overview video of some of the great new products we saw. A couple of products you won’t find in there though are the new M18 XC5.0 Battery Packs and the M12/M18 Rapid Charge Station. These tools are so new that the marketing department hasn’t even written the press releases yet. 5.0 Ah is a natural progression

The 2013 Symposium saw the introduction of the 4.0XC packs that are powering a lot of the FUEL tools out on the jobsite this year. It seems like a natural progression to release the next size up. The 5.0 amp hour is the benchmark that a number of the major brands are working towards in 2014. Makita is the only one lagging behind and has yet to release the 4.0 pack in the US. With the new 5.0 pack comes a 25% increase in runtime and no difference in size and weight from the 4.0 pack.

Some tools like impact drivers and blowers have relatively level use of power. Other tools though like drills and circular saws can draw near 200 watts when the going gets tough. These power intense operations cause the batteries to discharge at relatively high rates and this causes heat to build up. Heat is an enemy to batteries, when they are outside of their optimal range they don’t work nearly as well. Milwaukee recognized this and incorporated large heat sink like areas as part of the weld frame of the 5.0 batteries. One of the demonstrations at the symposium was showing the heat buildup between their pack and a competitors during a power intense operation. Managing battery pack temperature will become more important in the next few years as more cordless tools replace corded ones on jobsites the world over. Heat isn’t the only enemy

Water and shock are well known battery killers as well as heat and the new 5.0 pack has a few built in features to mitigate these failures. First they sealed off the interface points between the tool and pack. This includes the electrical contact area in addition to the plastic release tabs the hold the pack to the tool. The second “water” feature is that they coated all the electrical surfaces (battery cells, weld frame, circuit board) with a liquid-applied thin film to keep them from corroding when exposed to prolonged moisture. The third feature in the battle to keep out moisture is the inclusion of weep holes at the bottom of the pack so any water that does get in has a clear path to exit.

When it comes to shock, rubber is the primary method of protecting the pack. Individual cells are separated by small rubber bumpers that fit inside the cell carrier and then the battery shell has a rubber over-mold over the bottom of the pack (but not covering the weep holes).

The M18 Six Pack Charger was released in 2013 and at the time was pretty great. It held 6 batteries but only charged them one at a time and it only charged M18. With the advancements of brushless tools a lot of M12 tools are mixing with their M18 brothers on jobsites. Milwaukee addressed both issues with the M12/M18 Rapid Charge Station. Now both batteries can be charged together and 3 can be charged at a time. Think of it as three of their Multi voltage single chargers plugged into a 3-way outlet. I’ve been waiting for a tool like this ever since the Ryobi Supercharger and the Milwaukee Six Pack were released. 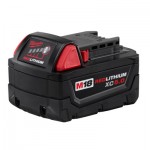 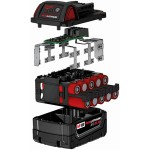 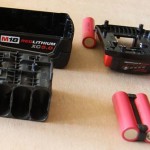 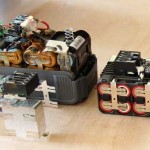 Competitors pack and Milwaukee pack after 3 days in water 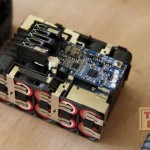 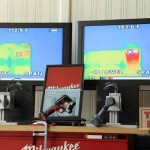 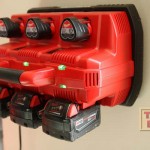