The first week of February 2020, we attended the World of Concrete trade show in Las Vegas. Every year the show is just enormous taking up the entire convention center and outdoor lots. There are tons of new products, equipment, and of course tools. The show only lasts 4 days and that isn’t enough time to see all of the innovations in the concrete and masonry industries. The tool manufacturers in the outdoor lots are always the big draw for us. The Bosch Tools booth was particularly impressive this year with a number of new and noteworthy introductions. 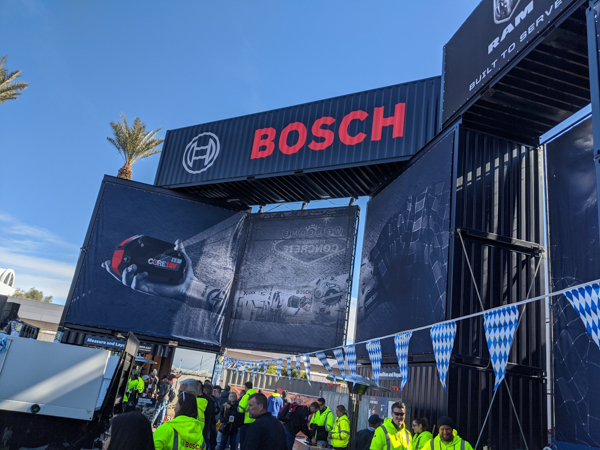 Upon first entering the Bosch Tools booth, the first thing we saw were the 3 new rotary lasers, dubbed Revolve. They come in 1000, 2000, and 4000′ options. Now I’ve had a ton of experience on the old Bosch GRL 500, it’s my current rotary laser, but there were some things that bugged me about it. This new line of lasers addresses those issues and then piles on additional features.

First they come in multiple ranges so a contractor can pick the laser that meets their needs and budget. Second, all of them are available in a V variant meaning they can be used on their sides as a vertical laser. In fact they can be mounted on the tripod on their side. This is great for straightening long runs of walls. And third, all of the lasers can change batteries while leaving them on the tripod and the 4000 can use a core battery or D-cell batteries. 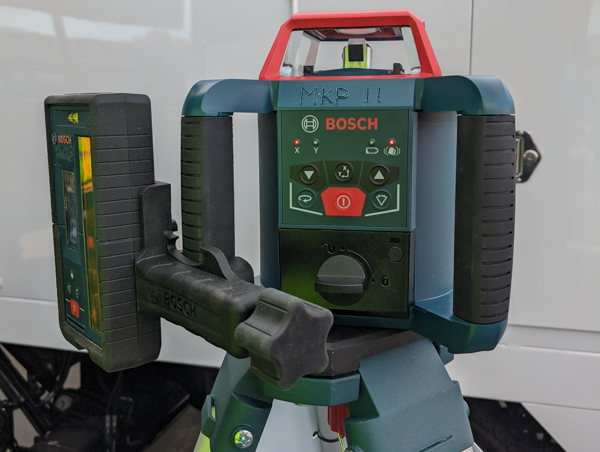 So let’s talk about the flagship of the Revolve line, the Revolve 4000. This has an impressive 4000′ range and can run off of the Bosch Tools 18V Core battery or a 4 D-cell adapter. It has an IP 68 rating meaning they can withstand dust, dirt, and debris and can be submerged to 1.5m for up to 30 minutes. If it’s pouring down rain, this laser won’t let any water in. It has dual slope that’s perfect for grading applications. It can be connected to an app on your smart phone where the unit can be powered on/off, dialed in slope, or the best part uCal.

uCal stands for user calibration, meaning that you don’t have to send the laser off to the service center to get calibrated. You can do it yourself right in the field. This is huge! I can’t tell you the number of times my guys have tipped over another brand laser on the job and off to the service center it has to go. The company I used to work for kept two spares around just for this reason. 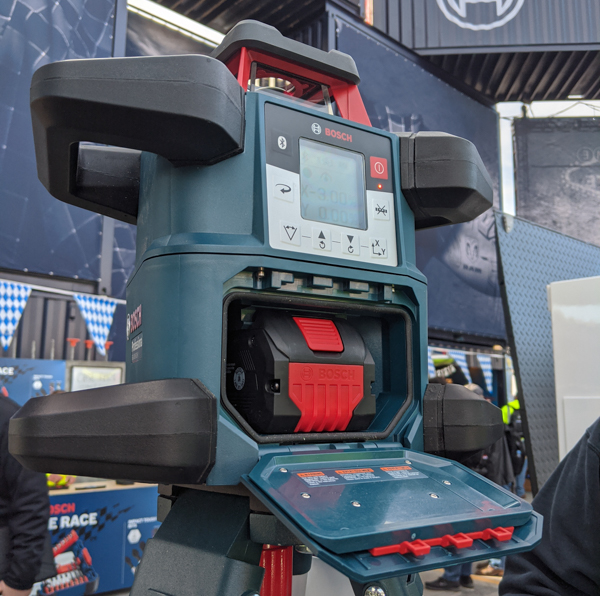 The next impressive thing we saw at the Bosch Tools booth was the X-Lock grinder accessories interface. We first got a look at X-Lock at STAFDA but it was great to see how many different wheels are available for the interface. X-Lock is so easy and simple that the first time you see it in action you can’t help but say to yourself… “now why didn’t I think of that?!” Just push the wheel on, click, and go. To remove just pull the leaver and the wheel drops right off.

The best thing about X-Lock though is that Bosch is licensing it to other companies. Not just accessory companies but some other tool manufacturers. Did you know Bosch also created the SDS interface in rotary hammers? Mark my words, X-Lock will soon be the standard for grinders. 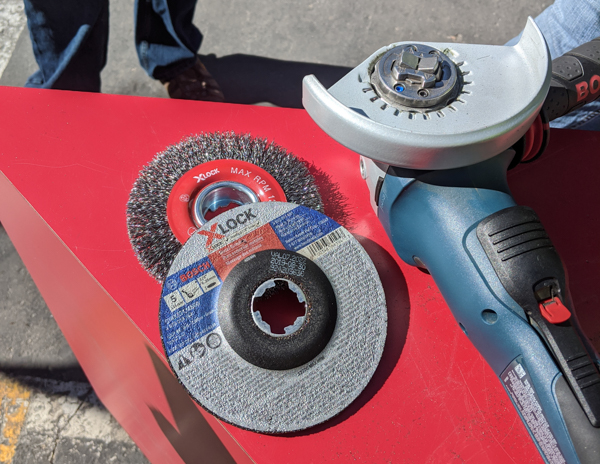 Last year when Bosch released their corded track saw to the North American market, people were saying two things. The first was how smooth it was. The second was why isn’t it cordless?! Well now the smoothest saw on the market has gone cordless. We don’t have a ton of details on it yet but it will be available this year.

The saw, model GKT18V 20GC, runs off of a single Bosch Core battery and fits all of their existing track on the market as well as a number of other brand’s tracks. The blade is 5-1/2″ inches in diameter which at first seems like a huge negative but we’re speculating that the size is due to being powered by one 18 volt battery instead of other brands that may use 2 batteries/higher voltage. If you’re speculating that this blade size may be hard to find, remember that Bosch owns Freud/Diablo so you can bet this size will be on the shelf at your local Frued/Diablo dealer or Home Depot. We’ll be sure to update when we have more details but also be on the lookout for our cordless tracksaw head to head sometime late spring or summer. 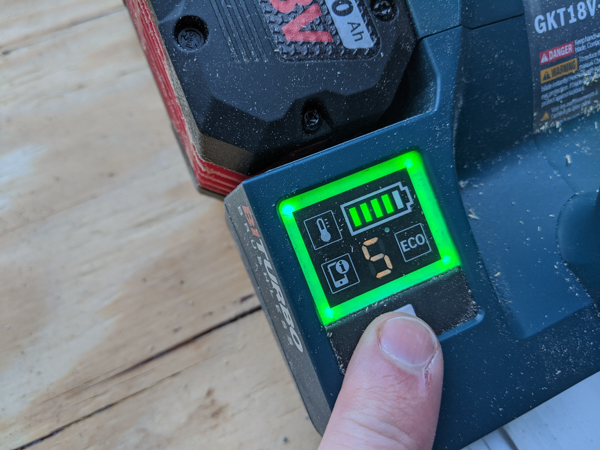 With more and more Bosch tools cutting the cord, the batteries are at the center of this movement. At the show we saw the all new Core 12 ah battery. This is the biggest battery that Bosch makes and includes fifteen 21700 li-ion cells. 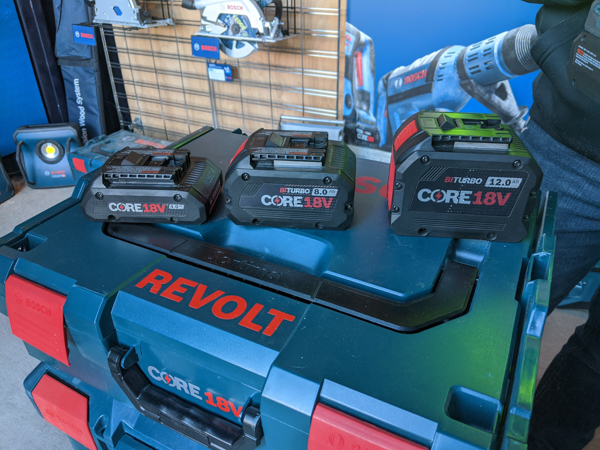 While large batteries like this help to power large draw tools like rotary hammers and circular saws, they also can take quite a long time to charge. Bosch is combating this issue by releasing in the US market the Hell-ion charger. The Hell-ion, model GAL18V-160C, is a 16 amp, air-cooled fast charger. At 16 amps, this charger can charge the new 12.0 battery in 55 minutes. That’s fast. The charger has a power boost mode which means that it can partial charge a battery at a faster rate. This mode can charge a 4.0 battery to 50% in 9 minutes and an 8.0 battery to 50% in 15 minutes. That’s smoking fast.

One of the best surprises at the Bosch Tools booth was the 18V FlexiClick 5-in-1 Drill/Driver System. The 12V has been out for a few years and has proved to be a very valuable tool for drilling and driving in hard to reach places. Now that same functionality is available in the Bosch 18 volt platform. TheBosch GSR18V-535FCB15 is a compact brushless drill body that weighs in at only 2.1 lbs without the battery. Despite it’s small size it still has plenty of power with 535 in/lb of torque. The kit comes the drill body, a 4 ah core battery, a charger, a bag, a right angle, offset, and straight chucks. 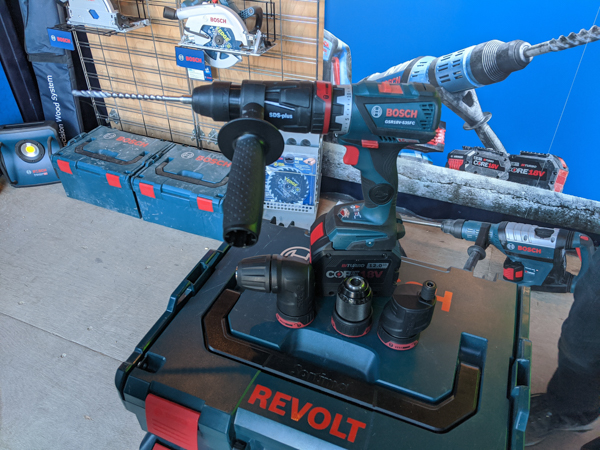 At first glance the new 18V looks very similar to the 12V but the 18V has an ace up its sleeve. To quote the late Billy Mays, “But wait there’s more!” The new 18V has an optional SDS-plus attachment that’s sold separately that allows the FlexiClick to be used as a small rotary hammer. The attachment is model number GFA18-H and will be available shortly for $99.

The new FlexiClick is available now though from Acme Tools for $299 kitted and that includes the drill body, case, charger, 4.0 core battery, right angle, offset, and straight chucks. 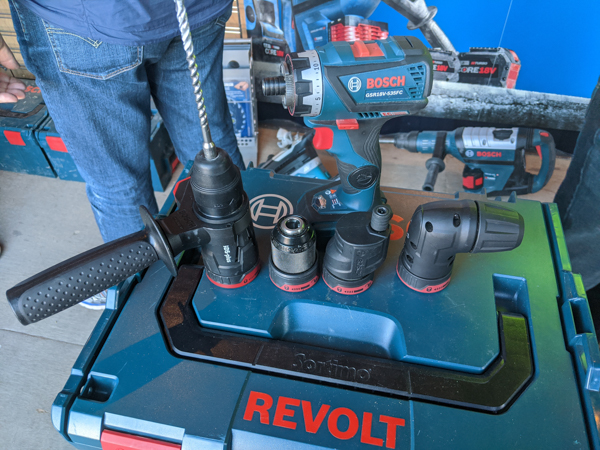 That’s all from the Bosch Tools booth this year. So what are you most looking forward from Bosch this year? Let us know in the comments! 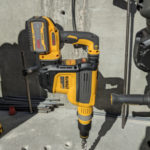