Weight: 1.24 pounds
As a carpenter I build straight, square, and plumb, even when faced with the many challenges of remodeling I need to get the job done right. For example, at the initial stages of a remodel you may have to do a lot of structural modifications which often include detail framing.

The simple beauty and accuracy of a plumb bob is a great way to detail frame, which often requires a stick framing method. The downside is a plumb bob is a pain to use solo and often takes too much time to setup and use repeatedly. The folks at Milwaukee Tools have a better option than your classic plumb bob and dry line. The M12 Cordless Lithium Ion 2-Beam Plumb Laser Kit provides carpenters like me a fast, simple, and always heavy duty way to ensure my framing is dead on plumb. Let’s check it out! Out of the Box

The Milwaukee M12 Cordless 2 Beam Plumb Laser kit is packaged neatly in a heavy duty plastic carrying case with formed spaces for the tool, the charger, and the battery, which is recommended to be stored separated from the tool to prevent ghost drain.

The tool itself is very simple with just ONE button, a rugged body with rubber over-mold, and two windows for the beam to shoot up and down. The tool is a bit bigger than I expected, but by no means is this a large laser, only slightly larger than a 30-foot taper measure. The first thing I noticed was that you could hear and feel the level mechanism moving back and forth as you hold the laser in your hand. There is no locking mechanism to help protect the sensitive components within the laser, so storing the tool in the case is definitely recommended.

The Milwaukee M12 Cordless 2 Beam Plumb Laser is extremely handy on the job-site, there are countless applications where finding plumb quickly and accurately is needed. In a recent kitchen remodel we had to do some detail framing, creating a new window unit, adding some walls, and even jacking up some old sagging beams in a circa 1800s home.

Using the Milwaukee M12 Cordless 2 Beam Plumb Laser was super easy. Just turn it on, place it down, and mark your beam up and down. DONE! The tool offsets under the down beam so you can see and mark the laser spot as needed. The tool also features magnets for metal framers. With each adjustment you have to wait a few seconds for the beam to settle and if your are working on out of level floors, like the hastily poured concrete “slab” in our recent kitchen job’s basement, the laser blinks to indicate it needs to be adjusted to accurately beam plumb.

The The M12 Cordless Lithium Ion 2-Beam Plumb Laser Kit is a great addition to any carpenters tool box. The tool is easy to use, lightning fast, and beats using a bubble level to find plumb any day.

The Milwaukee M12 line features an impressive collection of extremely useful tools that make your work better and faster, not to mention the industry standard for heated gear, so if you don’t have M12 tools yet this is a great place to start. You’ll find yourself reaching for this Milwaukee M12 Cordless 2 Beam Plumb Laser regularly, we sure did! Milwaukee doesn’t have much to offer in the laser measuring and layout tool category, clearly not a focus area for the company, but the Milwaukee M12 Cordless 2 Beam Plumb Laser surely makes a buzz on the job-site. 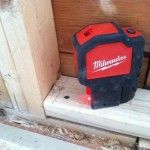 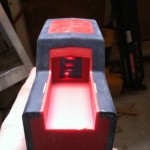 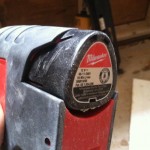 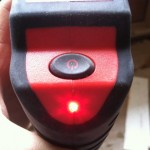 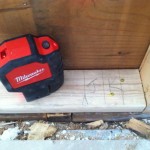 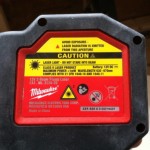 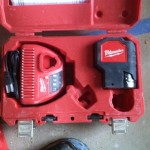 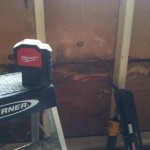 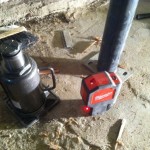 Phil is a 28-year old Air Force Veteran who decided to transform his passion for construction and home improvement into a career. Inspired by his Grandfather who built his home from the ground up with his bare hands in Portugal, he received his formal training in Carpentry at the North Bennett Street School in Boston, MA. Phil continues to grow his skills as a lead carpenter, managing job sites in and around Boston, and a Captain in the Air National Guard bettering himself as a leader. He loves exploring new building products and construction methods to solve job-site problems and reviewing tools for the pro-contractor and serious DIYer.

All posts by Philip »