Weight: 2.25 lbs.
Tool Box Buzz recently tested out the Milwaukee M12 Laser Level, Model 3624 Kit. This laser is a green cross-line 4-point level designed for Milwaukee’s target audience of Jobsite Professionals. This Laser Level comes as a bare tool (3624-20) or as a kit (3624-21). We tested out the kit which included the laser, a single 3Ah M12 battery, Combo M12/M18 rapid battery charger, and a laser alignment jig. It all came in a rugged hard case with a molded foam insert. We put it to work adding some conduit to the Rusty Boards Handcrafted Furniture workshop. We also tested it out under a variety of lighting and mounting conditions and positions. So let’s get into the details! 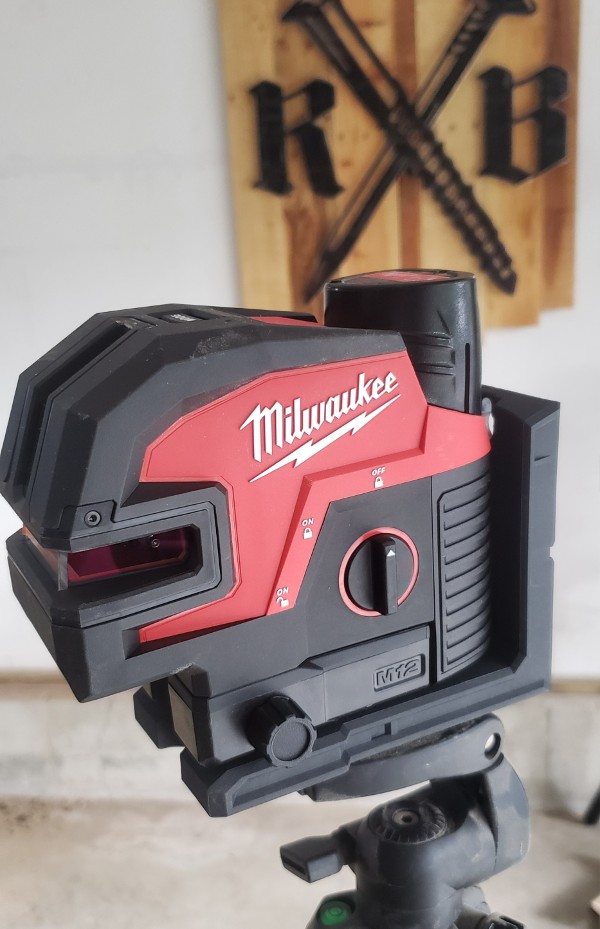 The Milwaukee M12 Laser Level, Model 3624, matched every expectation we had. It uses bright green diodes to produce an easily visible straight line or line + plumb dot, even in bright sunlight. It’s easy to switch between modes with the rubber over-molded “mode” button. It features 3 modes which are:

One of the potential features Milwaukee could include in future versions of this level would be a fourth mode with just the points on. This would allow the operator to use the level as a plumb without potentially flashing unnecessary laser light. It would make the plumb dot even easier to see (although it’s still pretty easy as shown in the pic below) and would also likely increase the battery life by a decent amount. 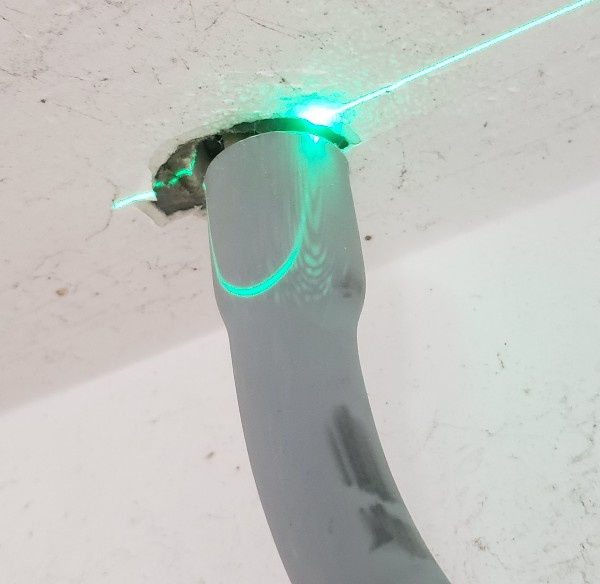 Whether in vertical or horizontal mode (or combo as pictured below), alignment was very easy. When using as a level, the pendulum should be unlocked. In 4 seconds or less the unit will self-adjust. As with all vertical (plumb) lines the pendulum is gravity functioning and the horizontal line is mirror-based to be pedicular to the vertical orientation. 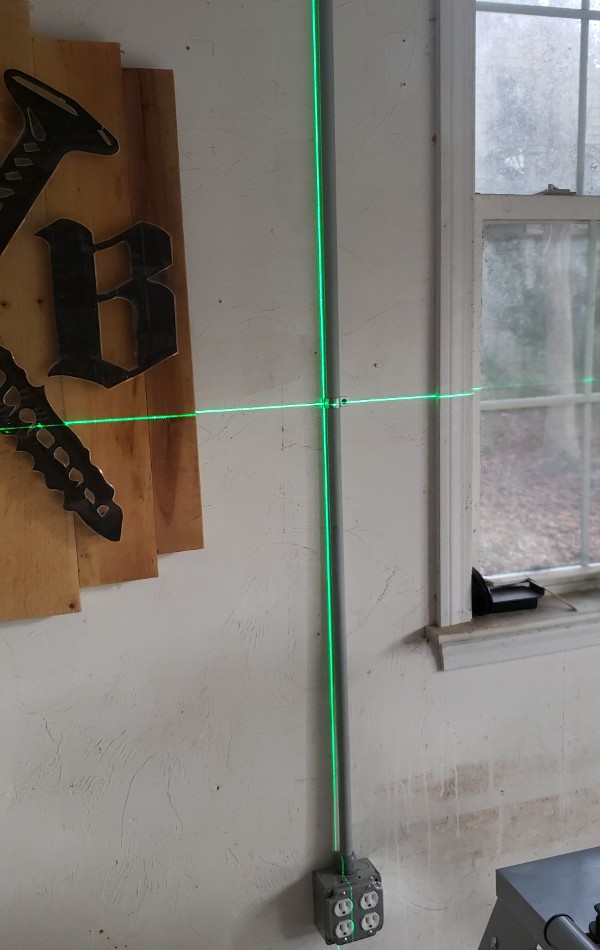 But what if you want to use the Milwaukee M12 Laser Level, Model 3624, as a straight line instead? As with all pendulum-based laser levels, you need to lock the pendulum into place to prevent unintentional jarring, mis-calibrating, or damage. The Laser has separate on switch settings to eliminate the pendulum locking as a separate (and potentially risky) step. 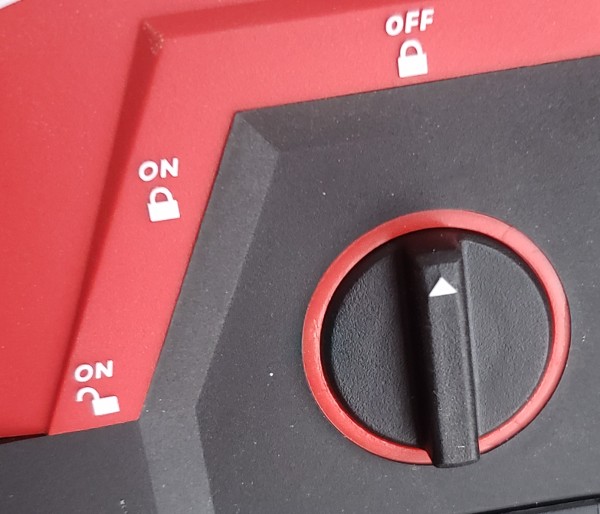 And once locked into place, the level can be easily tilted and used as a straight line for any angled installs (like stair stringers or hand railings) you may need it for. We used it to make some adjustments when reinstalling a handrail in a Cape Cod detached garage attic. 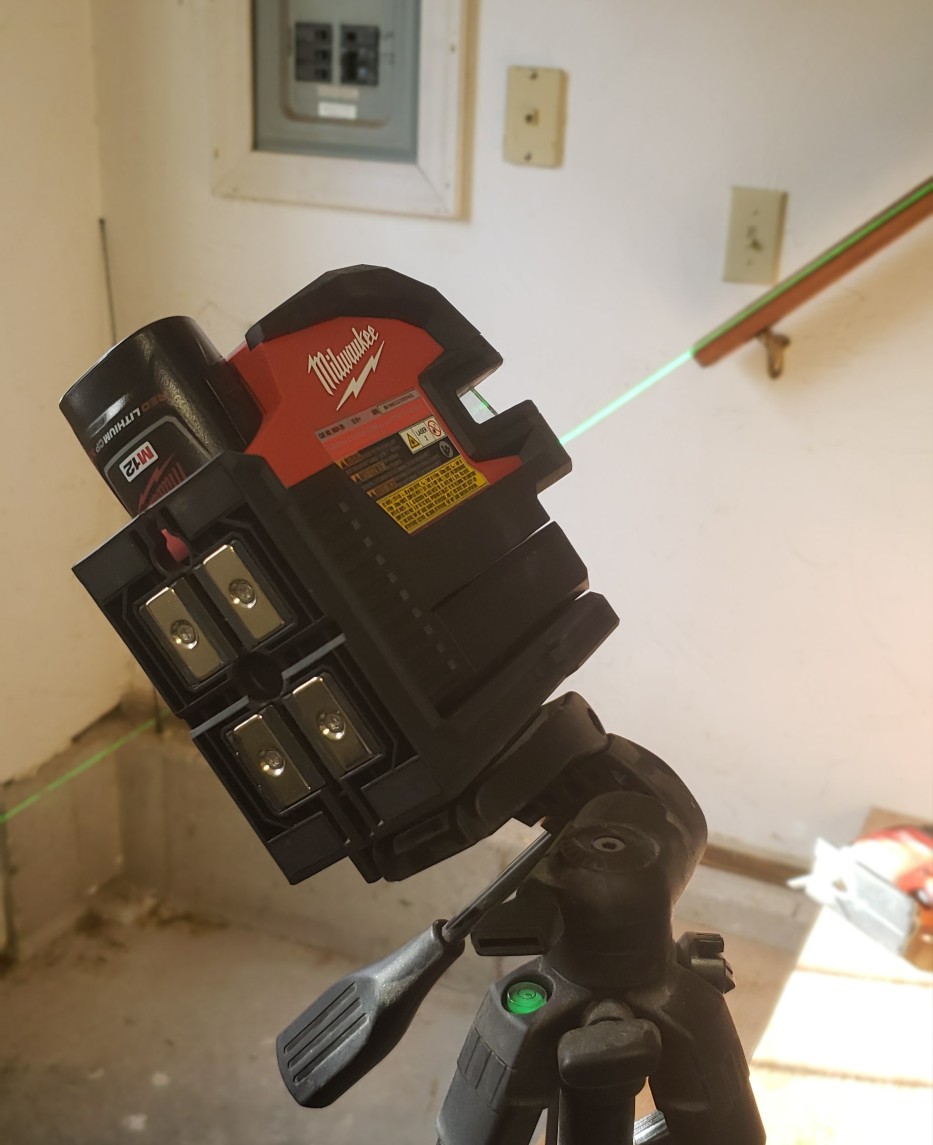 The included hard case with molded foam insert is Milwaukee standard. And that’s extra important with a precision laser because, as previously mentioned, you don’t want to jostle any precision equipment with fragile parts. It’s nice that Milwaukee included space for the charger, battery, and alignment plate as well. 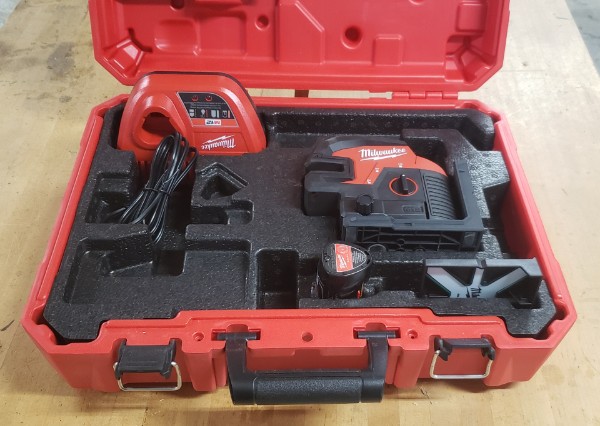 There is additional space for pieces that don’t some with the kit too. Milwaukee should add a picture outlining options for this additional accessory expansion in the documentation slot molded in the top cover of the case. 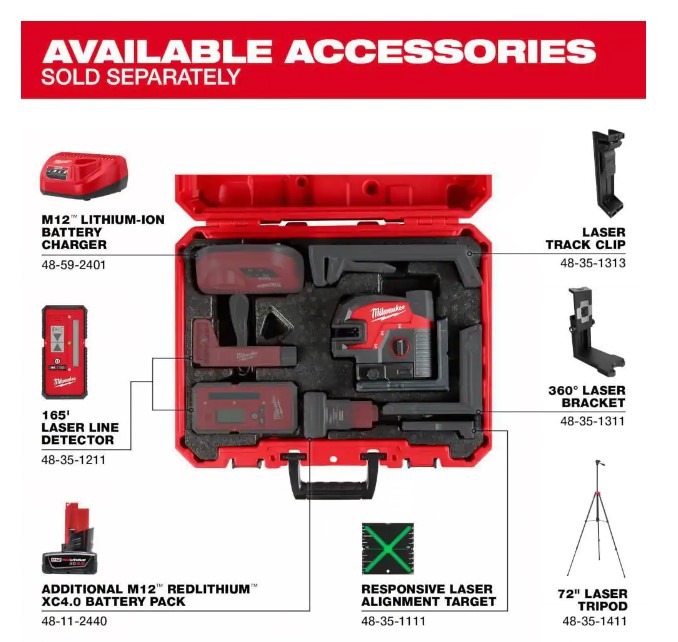 There are 2 key features to point out when it comes to getting the laser where you need it to be. The first is the pivot-on-point micro adjustment knob. It’s located at the front left corner of the tool in easy reach. It allows you the swivel the laser left or right on the integrated base versus having to make the adjustments to your tripod. There is no fine adjustment option for the horizontal line however. The adjustment knob worked as advertised and felt snug with zero play or wiggle which is always appreciated. 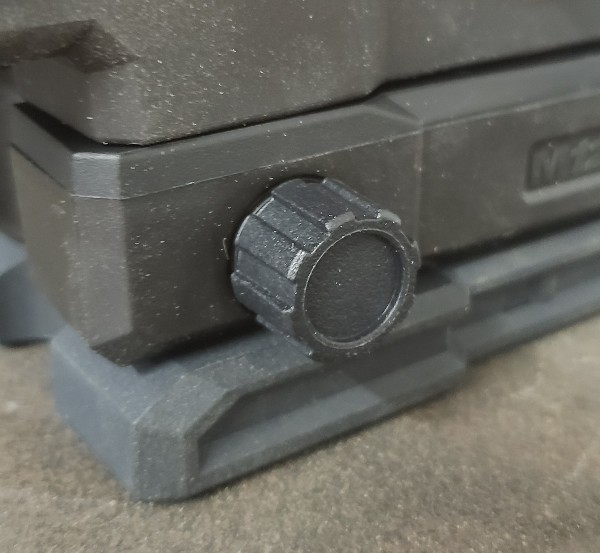 The Milwaukee M12 Laser Level, Model 3624 also features the 2 most common mounting thread sizes – 1/4 – 20 & 5/8-11. We put the laser on a standard telescoping tripod with 1/4 – 20 attachment hardware dozens of times with no issues. It was centrally located on the base and felt well balanced and extremely secure once attached. 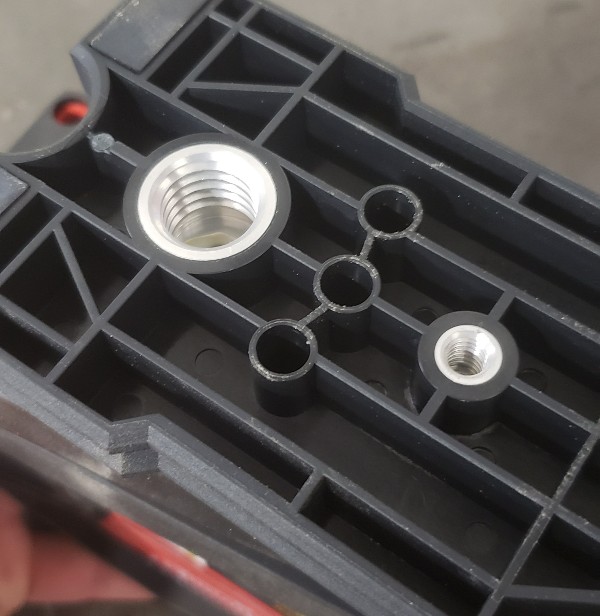 There are 2 other methods of mounting this laser and both are featured on the back plate; rare earth magnets and a hardware hanging slot. The magnets are extremely strong. We had no issues with beam creep once the laser was secured to a metal stud or Unistrut. We are able to use the micro adjustment knob with no issues while magnet-secured too. That’s an issue that has cropped up with some other laser levels/lines! 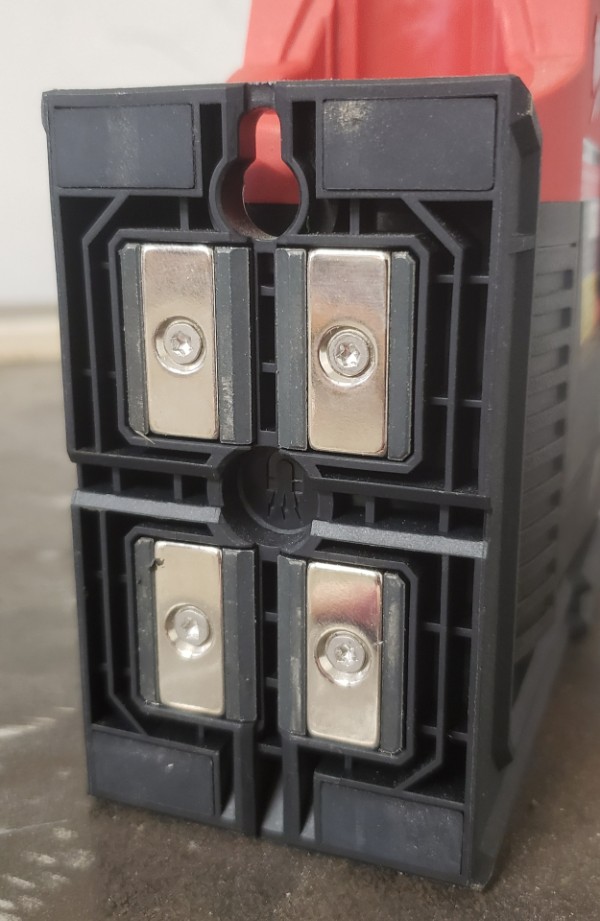 The IP Code or International Protection Rating consists of the letters IP followed by two digits. It classifies the degrees of protection provided against the intrusion of solid objects, dust, accidental contact, and water in electrical enclosures.

The standard was designed to provide users with more detail on the product’s durability in the elements.

The larger the value of each digit, the greater the protection. For example a rating of IP54 means: 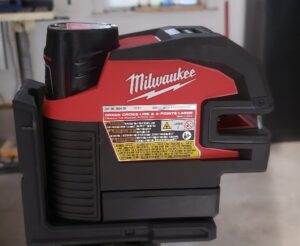 This laser is listed as a Class 2 laser. Lasers are classified for safety purposes based on their potential for causing injury to humans’ eyes and skin.

Class 2 lasers’ output power is below 1 milliwatt and emit visible light only. Lasers in this rating normally would not harm an eye unless a person deliberately stared into the beam. Laser protective eye-wear is normally not necessary and it is not a skin or materials burn hazard, which is a plus on a job site with a lot of flammable combustibles around.

The Milwaukee M12 Laser Level kit, Model 3624-21, is an impressive kit to say the least. It’s a well-designed, high-performance green cross line 4-point level that builds on Milwaukee’s already impressive M12 lineup. At $549 this is not an inexpensive investment but it’s also not cheap quality. You get what you pay for. And if you’re a PRO builder who needs a full-feature laser level then this may be a very wise investment. If the price is a bit high and you don’t need 4 points… or an M12-powered laser but still want a high-end Milwaukee laser you should check out some of the previously released models here. But if you want the most current M12 laser and or need 4 points and cross lines then look no further!