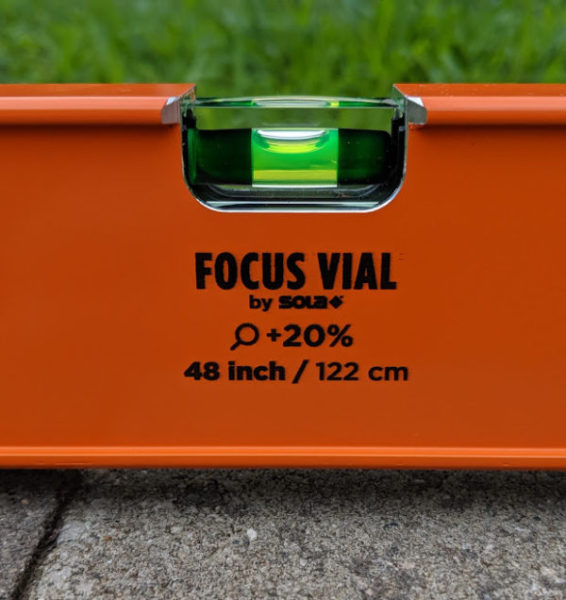 A high quality, rugged, and accurate spirit level is one of the most indispensable tools on most job sites. But these precision instruments also get the snot beat out of them. As a sitework contractor, it is common to see levels tossed in and out of toolboxes or truck beds. In order to be tradesman-proof, your box beam level better be tough! Keson is a company that gets this. This is my review of the Keson 48″ Box Beam Level Model LKB48. The rugged yet refined design and precision accuracy are very impressive!

Keson Industries is a company that has been building high quality layout and line marking tools since 1968. They partnered with the European manufacturer SOLA to provide them with high quality components to build their levels. These construction levels are feature packed, durable, and affordable. Their lineup also includes digital levels, screed levels, and torpedo specialty levels. Keson’s construction level series is a mid-tier offering that is rugged and a great value. 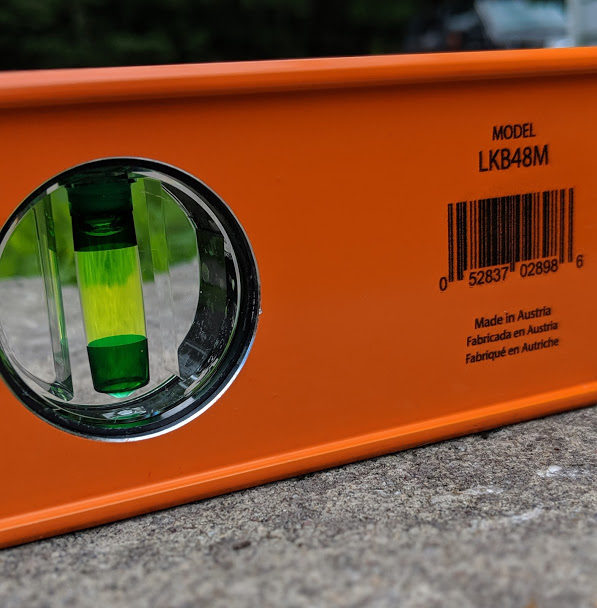 The crew here at Tool Box Buzz took a look at some of the top offerings for Best Construction Levels Head to Head a couple years ago. The criteria the crew used to evaluate those levels, reads like the features list of the Keson. The body of the level has a solid box beam style construction that is heavy and rugged. The end caps are constructed from a sturdy rubber material that holds up well working around concrete structures. The rubber overmold is also included on the hand hold cutouts.

The under side of the Keson Construction level features magnets machined into the bottom rail of the beam. I found this to be great feature for storage, for instance securing the level inside of tool box body on a truck. If you work with steel often, then this is an excellent feature for you. 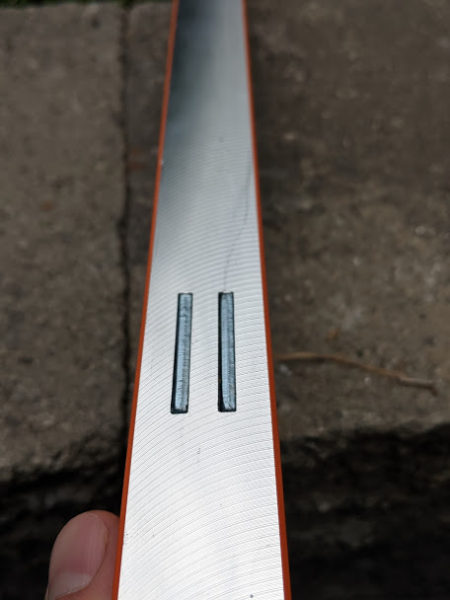 The vials of the Keson Construction Levels are probably my favorite feature. Three vials are built into the 48″ Box Beam Level. The housing offers a 20% magnification value and is incredibly easy to see and read in all conditions. The fluid in the vials is specifically designed to be anti-static, anti-shock, and extreme temperature resistant. 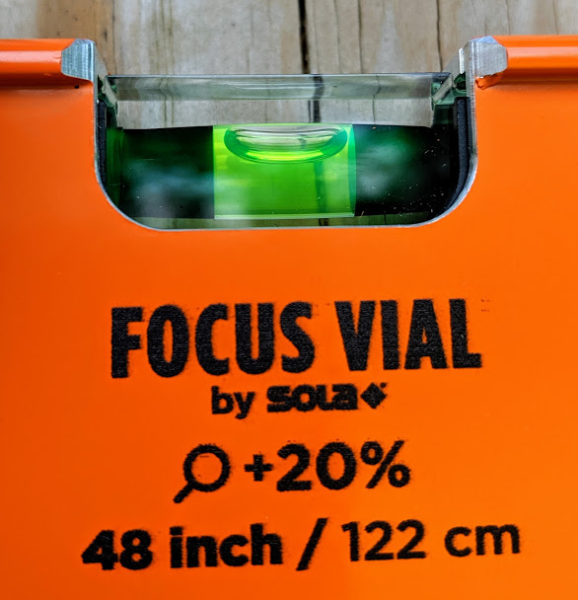 Keson’s vials are so clear and precise that they make quick leveling a breeze. Because of this attention to detail, the bubble in the Keson vials returns to shape quickly if you drop or bang the level. If that isn’t cool enough, Keson made the vials of the construction level series glow in the dark! 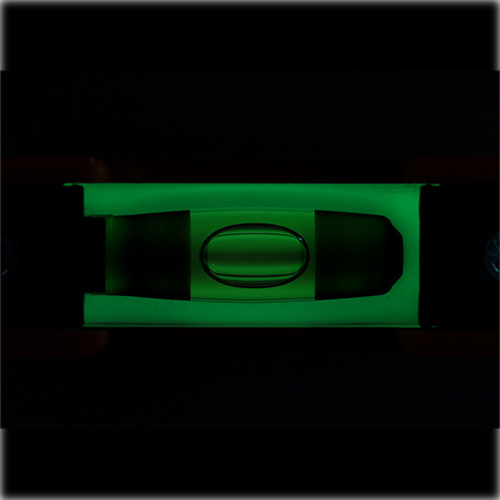 A stock image of the Keson glow in the dark vials from the manufacturer’s website.

Well all this talk is not worth a darn if it isn’t accurate. Keson’s vials are rated for a maximum measurement tolerance of 0.0005 in./in. in the standard position. In the vertical position Keson rates the Construction Box Beam Level for 0.00075 in./in. 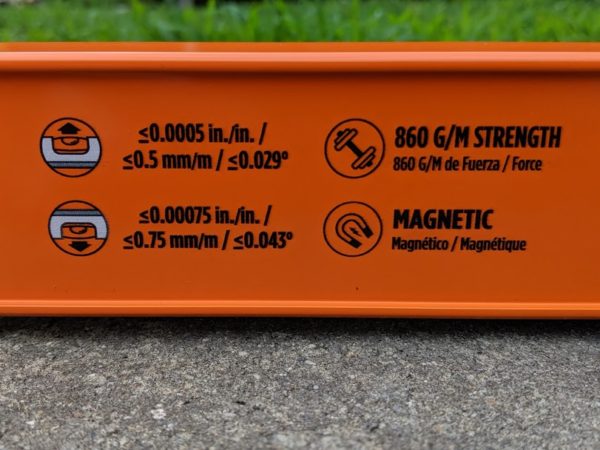 It has to be able to withstand a fall right? Well to test this I threw it off a deck a I was working on a few times. This impromptu drop testing subject the Keson level to an approximately 14′ drop. I repeated the test four times and observed no damage to the level. I checked accuracy on an existing post prior to the test, as well as afterwards. The Keson Construction Level held true! 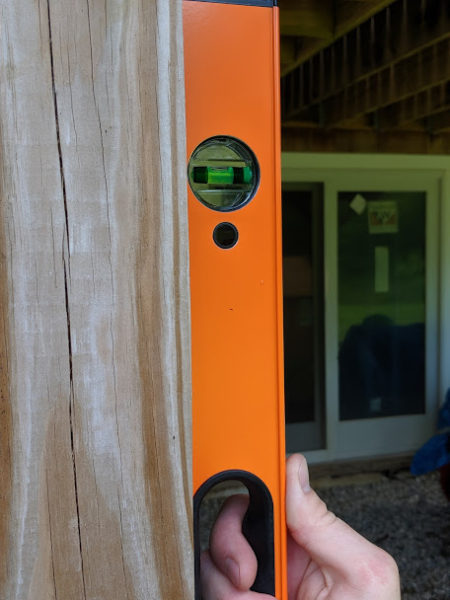 The Keson Box Beam Construction level series is currently available along with all other styles in the series. Currently the 48″ model that I reviewed is available for $78.99 from our friends at Acme Tools. That is a great price for a rugged mid-range level with great features!

Who Did Keson Build This for?

The construction series of levels is what Keson describes as their Mid-Tier offering. This tool is perfect for the framing contractor, site work contractor, or anyone in the construction industry that demands a high performance and accurate tool at an affordable price.

Keson is manufacturing high quality and reliable levels with their family of box beam levels. The 48″ construction level I am using continues to impress me. It had solid construction, clear and precise vials, and is very affordable! The only critique is that no protective case or sleeve is included with the level. Keson could help end users prolong the external wear of the tool by including a case or bag with it.

The foundation of the construction industry is accurate and precise work done by skilled workers. Keson is offering tools to workers of any trade that will make your work more accurate, while giving a better finished product, and not breaking the bank while doing it. Check out the box beam construction levels from Keson and you will not be left out of whack!