A tape measure, also called measuring tape, are among the most common measuring tools used today. We took a look at the Dewalt XP tape measure – the XP stands for Extra Performance

History of the Tape Measure

The first record of a people using a measuring device was by the Romans using marked strips of leather. In 1868, a patent was filed by one Alvin Fellows of New Haven, Connecticut. Fellows’ ruler, was crude and flimsy, but was the first US attempt to make a spring tape measure. In 1922, Hiram Farrand with the help of The Brown Company in Berlin, New Hampshire improved on this design and began mass-producing the Ferrand Rapid Rule tape measure. Later they sold this design to Stanley Works.

Generally speaking, the term “tape measure” refers to a roll-up, self-retracting tape measure designed for carpentry and construction. The actual tape potion of the measure, called the ‘ribbon,’ is usually constructed from a stiff metallic material that can stiffen when needed but can also roll up for simple use and storage. The DEWALT XP Tape Measure utilizes two retracting springs protected by an impact-resistant, in an impact-resistant ABS case and Dewalt says it will survive a 60’ drop. You can actually feel the tension on these springs as the tape is extended and the retraction is fast and smooth. The spring on this tape is STRONG.

The built-in lanyard slot allows tethering and a redesigned screw-less belt clip holds tight and is easy to use.  his belt clip seems to be pressed in place with tension clips – I’ve dropped the tape several times and have not been able to dislodge it.

We dropped the tape several times from a 30-foot drop. As a result of these numerous drops the only damage was to the label and the belt clip. The belt clip was not usable afterward, du to the top bend being crushed inward. We tested the tape for accuracy before and after the drop set – there was no change.

XP Tape Measure features 9″ of heavy-duty thermoplastic coating at the end of the blade to provide 3X more blade protection and reduce blade breakage near the hook. This coating protects the first 9” of measurements – which are often the first to fade and wear out on tape measures.

Dewalt says that the high-carbon steel blade provides 13′ of standout. We tested this numerous times and got just over 11’ of standout. We achieve 13-feet only when we used our support hand to extend and hold the tape at the 1-foot mark. Hook breakage is among the leading causes of tape measure failure. The DEWALT XP Tape Measure features a 3-rivet connection that extends 1-1/4” back into the blade. The hook moves slightly left/right/up/down in the case which will allow the case to take impacts from falls and not impact the hook.

We found that the extra-large end hook the perfect size, not too big, for grabbing construction material from all four sides making grabbing objects while taking solo measurements easy.

The Dewalt XP tape measure shows inches, feet and 16-inch on centers in red. I like the rubber over mold but the tape is a little thick in my hands – this will differ from user to user.

This tape is well-designed and durable. The belt hook is a major improvement and the extension and retraction mechanism and action is awesome. I like using this tape, its smooth and fast. 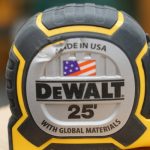 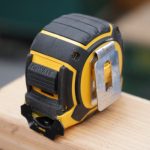 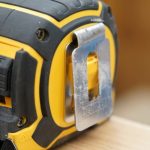 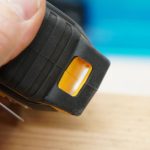 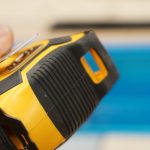 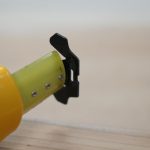 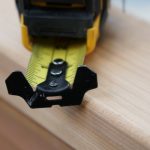 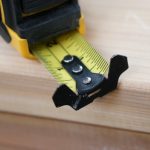 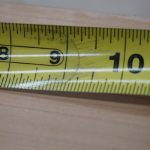