Weight: 1 lb. 4 oz.
Recently I had to bust out my Ridgid Plastic Pipe Cutter (Model RC-2375) and thought it was worth a review. As “toolbelt-on” contractors, my colleagues and I often toss around the term “game changer” when referring to what we consider a revolutionary tool.  The Ridgid RC-2375 plastic pipe cutter is exactly that – a game changer, and in fact – one of my favorite tools. 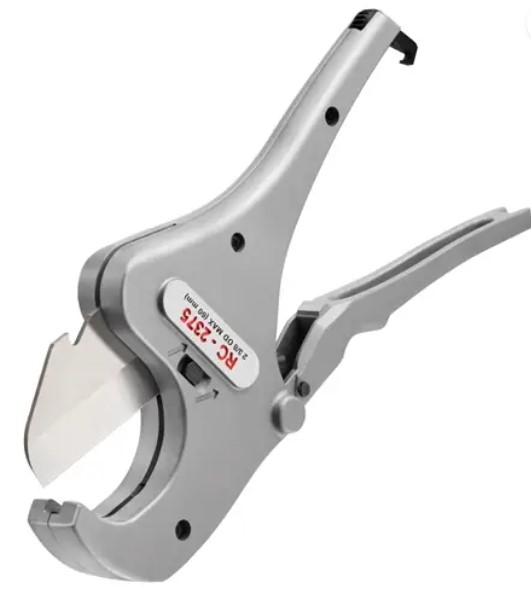 This Ridgid Plastic Pipe Cutter (Model 2375) is a simple and lightweight aluminum hand tool. A game-changing tool that has no motor, no batteries, and no cord?  That’s right.  The user of this tool can manually cut plastic pipe with an outside diameter of up to 2 3/8”.  The body of the tool is cast aluminum and has a “C”-shaped throat that the plastic pipe nests into.  As the user advances and indexes the handle, the steel blade swings across the pipe and towards the throat, cutting through the pipe. The result?  A clean, easy cut that is immediately suitable for piping.  No rough edges, no burrs.  It takes 15 strokes to advance the blade from fully open to fully closed.  Pulling the handle open releases the fully-closed blade. Then it’s opens 90 degrees and ready for the next cut. 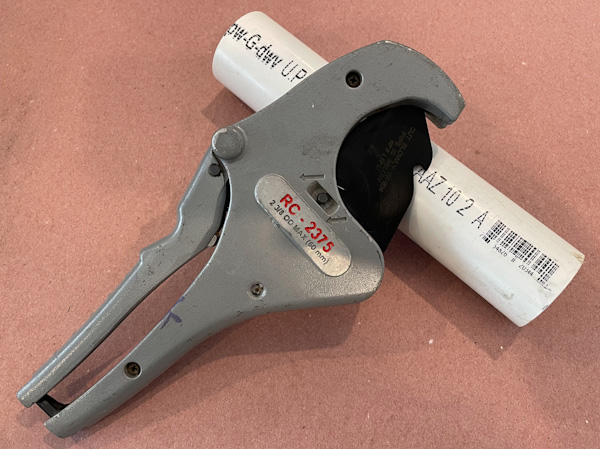 The Ridgid RC-2375 is capable of cutting PVC, CPVC, PEX, polyethylene, polybutylene, and rubber hose.  The amount of hand force needed to cut through material is minimal.  I have never needed two hands to cut anything with it- even 2” Schedule-40 PVC.  Ridgid advertises the following:

When I think about cutting plastic pipe (particularly PVC) bathroom and kitchen remodels are the first jobs that come to mind.  Historically, when cutting PVC pipe for installation, I set up a miter saw on a proper workstation.  Even a general-purpose blade ensures the cleanest, most-square cuts- particularly on larger PVC pipes such as 3” and 4”. However, not all jobs require larger pipe diameters, nor do they require a chop station.  Some jobs are smaller- such as swapping out a sump pump or reconfiguring a condensate drain.  The RC-2375 is great for these smaller tasks.

PVC pipe removals and cut-ins are where the tool really shines.  While using a reciprocating saw or oscillating multitool to remove older plastic pipes may be a common practice, the action of a power tool can sometimes vibrate the pipe that you are trying to cut- thereby minimizing the cutting action of the tool.  Placing a second hand on the pipe to be removed isn’t always possible or safe.  The Ridgid RC-2375 is a true one-handed tool, and the gentle ratcheting action makes removals a breeze. 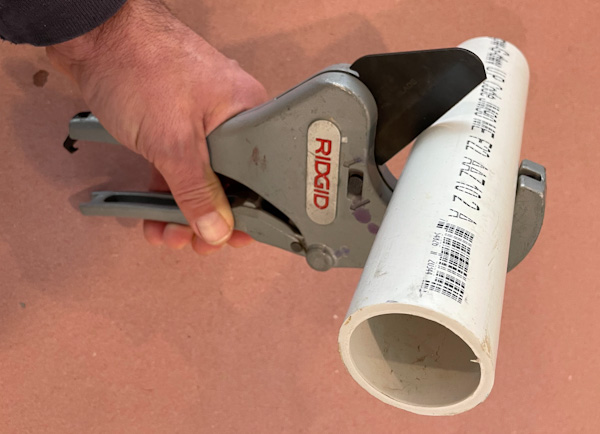 And due to its size and configuration, the tool is easy to throw in one of the pouches on my toolbelt.  That’s just not possible with an equivalent battery-operated tool.  Several times I have brought the Ridgid pipe cutter into attics or crawlspaces, right in the back pocket of my Carhartts.  The tool also has no set-up required, no batteries to charge, and no cord to manage.

The clasp at the tail of the handle to keep the tool “closed” has never come unlatched or slipped open.  Similarly, the slide pin that keeps the blade retained has never loosened or fallen out.  The tool remains durable after 4 years of use.

The Ridgid RC-2375 is a great tool, but it does have a few drawbacks.  First, it doesn’t cut PVC pipe very well in colder temperatures.  While this isn’t a deal-breaker if you’re considering purchasing this tool, it is something to be aware of when working with cold PVC.  To Ridgid’s credit, there is a disclaimer directly on the blade of the tool that reads “Cut slowly when pipe is below 50 degrees F.  (10 C.)”  Cutting cold PVC can result in jagged cuts because the pipe wants to shatter, rather than shear.  Essentially, the pipe breaks before it’s fully cut.

Second, the RC-2375 is also not great on all materials, including foam core PVC. To Ridgid’s credit, polypropylene is not a material they advertise can be cut with the RC-2375. Being a curious guy, I tried anyways and sadly it doesn’t work well.  The polypropylene pipe (such as a plastic p-trap) compresses, rather than cuts. 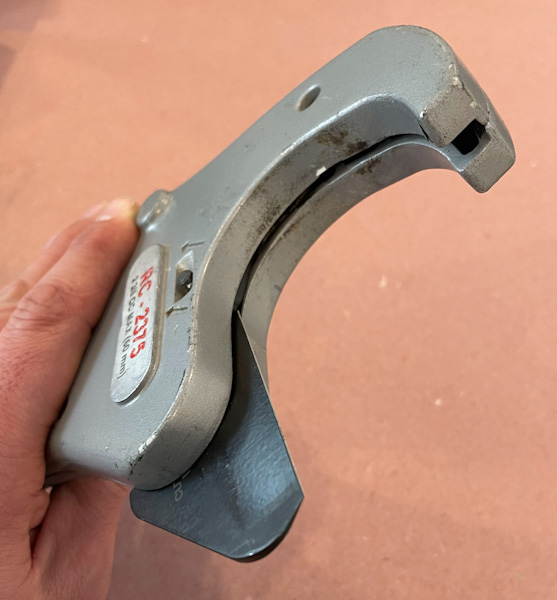 Lastly, I don’t cut PEX or polyethylene tubing with the Ridgid pipe cutter because I find the ratcheting action to be too slow.  I prefer to cut those types of tubing with a single-throw tubing cutter, which is much faster and more productive.

I bought the RC-2375 from the plumbing supply house F.W. Webb in 2017 and paid $115.  After about 3 years of periodic use, I replaced the blade for a cost of $85.  A professional plumber might expect to replace the blade more frequently. The tool is completely serviceable, as replacement parts are available online.  It can be repaired in the field or in the shop- something that is generally prohibitive with a power tool.  I have used similar generic “price-point” tools from the box stores, and they simply don’t compare to the quality of this Ridgid unit. The blades don’t hold up as well, plus they aren’t always replaceable or serviceable.

Something can be said for modest, well—made tools with no bells and whistles.  The Ridgid RC-2375 is simple, reliable, and portable, and has one purpose: To cut plastic pipe.  ….and it does that job well. It’s a relatively low-cost investment for a tool that is built to last.

Kassel Construction was formed in 2005 in Jeremy’s hometown of Syracuse, NY, and has been a vibrant business since. Jeremy moved to the Albany, New York area in 2010, and quickly gained traction as a Capital District contractor. Although he loves new construction, Jeremy’s primary work is residential remodeling, with a customer-centric approach to job site management and problem-solving. He excels at building relationships with vendors, suppliers, and fellow tradespeople. Jeremy also enjoys writing for the Journal of Light Construction and Fine Homebuilding as well as teaching and presenting at JLC Live. He resides outside Albany, New York with his wife and 2 daughters.

All posts by Jeremy »