Dewalt has been releasing some exciting new tools lately. One particular area that we’ve seen a lot of innovation in is their Perform and Protect feature. Depending on the tool, this feature is designed to protect the user against dust inhalation, loss of control, and vibration.  The new Dewalt DWHT75900 carbon fiber hammer tacker is a tool that fits with its reduced user vibration. Most of the staple tackers I’ve used are heavy at the striking end. The DWHT75900, while larger than my current model, was lighter and so much easier to swing. We first tested the DWHT75900 in the shop in both flat [workbench] and overhead [vertical] stapling applications. In the end, we installed approximately 200 staples, and found that it drove fasteners consistently flush, no jambs.

Like any tacker, angled strikes with this tacker will give you angled installed fasteners and mixed results. Later, we took this to a jobsite project to install some housewrap – it worked flawless, no jambs.

Loading the Dewalt DWHT75900 Carbon Fiber Hammer Tacker is easy. There is a release at the end of the handle that pinches and opens the staple carriage. The staples easily drop into the open slot. I liked that the carriage release mechanism is recessed at the bottom of the handle, protecting it from damage from bumps and drops.

Dewalt says the stapler features an “Auto-lock, AntiJam™ Pinch Latch.” I’m still not sure what this is, and assume it’s an internal anti-jam mechanism and fancy marketing term.

The back side of the tools head has a flat metal surface that I found worked great at sinking fasteners that did not drive in all the way. I’m not sure this is a feature that Dewalt purposely designed, but I found it way more convenient than pulling out my hammer. Besides the fact that this carbon fiber tacker is super lightweight, it is super comfortable to use.  The rubberized handle is detailed after their hammer grip. The end of the grip is flared, almost like a California hammer style, to keep your hand from sliding off during operation.

The light weight, rubberized grip all help to absorb and reduce user vibration. The DWHT75900 can handle the following staple sizes:

I just found my new hammer tacker. I’m all about lighter, safer, faster and easier. The Dewalt DWHT75900 Carbon Fiber Hammer Tacker fits that category and costs only $39.97. 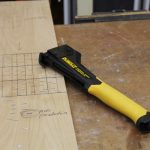 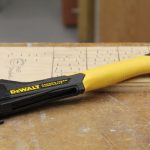 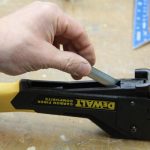 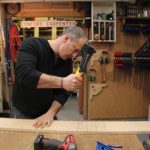 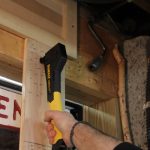 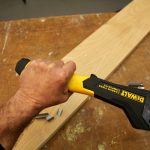 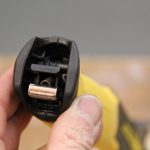 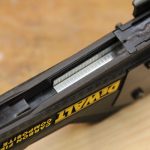 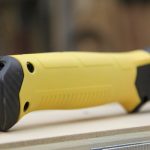 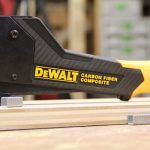 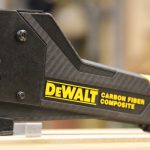 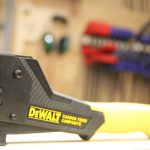