A solid, safe table saw is the cornerstone to any efficient job-site or worksite. Dewalt wants to close the gap on a cordless job site by introducing several cordless tools including a brand new table saw. We tested the Dewalt Flexvolt   8-1/4” table saw on our job site and in our shop and were impressed with its portability, versatility, performance and power. 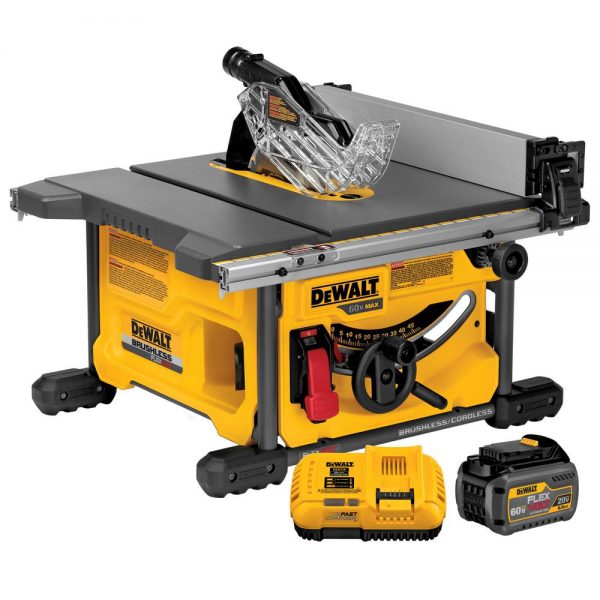 This new table saw has all the same features as their corded sibling. So if you’re already used to using a Dewalt table saw, there is NO learning curve.


The saw is powered off of a new 15 cell FlexVolt 60V/20V batteries DCB606 which cost approximately $150 each. The 60 volt batteries are backwards compatible meaning that you can use them in the new FlexVolt tools or in any 20 volt platform tools.

What’s in the Box 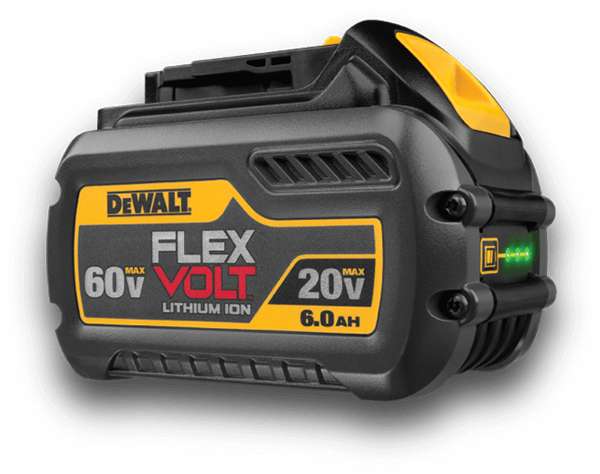 I’m a fan of all Dewalt table saws, but the best feature of this saw is obviously that it’s cordless.

At the Dewalt media event I inquired whether an accessory power cord was in the making, so users could plug into a power outlet for AC current.  Having both options would be nice. The dual option would be handy on construction sites with no power.  On these sites contractors often compete with extension cords for a generator outlet.  Having a cordless option for these situations would be amazing, later on, when the house has power, you could plug in.

According to Dewalt, the cost for an AC adapter /cord similar to the miter saw accessory, would be substantial as the electrical current needs to be converted from 60v to 120V. Dewalt is currently working on a 60v to 120V adapter but it is still about 9 months or more away. [Jan 2017] 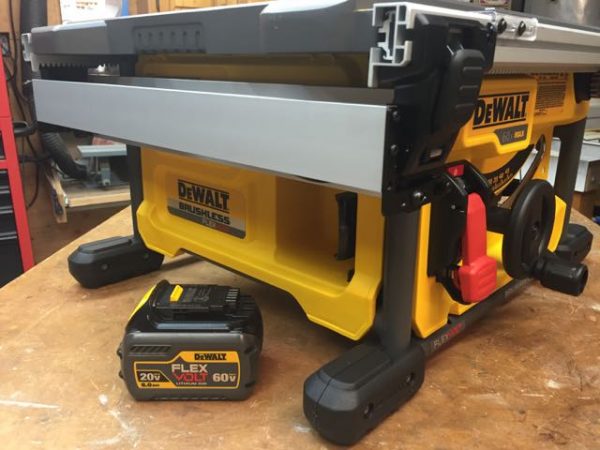 According to Dewalt you can rip 302 lineal feet of OSB plywood on one charge.  We did not test this, but we did throw a ton of lumber through it, as well as use this saw to size exterior trim on a sun-room addition and got two days out of one battery. We cut 2×4 KD lumber, plywood, PVC and cedar trim.

I think if this tools battery charge lasts till lunchtime, or a full day, its worth it.  If your serious about using a cordless table saw, I think a second battery is a must!

Update: We’ve been using this saw for 6 months now and it’s a great saw, nothing negative to report.

Like many higher end, Li-ion tools this saw is equipped with an “Electronic Protection System” that will protect the battery pack from overheating, overloading, or deep discharge. 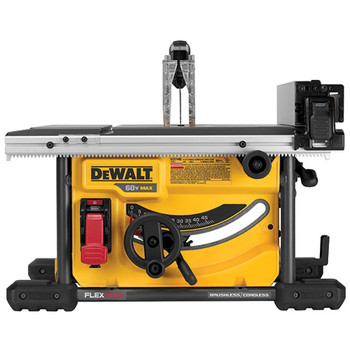 I’d be remiss if I didn’t speak to how amazing the Dewalt rack and pinion fence design is. In my opinion, the rack and pinion telescoping fence is the best saw fence on the compact table saw market. It allows me to make super smooth, micro adjustments, with no tapping on the fence with your knuckles or tape measure.

The rip fence can be mounted in two positions;

The fence extends wide enough to allow a 24-inch rip capacity on the right side of the blade, and will allow a 12-inch rip to the left of the blade.

The “Work Support / Narrow Ripping Fence” option is a nice addition and one that I have come to enjoy on Dewalt saws.  When used as a support feature it helps keep boards wider than the table top from dipping down when the fence is extended. When used as a narrow rip accessory it provides an extra 2-inches of clearance between the blade and the fence. This helps keep you hand further away from the spinning blade.

Dewalt includes their “Site-Pro Modular Guarding System,” which allows for the blade guard and riving knife to be installed tool free. The blade guard always seemed to be an afterthought for tool manufacturers.  This guard has had some thought put into it and I absolutely love having the riving knife as a safety feature.

The riving knife mirrors the saw blade and does a real nice job at keeping the saw kerf from closing behind the blade while ripping, it also helps prevent a bind between the blade and fence from getting caught by the saw teeth on the back of the blade.

The saw was almost perfect out of the box.  I find that all Dewalt table saws are easy to true up, and tune and these adjustments hold up well over time. 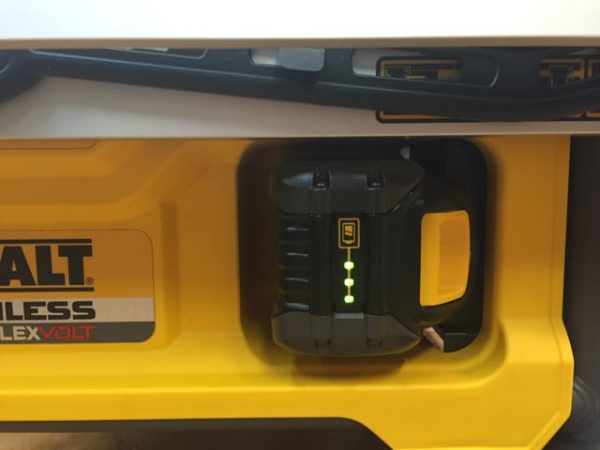 Prior to deploying the power loss reset feature there had been many job site horror stories of unattended table saws starting up upon power restoration.  Sometimes this restart caused material damage or personal injury.   This usually happened when the saw operator did not think to turn off the tool before walking away to go restore power. In the meantime, other people have leaned on, temporarily placed tools or even building materials on the saw, a blade spinning disaster waiting to happen.

If this cordless saw’s power is disconnected by disconnecting the battery, or a drained battery, the saw is designed to default to the OFF position

The Dewalt Cordless 8-1/4” Table Saw power switch is located on the front, lower left area of the saw and has a large red stop switch that can also be accessed easily with your knee. The power switch is electronic and the saw operator now has to push a green “on” button as opposed to pulling on the “red” power lever as was the case with older models.  The power switch also has a flip over safety cover that can be secured with a pad lock. The padlock hole diameter requires a ¼” maximum diameter padlock

The Dewalt Cordless 8-1/4” Table Saw is as durable as all of the previous sibling compact table saws, because it is basically the same saw with a cordless feature.

A metal roll cage protects the saw and has a convenient pivot handle for carrying.  The on board storage for guard, fence, wrenches and miter gauge is decent and secure. The saw table also has a special coating to reduce surface friction cutting.

One neat dust collection feature that goes unseen, unless you’re looking for it is the heavy duty black canvas shroud that is mounted to the underside of the table to the motor.  The canvas is sized to follow the motor as it is raised/lowered or beveled.  The shroud captures and directs dust toward the dust chute. Well done Dewalt!!

This saw will not accept a dado blade.

DEWALT table saws have always had the 2-1/2 dust port at the lower rear end of the tool.  This saw has a 1-1/2 – inch dust port off the top of the blade guard allowing dual dust collection capabilities.

The operator can now capture dust above the blade as well as lower in the blade housing, ensuring you are collecting dust effectively.

The only catch is you need a “Y Connection,” in order to rig this saw up to one vacuum.  Dewalt has told me that they have plans to offer a “Y Connection” as an accessory in the near future. 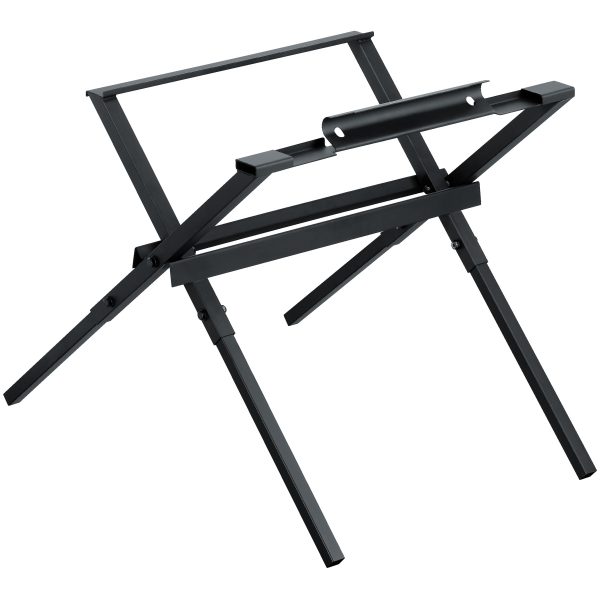 The recommended stand for Dewalt Cordless 8-1/4” Table Saw DW7485 is the DW7451 saw stand which will be available in mid/late Sept.

Dewalt made a rolling change to the DW7450 Type 2 unit to accept the cordless DCS7485.  If you’re going to purchase the Type 2 saw, make sure you have the correct stand since there is still type 1’s in stock. Frankly, it may make sense to wait.

The power switch is a bit finicky.  I noticed this at their media event and also when using the saw.  A quick press of the on button does not work and it seems that you have to press the button for a few seconds.  Additionally, you need to push this button straight on and not at an angle to work.  My guess is That Dewalt will work this out in time.

The price is to be expected for a cordless tool of this stature, but at the same time it will be a deterrent too.

Further testing showed that the red “Stop” lever was the cause, not the power switch.  After turning on the saw, the red stop lever would drop too hard onto the stop button and turn the saw off.   After conferring with the product manager at Dewalt, it was determined that the red stop lever spring force was too high.  The units we tested was from a “manufacturing sample lot.”  MSL’s are the first time the plant does a big run of the product and Dewalt then has time to refine and make adjustments, before the tool goes to production.

We are very impressed with the Dewalt Cordless 8-1/4” Table Saw and the attention to detail put into it.  This saw is a prime example of the hard work DeWalt put into making their tools, and their commitment to making a cordless job site.

This cordless table saw is a fantastic tool with some nice unique features, it is powerful and you can’t beat the fence system! 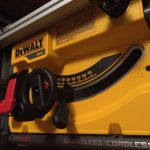 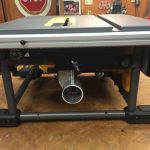 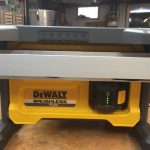 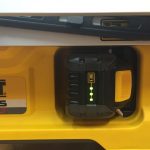 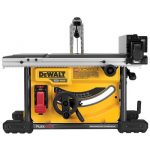 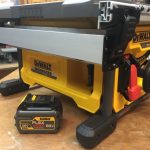 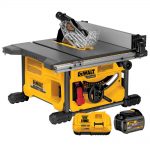 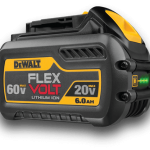