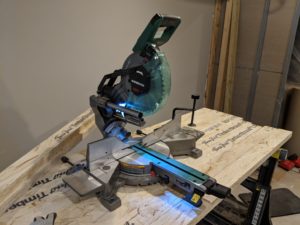 Tool manufacturers are pushing the limits of cordless tools further and further every day. Metabo HPT (formerly Hitachi Power Tools) is going big into their new dual voltage 36 volt cordless/corded platform. We’ve tested a couple of these tools including the 36V MultiVolt 1/2-in Hammer Drill. One standout addition is the C3610DRAM 36V MultiVolt Brushless 10″ Dual Bevel Sliding Miter Saw with AC/DC adapter. This saw uses brushless technology and 36 volt battery platform to deliver performance that rivals that of a corded saw and if you don’t want to be charging batteries you can plug it in using the AC adapter.

We took this tool to a residential remodeling project where we used it to cut the trim for a second floor addition/remodel. Three bedrooms, a walk-in closet, laundry room, bathroom, and hallway later, we’ve put this saw through its paces. Now let’s get to the review!

As any experienced carpenter knows, usually one of the very first things you do when you get a new saw is to throw away the stock blade. But I was pleasantly surprised by the cut quality I got with the stock blade. It wasn’t great, but it was fine for the paint grade trim work we were doing on this project. 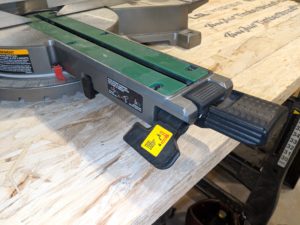 The controls are up front and easy to use. The bevel lock is located on the front of the tool for easy access. It works well. While cutting some trim stock that would butt into an inside corner, I put a 10-degree back bevel on the end of the board and the controls were very intuitive and easy to use. There is a zero degree stop pin that needs to be pulled out before you can bevel right, but that’s fairly standard, and beveling left is a breeze.

The miter lock has the release button and lock lever setup typical of many miter saws these days. The miter detent override is also up front on the left side of the saw table and it’s easy to access and use.

Switching between the battery and the AC adapter is easy, just like changing a battery. The adapter consists of a battery-shaped adapter a long length of cord, and a box that contains some additional electronics, and finally a shorter length of cord with the plug at the end. The overall length of the assembly and cord is very generous, around 25 ft. When plugged in there is a fan in the adapter that makes a high pitched whine. A little distracting but gets lost in jobsite noise pretty easily. The AC adapter works with no noticeable loss or increase in power vs. using the battery.

When using the battery the run time was really impressive. I would frequently go a full day of installing trim or flooring without needing to change the battery out for the AC adapter.

The Metabo HPT Multi-Volt miter saw is not noticeably different from a corded 10″ sliding compound miter saw when cutting trim. I gang cut some 1×5 stock for window casing in stacks of 4 boards and this saw didn’t hesitate in the least. We also laid 2-1/4″ white oak strip flooring for this job and there were a lot of acute angle cuts due to intersections between thresholds on angled doorways and the flooring. Once again we had no issues with power while cutting the oak flooring or thresholds. All in all we were very impressed with the power of this saw.

The left side fence arrived out of square to blade by about 1/32 over 2″ doesn’t sound like much but when you’re cutting casing that 1/32″ over 2″ quickly turns into 2-1/2″ over a 6′-8″ leg. With a few minutes a 5mm allen key and a good combination square I was able to square up the fence. I found  that one of the allen screws that needed to be loosened to adjust the fence are not accessible with a normal “L” shaped allen key and require either using the long leg of the allen key with a wrench on the short leg for leverage or a “T” allen wrench to loosen.

The Metabo HPT Multi-Volt miter saw has a lot of flex. Very little pressure can cause a lot of blade deflection. To the point where I ended up cutting into the throat plate of the saw during some bevel cuts. If care is taken while cutting deflection can mostly be avoided but at this price point this saw should be more stiff. I was able to get square cuts but it required a very deliberate cut with little to no lateral pressure on the handle.

There is quite a bit of slop in the miter detents. So it’s pretty easy to move the saw table off the detent a little bit if you aren’t careful while engaging the miter lock. This can result in inaccurate cuts. And the miter lock pin is made of plastic and there is quite a lot of slop in the assembly. I would like to see a more precise metal assembly for this that would make for higher accuracy and greater durability. 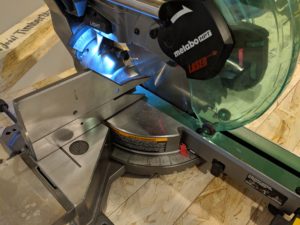 The LED work light is placed too far back and behind the fence. This makes the LEDs useless unless the saw carriage has been pulled almost all the way forward on the rails. Plus the LEDs are on the left side of the saw so the blade casts a shadow when making cuts to the right side of the blade. So it never actually shines directly on the area where the blade actually hits the wood. This makes the feature almost completely useless. Which is sad because the lights are bright and could have been effective. I’d like the LEDs to be moved forward and two of the four LEDs were moved  to the right side of the saw.

At $619 the price for this saw is pretty high. Given the above mentioned issues I’d like to see this at a lower price point.

Currently priced at $619 with the AC/DC adapter and a battery (but no charger) via rebate. This is an impressively powerful cordless/corded saw that gets the job done despite some features that need some work. But for the price this should be a premium saw and those features should work well if not almost perfectly. That said if you aren’t concerned with LEDs or lasers and want a surprisingly powerful cordless/corded miter saw the Metabo HPT is definitely worth a look. 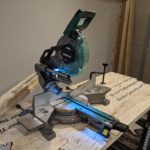 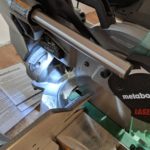 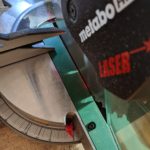 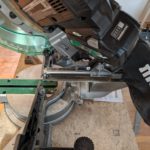 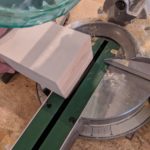 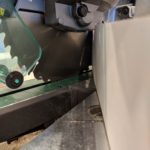 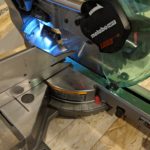 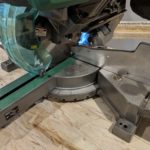 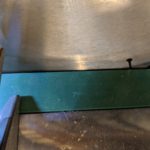 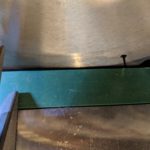 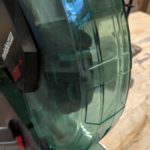 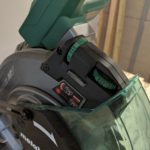 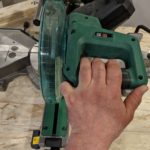 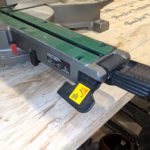 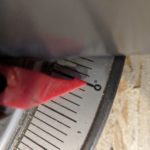 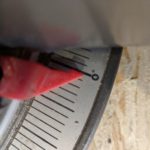 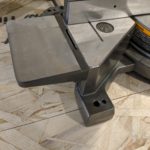