Weight: 7.6 lbs (w/o battery)
It wasn’t that long ago when the thought of a full size 7-1/4″ cordless circular saw didn’t seem all that likely or feasible. Today there are several options ranging from 18V up to 60V and they all boast corded performance in a cordless platform. In this review we’re looking at the DEWALT DCS575T2 FlexVolt 60V MAX 7-1/4″ Circular Saw. This is a full size circular saw designed to be a cordless framing saw with all the capacity and performance of a corded saw. The DEWALT FlexVolt 60V MAX 7-1/4″ Circular Saw was clearly designed for framing contractors that want to cut the cord once and for all. This is full size saw packed with power  and all the capacity that we expect from a framing saw. We tested the saw using DEWALT’s new 60 volt lithium-ion 6 Ah battery pack. These new FlexVolt battery packs can deliver either 20 volt or 60 volt power depending on the tool that it’s connected to. When this battery pack is connected to a 60 volt tool like the FlexVolt circular saw the pack offers 2 Ah hours of power. For 20V tools, the pack is a 6 Ah pack, while this may be confusing it’s an important issue that we’ll discuss in a later article about these new battery packs. The first impression that we got from this saw is how much it sounds like a corded saw when running. This is a big change from other cordless circular saws that we’ve used in the past. Not only does it sound like a corded saw, but it cuts like one too! The saw is listed as a 15 amp motor with 1,600 watts out power which certainly lines up well with corded circular saws in this category. Over the last 5 months we’ve been using this saw while framing a new house. We’ve cut everything from traditional framing lumber to engineered lumber including LVL’s, Paralams, and TJI’s. The saw has an amazing amount of power and never once bogged down or slowed even when cutting tough engineered lumber.

The DCS575T2 has great balance, sight lines, and easy to use depth of cut and bevel settings. The shoe plate is much more substantial than earlier cordless versions from DEWALT which is a nice upgrade for sure. DEWALT makes a big deal out their DEWALT Tough slogan and we think they certainly have earned that accolade. During the framing of a recent house, the crew was cutting a massive LVL ridge beam (26 feet long, 4 plies, 18″ deep)  prior to lifting it into place with a crane. After the first cut was made the crane operator lifted the beam so it could be rolled over to finish the cut on the back side of the beam. The crane operator inadvertently dropped the beam on top of the DEWALT DCS575T2. Needless to say I was pretty annoyed at the sight unfolding in front of me as I was sure the saw would be broken. Much to my surprise the guys yelled up to me that the saw was fine, no broken parts and no signs of distortion. After a closer look we determined that the saw was left unscathed. I was so impressed with the durability of the saw from this event. The guys on the crew were also surprised and kept commenting on how they wish there was a video so guys could see how TOUGH the saw was. Clearly DEWALT has built this saw to take serious jobsite abuse. As you can see, the total potential energy of the pack is 108 watt hours. The Amp Hours is dependent the voltage. If you’re interested in a deeper look at this then read: how the FlexVolt Battery works. So what does this mean about run time? The simple answer is when running the higher voltage the total pack energy is dispensed more quickly compared to a lower voltage tool.

We used the DEWALT FlexVolt Circular Saw for cutting stair stringers for the new house we’re building. The stair stringers were cut from LSL engineered lumber. For this project we had two full flights of stair stringers to cut, 4 stringers for each flight. It took just over 3 full battery charges to finish the cuts. While the power this saw produced was very impressive, we felt the run time was lagging and required us to have another battery fully charged and waiting in order to keep working.

The bottom line is the extra power (from using 60 volts max (54 volts)) is a trade off from run time. There are 18 volt circular saws on the market that also cut this material quite easily (which means sufficient power for the task) and ultimate can achieve much longer run times from the same potential pack energy.

The DEWALT FlexVolt Circular Saw has one noticeable missing feature with the lack of a rafter hook. Every carpenter that’s picked this saw up feel this is a huge oversight in the tools design. Cordless circular saws are extensively used in roof framing which we feel is a necessary safety and convenience feature. This should be an easy modification for DEWALT on any new versions of this saw that come out in the future. You might think this new powerful cordless circular saw would break the bank right? Well we were extremely impressed with the price of this new saw. At the time of this publication the DEWALT DCS575T2 is priced at $399 for the kit that includes the saw, canvas storage bag, (2) 60 V 6 Ah battery packs, and a charger. The kit also includes the new FlexVolt 7-1/4″ blade that’s optimized for performance on this cordless platform. We feel this is an incredible value that puts serious pressure on the other high demand cordless saws in this category.

The FlexVolt full size 7-1/4″ cordless circular saw is an impressive tool that doesn’t compromise on power and performance. This is a serious tool designed for the most rigorous tasks that any framer can subject it to. This saw really does feel as though it’s connected to an AC power source. When DEWALT pushes out the 9 Ah pack later in the year the tool will likely benefit greatly on run time and be one of the most impressive cordless circular saws on the market. We are blown away at the cost for this kit and hope it stays that low (we are speculating that the low cost is an attempt to get users to buy into this new battery platform). With it’s quality build, power, and features this is certainly one of the best cordless circular saws we’ve ever tested. If you need a powerful circular saw then this is the one to buy. If run time is more important to you then we’d suggest waiting for the larger capacity batteries. At just under $400 this is a kit you won’t want to ignore! 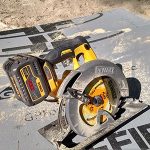 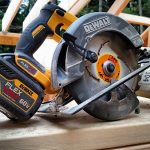 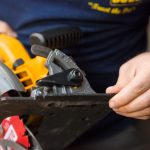 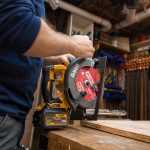 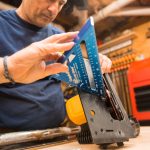 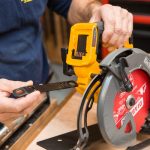 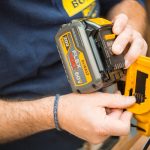 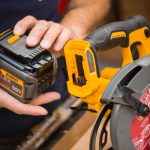 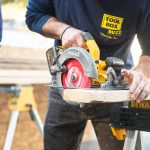 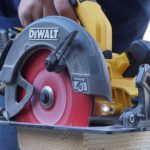 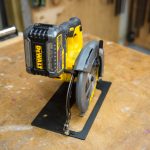 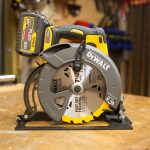 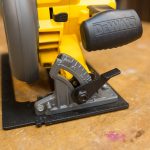 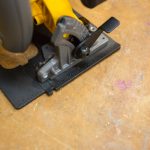 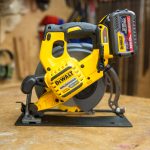 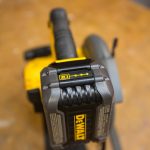 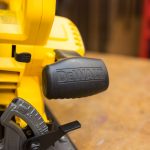 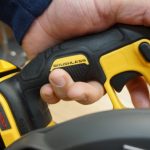