Weight: 8 lbs
Recently, we had a chance to put the DEWALT DCS368 XR With Power Detect™ to the test. DEWALT has certainly given this tool and the other four tools with Power Detect™ a lot of press to educate users as to the power increase that this technology produces.

I usually run a Milwaukee 2721 reciprocating saw. If you follow the Head to Head testing on Toolboxbuzz.com, you may recall that this saw performed quite well in the Head to Head published in December of 2017.  The Milwaukee 2721 bested a field of X cordless saws we tested at that time. So this cordless saw is a beast and was the leader of the pack at that time. I figured that it would be a good comparison saw against which to compare the DEWALT DCS368 XR.

Packing 44% more power than its predecessor, this DEWALT reciprocating saw is a substantial upgrade from previous DEWALT models. But how would it compare to the Milwaukee 2721? 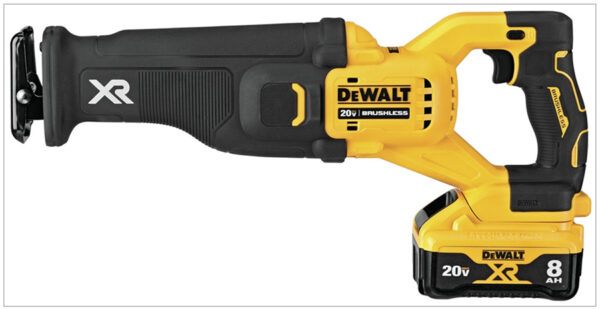 The DEWALT DCS368 XR was very well balanced with a really smooth action. When we plunged the saw into work materials, we felt there was very little kickback. It had plenty of power to cut through a 10 x 10 old-growth oak and it did not bind at all. Additionally, it was able to plunge smoothly into a sill plate we recently replaced. The main reason for this smooth action is due to the new Power DetectTM battery technology. During this fieldwork, we operated the DSC368 saw with an 8 Ah 20v battery and a 10-inch bi-metal DEWALT blade.

DEWALT is taking advantage of the benefits from going with the 21700 lithium-ion battery technology and coupling it with brushless motor technology and more efficient bus designs, and, yes, the Power Detect™ tools are compatible with the regular 20v batteries, but the performance will be about the same as the DEWALT XR tools.

The Power Detect™ tools can also run the Flex Volt batteries. The tools will benefit from the power boost with the FlexVolt batteries. One thing users may notice is that the 8.0 amp-hr battery that came with their new tool is the same size as a 6.0 Amp-Hr Flex Volt one. I imagine that most users will select the same-sized larger power capacity and run the 8.0 amp-hr battery pack. 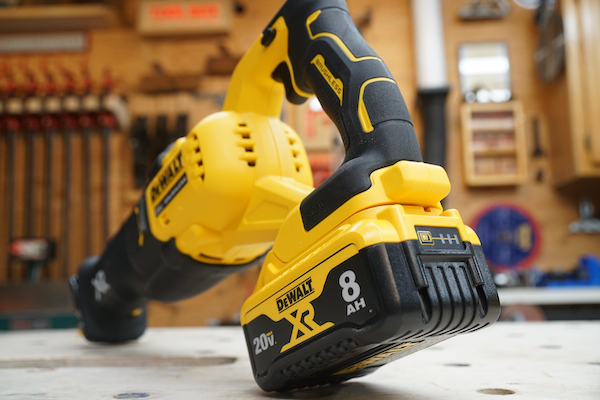 I recently made a number of cuts in several 4” EMT conduits. I thought this would be a good opportunity to see how the DEWALT saw stacked up against the one I have been using for the past 30 months. Since I wanted to have a fair comparison, I set up a weighted pulley system to apply the downward force during the cut. My pulley system has an 11-pound weight that hangs down from a ceiling-mounted pulley. The paracord wraps around another floor-mounted pulley and is attached directly to the tool.

In this way, I held the tool horizontal and the weight of 11 pounds pulls the tool into the workpiece. This type of pulley system is the only way I can ensure that the comparison between the two tools is a level playing field.

Both saws were outfitted with similar-sized batteries – 8.0 Amp-hr for the DEWALT saw and 9.0 Amp-hr for the Milwaukee. Since the test was going to be fairly short in duration, I thought the extra 1.0 Amp-hr would make no difference.

In addition, I had two new Diablo carbide blades. These new blades are specifically designed to cut thin wall conduits. In this way, I could be sure that the cutting blades contributed equally to the way the comparison was run. The only variable left in the test was the relative power and blade speed difference between the DEWALT DCS368 saw and the Milwaukee 2721 saw.

I used a video camera in slow motion mode to time the start of the blade moving and the time that the cut went through the conduit material. Using this slow-motion technique gave me the ability to review the film of each cut and know, with great accuracy, the duration for each cut I made.

I ran the cut test three times for each saw. At the end, I compiled the results and tabulated the results, below. 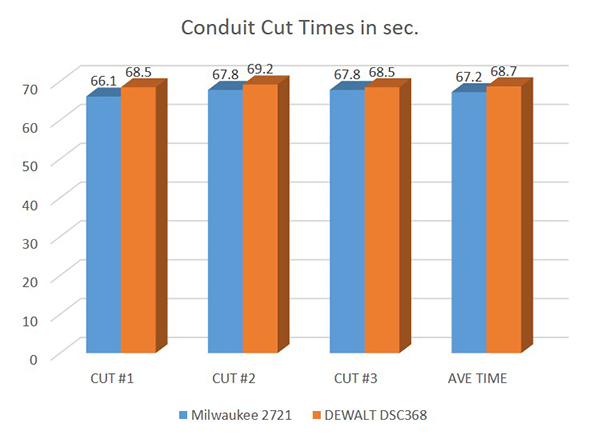 I felt the power of the DEWALT DCS368 XR the moment I started to cut the 4” EMT conduit. It chewed through the thin wall metallic tubing with little problem. The DSC368 is a simple tool and it is easy to use.

It was only after making all of the cuts that I knew the new DEWALT Power Detect™ was going to measure up well in this comparison. As you can see in the table and graph, the DEWALT saw was within 2.0% of the identical performance to the Milwaukee saw. The new battery technology and the other changes have made a substantial difference.

In the previous TBB test using similar test techniques, the DEWALT entrant took 38% longer than the top-rated Milwaukee saw in a similar type of conduit cutting test. Since that Head to Head, DEWALT closed the performance gap to only 2.0% difference in my comparison. That is a remarkable improvement.

It is all in the math

This figure is identical to the metric produced by the Milwaukee saw. No wonder these saws produce nearly identical performance numbers. One caution, however, is that this Stroke Speed is for a saw that is not under load and the multiplication produces a result that is under no-load conditions. So it is not an absolute comparison indicator. 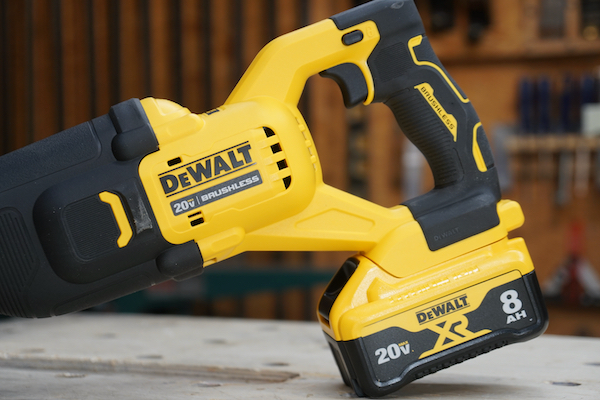 Dewalt hit the user experience mark with the DSC368 saw. We immediately liked the look, feel, and size of this saw. Its compact and lightweight design was evident from first use until I later zipped it up in the tool bag.

The compact size of the DEWALT DCS368 XR allows it to better fit between stud and joist bays as well as confined spaces. The tool weighs 5 lbs., [without battery], and measures 14.5” in length.

The shape and design makes the saw smaller and more compact, than traditional reciprocating saws, as well as allowed us more control and balance.

The DEWALT DCS368 XR gives the user a 1-1/8″ stroke length. The variable speed trigger allows this reciprocating saw to deliver from a stopped condition the full speed range up to 3,000 strokes per minute. 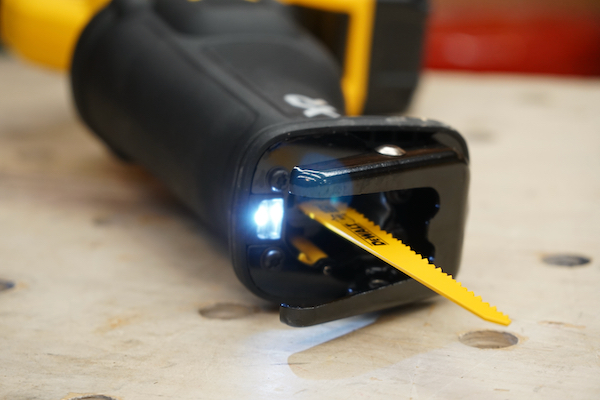 The DEWALT DCS368 XR features a lever-action, 2-position, blade clamp for quick and easy blade changes in two directions for a variety of applications including flush cutting. At the end with the blade changing lever, a bright single LED light illuminates the blade area.

The DSC368 has a rubberized anti-slip grip [rubber boot] which helps increase safety around the front end of the tool to help absorb vibration and reduce hand fatigue.

At the other end of the saw, the tool’s trigger handle is amazingly comfortable. In fact, it may well be the best-fitting and comfortable tool handle among the manufacturers I have used. DEWALT really hit the mark with their handle design on the DSC368. 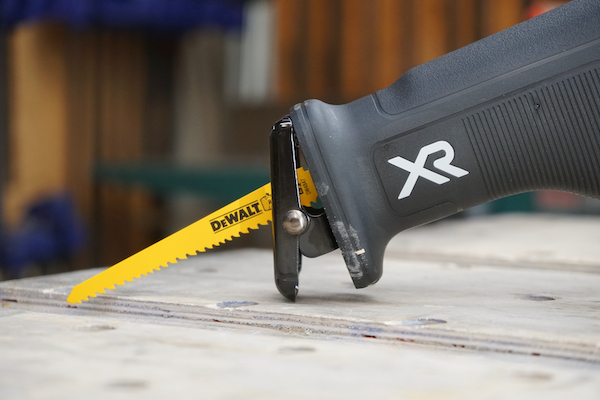 There are two things on the DSC368 that I think need attention. Firstly, I’d like to see the addition of a rafter hook on this tool. While I may not always use one, The times when I am on a high-lift, I would like to hook this tool on the top rail, not set it onto the floor where I am sure to either kick it or trip over it.

Second, I think the lack of a shoe that adjusts outward from the nose of the saw is a real oversight. This feature, present on many other saws, allows me to get additional life out of a worn blade while also allowing me to have the shoe to press up against the material I’m cutting. With the current configuration of the DSC368, if a blade wears out next to the shoe, the user must replace the blade, even though there may be several inches of the blade that is still used. 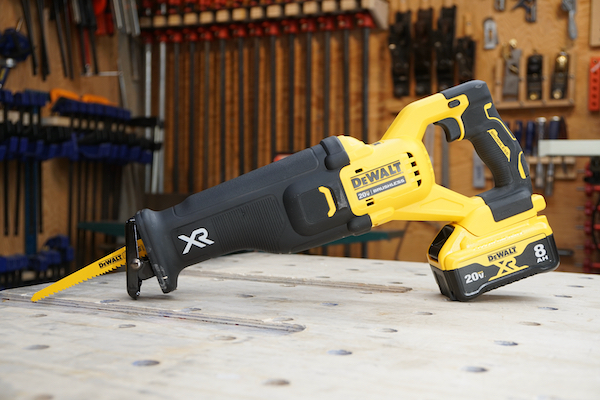 Final Thoughts On The DSC368 Saw

Overall, the DEWALT 20 Volt XR Reciprocating Saw With Power Detect™ is a powerful, well-balanced, and ergonomically comfortable tool. DEWALT has done an admirable job of increasing the tool performance with their Power Detect™ technology and other improvements. Clearly, the performance we saw, should warrant folks to give strong consideration to adding this reciprocating saw to their tool inventory

The DSC368 is a basic but full-featured saw. I only wish it had a rafter hook and an outwardly adjustable shoe. With those,  this saw would be close to becoming a leader in its category. As it is, I give this saw 4.7 stars out of 5.