Weight: 7.2 lbs
Paslode recently introduced their newest nailer model; the Paslode 30° XP Framing Nailer with fuel-powered performance. The new Model CFN325XP (#906300) is engineered, built, and tested with the PRO in mind so it was a natural fit for us to bring along to the job site and review for our PRO readers.  Per Paslode’s Senior Product Manager, It addresses common nailer shortfall in 4 main areas:

“Increased efficiency of loading nails, redesigned grip for better comfort and control, improved performance when rapid-firing nails, and easy battery removal. All of these features have been added to this new model solving pro’s key pain points.”

We evaluated these focus areas as well as all around performance throughout our test period and came away impressed with the Paslode 30° XP Framing Nailer (Model CFN325XP). So let’s get into the specifics! 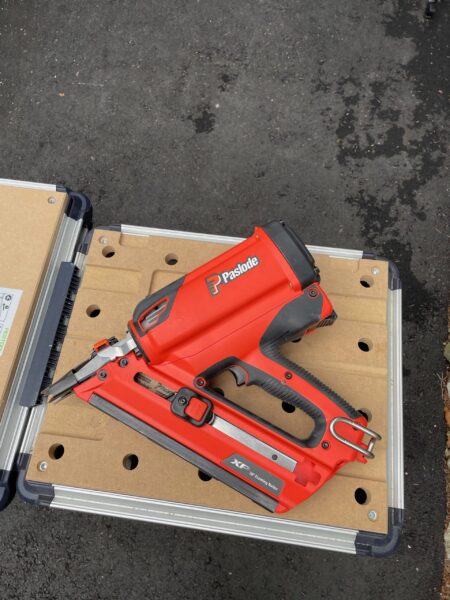 I was impressed by the Paslode CFN325XP’s overall power from the first nail to the last. I had used my share of pneumatic framing nailers over the years and had come to rely on their reliability and consistent performance. Recently, I added a few battery-based cordless nailers to my kit. The Paslode CFN325XP’s Fuel cell & battery design is phenomenal. We used the CFN325XP over the course of a few weeks to set framing, place LVL’s, and erect sheathing. The performance of both the fuel cell and battery came as advertised. In full sequential mode, it seemed to easily drive 2 nails/sec (although we rarely sustain that driving rate) with no noticeable power loss. 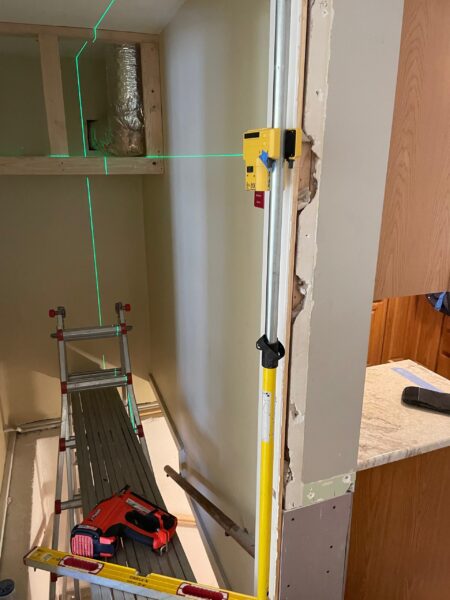 The fuel canister loading was hard to mess up and seems quite reliable. Once locked in place it’s secure and protected from damage. The nozzle that swivels to attach the hose to the canister is held in place by metal swing arms. This typifies the overall quality of construction as it would have been easy for Paslode to use less durable materials on the arms since they are completely covered, yet they did not.  The case also has storage spots for 3x additional canisters which should cover the fuel required for almost 5,000 nails. We knew everything was working when we heard the fan start-up and could see some fumes form around the nozzle area. The smell is a bit pungent but, when used in a well-ventialted area as highly recommended, it wasn’t a major factor. 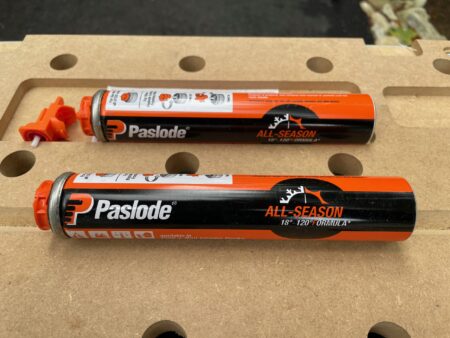 We were pleased the Paslode CFN325XP delivered impressive power from such a compact and light nailer. The compact size (14.5 inch total length) allowed us to easily fit the nailer between studs and joists when required. I’ve used other nailers where this was possible but not easily done. The only tradeoff on the compact size was the limitation from using an extended capacity magazine but we’re used to that job site trade-off for 30° nailers. 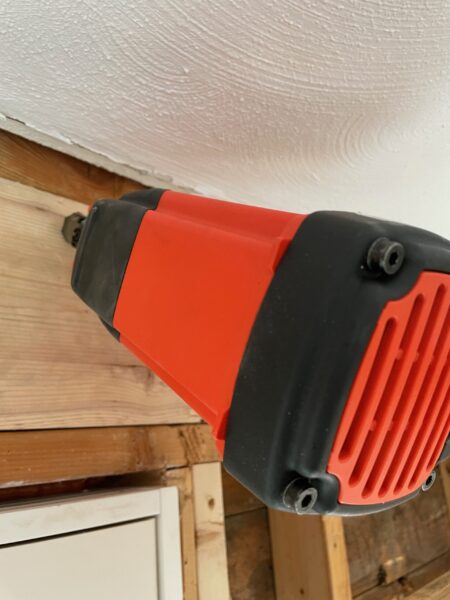 I was also a big fan of the non-slip, non-mar tip. The non-slip (4x pronged) design of the tip allows it to stay in place once set even if nailing overhead or at an awkward angle. The non-mar design of the tip disperses the prong pressure evenly to reduce the indents caused by the tip. This wasn’t a huge factor on the job site though as we are rarely concerned about mars on rough framing and carpentry. 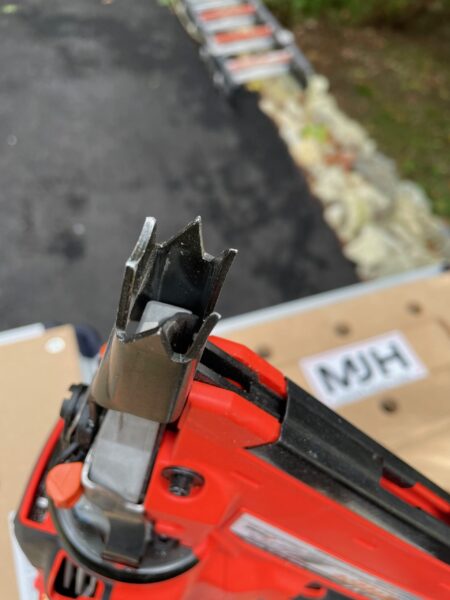 The last performance feature that really stood out was the nail lock-out feature. Simply explained, there is a design mechanism that prevents the Paslode CFN325XP from firing when nails are not loaded. This is especially important because of the high-power, fuel-based firing design of the nailer. The resistance of the nail against the force of the expanding gas on the ignition chamber is balanced to prevent damage to the driving pin. If the gun were to fire without a nail there is an increased chance of damage to the driving pin.

The Paslode CFN325XP weighs in at a trim 7.2 lbs.  This is comparable to many pneumatic framing nailers but gives you the added freedom and balance of not having an air hose pulling back on the gun during operation. And while many of the Paslode CFN325XP’s battery-based competitors also offer the benefits of hose-free operations, they also weigh, on average, a few more pounds. Even when well balanced to distribute the added weight of the larger battery, the added weight (sometimes significantly) increases fatigue. And if you want to drive more nails with a battery-based nailer, you have to bring (and charge) extra batteries. Needless to say, we were very impressed by this nailer’s low weight and great balance! 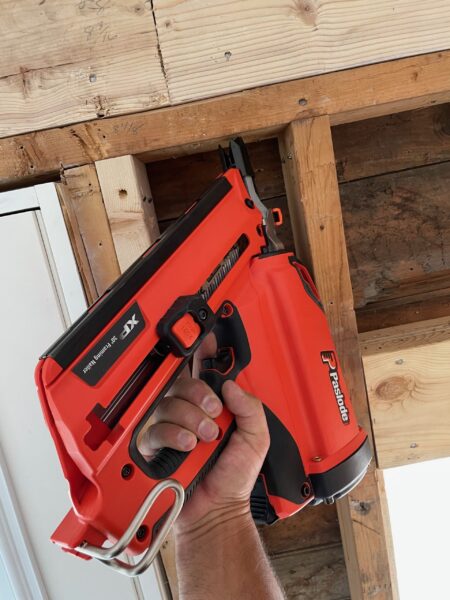 We also appreciated the battery 2-point lock design.  The battery clicks into place at position 1 but does not actually supply power. To fully set the battery in place you need to again press the locking button and seat the battery at position 2. This was great because it meant that the battery was always securely stored; either in the gun or the charger. But when in the gun (and locked in position 1) there was no chance of accidental misfire because there was no energy source available to cause a spark in the ignition chamber. 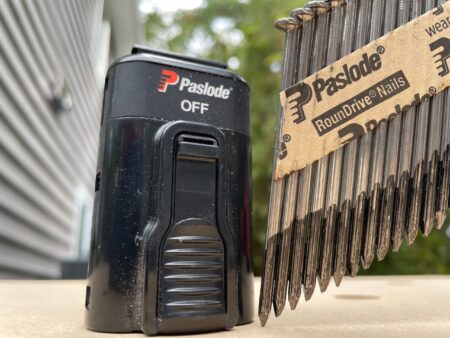 One safety feature to note with any fuel-based nailer is that the combustion causes a release of carbon monoxide. For this reason, Paslode HIGHLY recommends this nailer is used only in well-ventialted work areas. We’re not sure how difficult it would be but it would be cool to see future versions of Paslode fuel-based nailers have an integrated CO sensor.

The Paslode CFN325XP continued to shine in this area. We LOVED the tool-free depth setting and found that it worked exceptionally well. When working on consistently dense materials, the performance was extremely even and predictable and didn’t require us to adjust as we worked our way through the fuel source. You simply pinch either side of the depth gauge and slide up or down. And because there is no lever or small adjustment wrench required, it was easy to do while wearing work gloves. Every minute saved is more work done in a day, so we appreciated this simple yet very effective design feature!

The other adjustable feature on the Paslode CFN325XP is the rafter/belt hook. In order to change the angle/position of the hook, you pull back on the hook against the spring tension. Then you can swivel the hook 180°. When facing the left (operator’s perspective) side of the tool there is ample clearance for the hook to fit over a standard 2x. And when rotated to the right side of the tool the hook is in a more compact position so you can hang it on your work belt. The tool is light enough that this is a reasonable option and with the tip facing backward when on the belt, the chance of poking yourself with the no-slip tip is minimal.

We would have like to seen hex key stored on board.  We had one nail jam and needed the hex key to assist in clearing the jam and  of  course this happened first thing on a Monday morning . 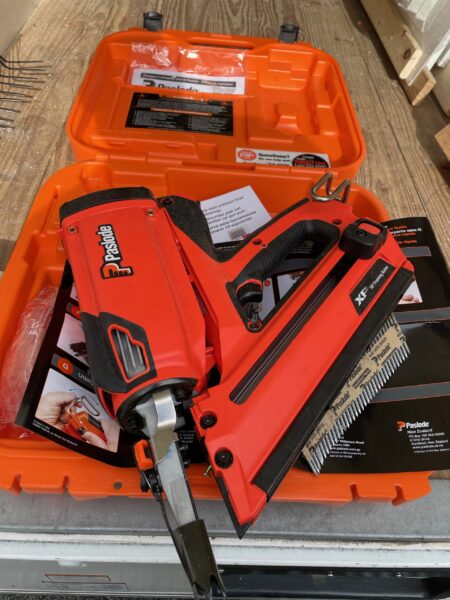 Overall we were thoroughly impressed with the Paslode CFN325XP. It is a feature-rich nail gun that strikes the perfect balance of power, comfort, sleekness and ease of use. It performed flawlessly no matter the day, task, materials, or operator (yea, that’s a thing too) we threw at it. At $399 it’s on the expensive end of the spectrum, but for a difference of $50-100, it’s worth every penny. The CFN325XP proves that you get what you pay for so you might as well get one of the best framing nailers on the market. We’re sure glad we did! The only thing we turned our nose up at (sometimes literally) was the smell of the fuel after extended use. But having adequate ventilation makes all the difference in taking care of this easily fixed issue. 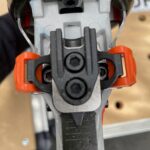 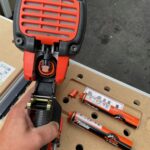 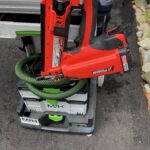 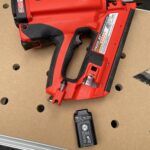 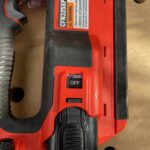 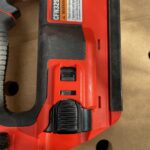