Weight: 14.4 Lbs
Metabo HPT’s new 36V MutliVolt cordless band saw Model #CB3612DA is a powerful and versatile tool, perfectly suited for in-field cutting tasks. Cordless band saws are an invaluable asset to many trades. The mechanical trades use portable or cordless band saws daily. However, other trades often overlook these versatile tools. Metabo HPT is changing that with this impressive new MultiVolt band saw. This tool review will take an in-depth look at the cutting performance and features of this new offering from Metabo HPT. 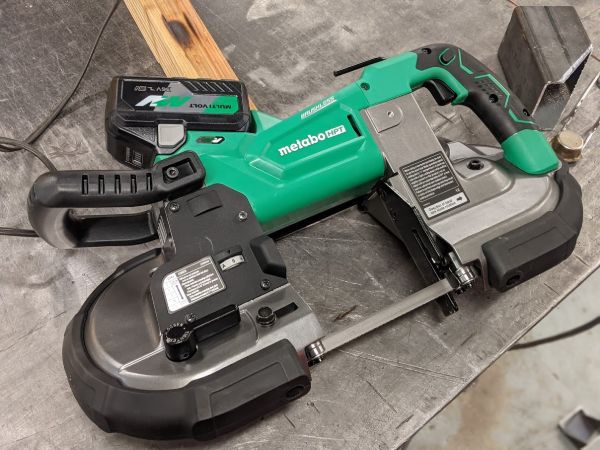 I first learned the value of a portable bandsaw as a site work contractor doing punch list work. Typically, a gas-powered cut-off saw was the go-to option for in-field cutting tasks. However, these saws require extra safety gear and precautions. The noise and fumes are also unwelcome by pedestrians. I bought my first corded portable band saw on a whim. I immediately saw the tremendous value and versatility in it. A portable band saw creates less noise and little or no sparks. The quality of the cut is also more refined and accurate. Now after using the Metabo HPT MultiVolt band saw, I have an even more versatile and portable option. 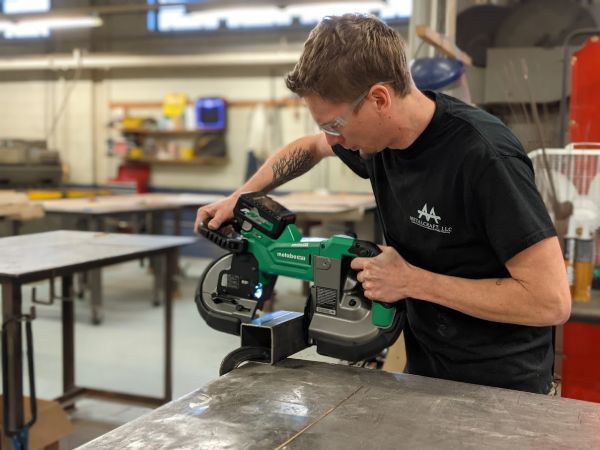 To get honest professional feedback on this review, I brought the Metabo HPT band saw to a metalworker. My brother, Cody Bartosik, is a welder and fabricator for Metalcraft, LLC in Bantam, CT. The guys there were kind enough to allow me to visit their shop and put the MultiVolt saw through a variety of tasks. Everyone at Metalcraft is a dedicated craftsman with experience building all types of custom projects. 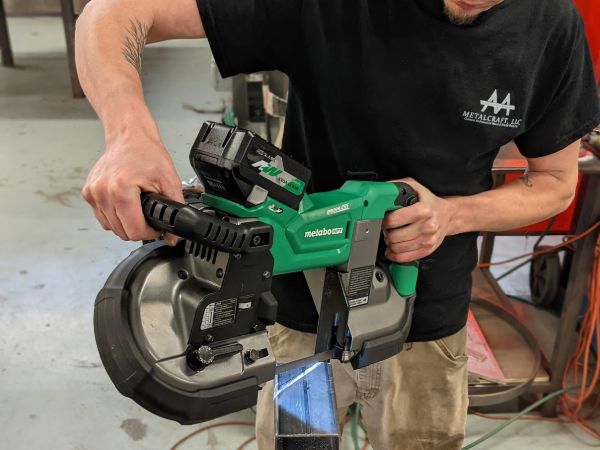 The combination of a brushless motor with a 36V MultiVolt battery system makes the Metabo HPT band saw a powerful cutting machine. During testing, the saw was used on a variety of metal materials. One particularly demanding cut was at 45° through a piece of 3″x3″ piece of square tubing with 1/4″ thick walls. The saw performed this task with ease. Metabo HPT claims that their motor is 16% faster than the closest competition. After using the saw in-hand, these performance claims seem realistic. Because the motor is MultiVolt capable, the saw can be used with a Metabo HPT AC Adapter for uninterrupted corded power when convenient.

Ease of Blade Change and Adjustability 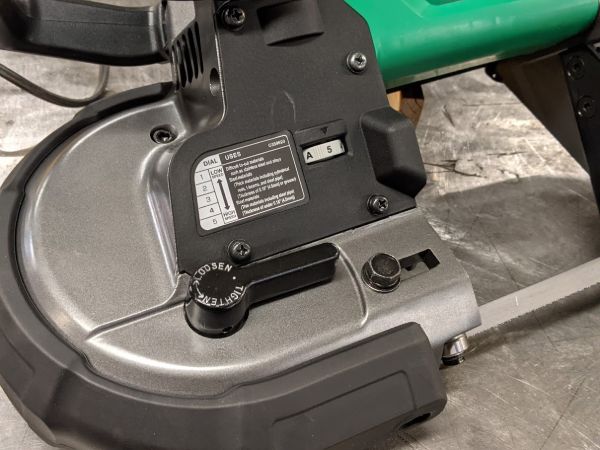 Blade change and speed adjustment are extremely simple on the MultiVolt band saw. A rotary dial cycles through the 5 standard settings as well as the Auto mode. There is a large steel tension adjustment lever located on the top of the housing. This lever engages and releases the tension on the blade. The included Bi-Metal blade was impressive and capable during use. However, the Metabo HPT saw is compatible with all manufacturer blades in an industry-standard size. 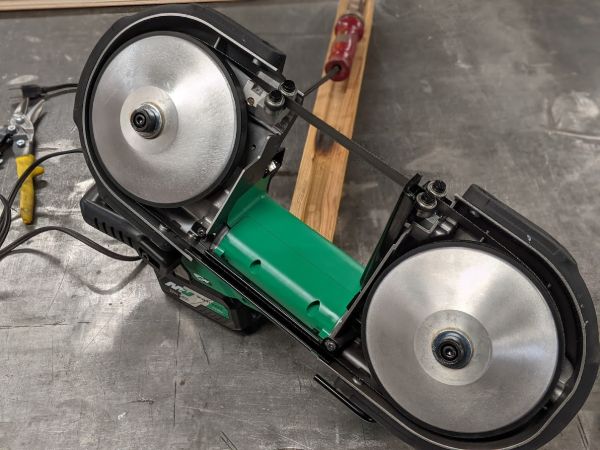 Blade change is fast and simple. The two sets of steel rollers easily align the blade. The two drums have a contoured edge making it hassle-free to align the saw blade. 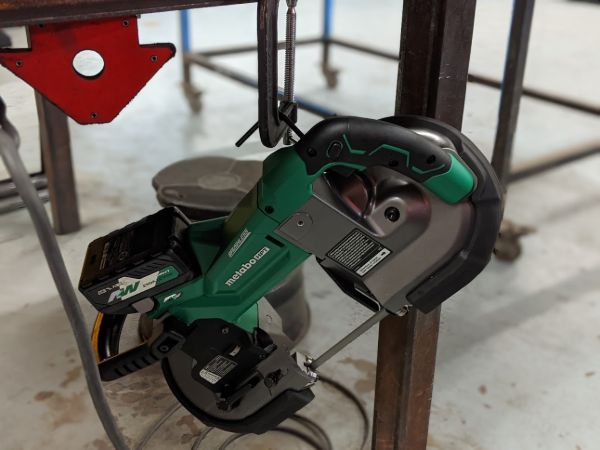 Metabo HPT integrated a folding storage hook into the design of the MultiVolt band saw. This hook is a welcomed addition for stowing the saw on a bench, sawhorse, or work station. It is not obtrusive and folds flat when not needed. 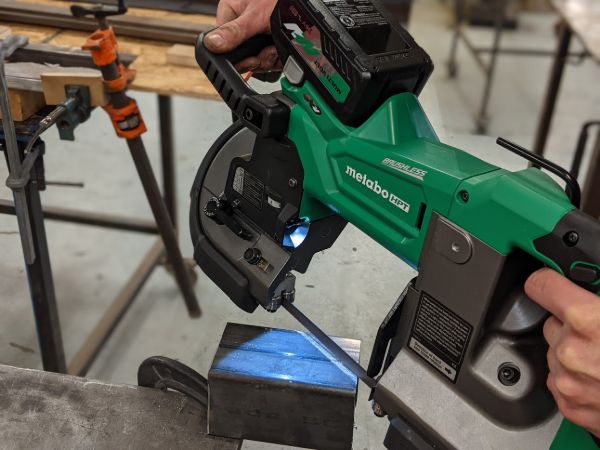 The band saw’s white LED work-light creates a clear and highly visible work surface. It is located on the front end of the tool and projects backward towards the user. It activates by pressing the activation switch and will stay on after the switch is released for a short time. The slim top portion of the tool body combined with the bright light gives the user excellent visibility of the material that is being cut.

The MultiVolt band saw is available now online and from Metabo HPT dealers. Currently, the saw sells for $489.00 as a kit with a saw, battery, charger, blade, and case. That is a large price tag for many users. However, there is no denying that you get a powerful and capable tool for the money. Ideally, I would like to see this tool offered as a bare tool instead of a kit. A bare toll option would cut down the initial cost of the tool for current Metabo HPT platform users. This would also give users the option of building a personalized configuration to better suit their needs. For example, I would opt for a 4 Port Charger instead of the factory kit’s standard rapid charger.

Click the Buy Now link below to purchase the MultiVolt band saw from our friends at ACME Tools, as well as view their current Metabo HPT promotions.

Who Should Buy the MultiVolt Band Saw? 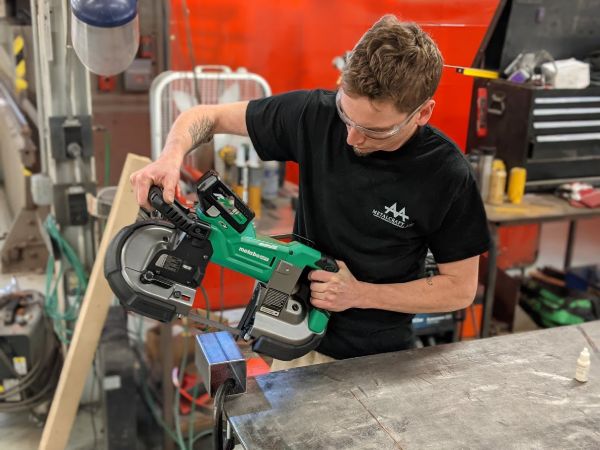 The MultiVolt band saw is an excellent option for any dedicated professional in the construction trades. It excels when cutting steel pipe, Unistrut, threaded rod, or other common materials. Additionally, any pro working with reinforcing steel, anchor bolts, or other steel products would benefit from the power, portability, and capability of the Metabo HPT saw. When considering Metabo HPT’s other offerings, such as their MultiVolt Rebar Cutter/Bender as well as their Duplex Cordless Nailer, Metabo HPT is positioning themselves to be a go-to brand for concrete contractors and Ironworkers. 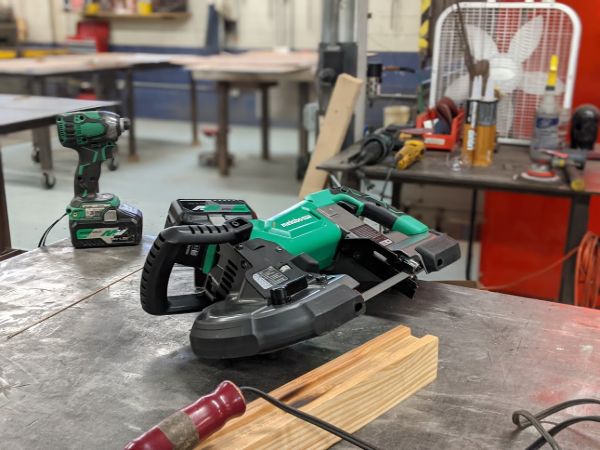 Overall the MultiVolt band saw is a well-designed and capable tool. My only complaint would be that it is heavy. It is a stout little beast at 16.5 Lbs. with a 4.0 Ah battery inserted. This weight is not something I would want to work with overhead or at odd angles for very long. However, for standard perpendicular material cutting, that weight becomes an asset. As my brother stated, “the extra weight helps guide the tool into the cut easily and keep things lined up”. In my experience, a portable band acts as a swiss army knife on a lot of different job sites. I constantly discover new uses for one.

The Metabo HPT 36V MultiVolt cordless band saw packs powerful cutting capability and performance into a robust and versatile package. This tool is an excellent option for a variety of dedicated professional trades. If you cut a variety if metal materials on a regular basis, then the MultiVolt band saw may be the new swiss army knife you have been searching for. 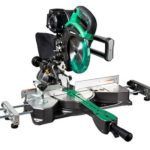 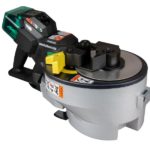 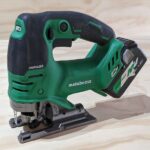 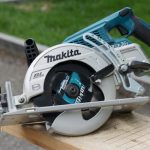