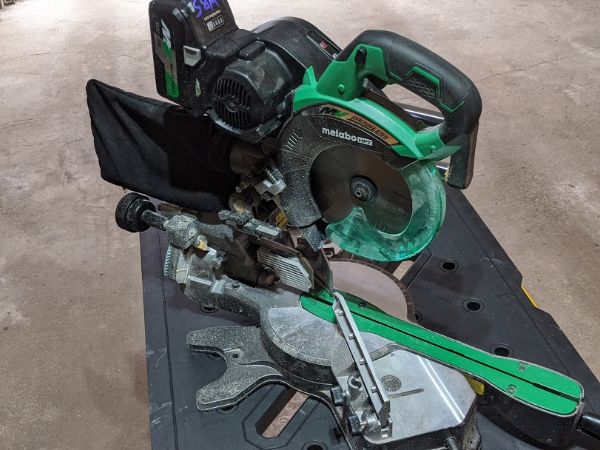 This saw is a flagship for the Metabo HPT 36V MultiVolt line of cordless tools. After spending time with it during testing and field use, I can see why. The MultiVolt miter saw fits many niches of the construction industry. 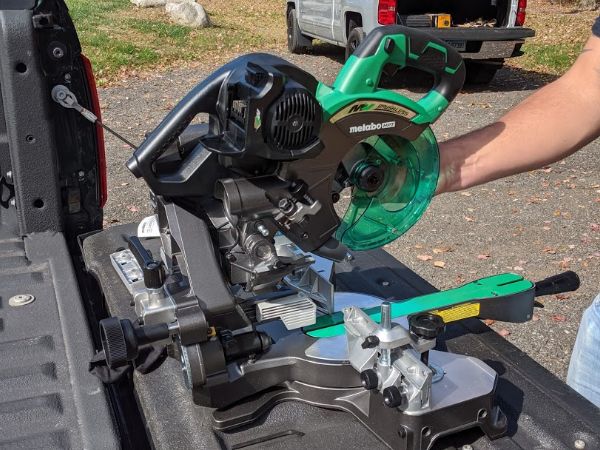 Several features stood out to me during testing as truly excellent and geared towards a professional end user. The first is the micro bevel adjustment system. 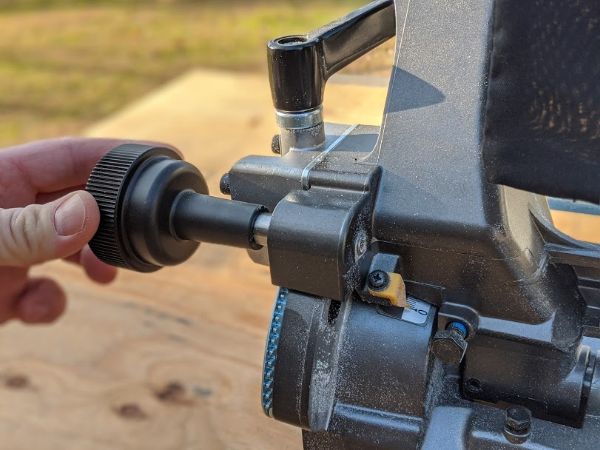 This over sized knurled knob is used to precisely dial in your desired bevel angle. The knob is intuitive and responsive to use, and more importantly repeatably accurate. I verified this using a digital angle gauge. The angle gauge markings are also clear and easy to read from either side of the saw. 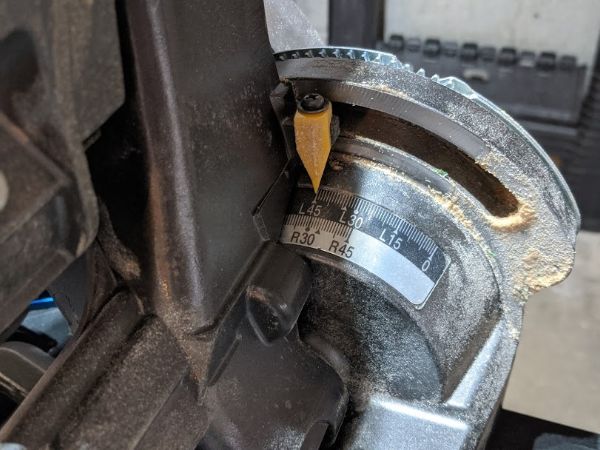 To stabilize the saw laterally, Metabo HPT designed a set of removable outriggers that slide into the sides of the saw’s base. The outriggers act as small extension wings and include two manual leveling feet on each side. The ability to adjust these feet greatly helps to stabilize the MultiVolt miter saw. 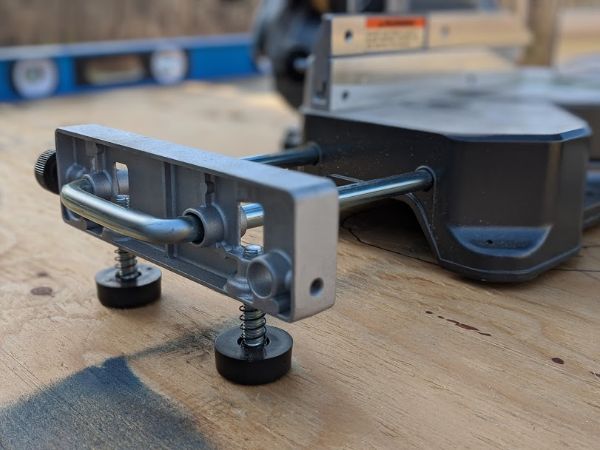 Metabo HPT designed a folding dado adjustment on the left side of the drive housing. This allows the MultiVolt miter saw to make dado cuts without changing the blade. Leave the tablesaw in the trailer! A folding riser lever is available for working with thicker materials beyond the reach of the manually adjusting depth guide. 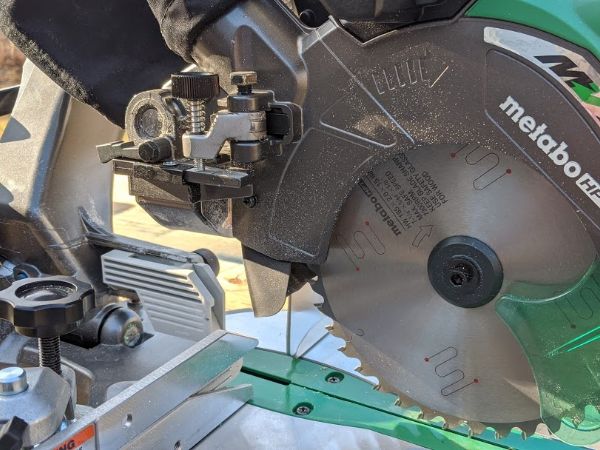 The overall compact size and power of the MultiVolt miter saw are hard to miss. At just 34.0 pounds as a bare tool it is easily carried with one hand and maneuvered in tight spaces. The twin front rail design is smooth and accurate and allows the saw to be easily stored or set up in confined spaces like a hallway or closet. 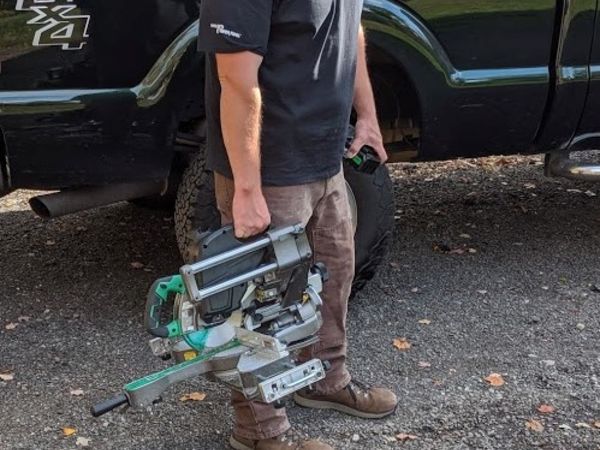 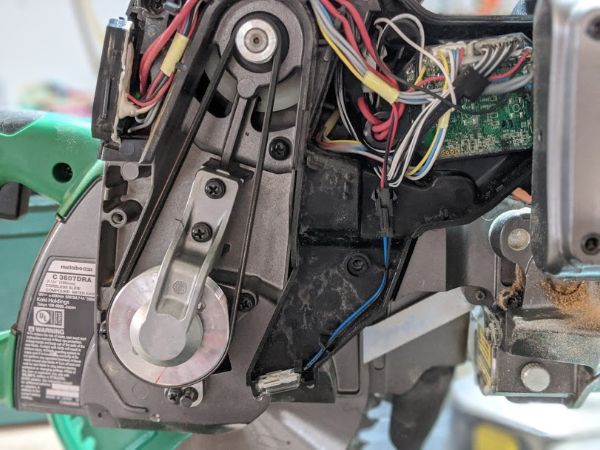 The inner workings of the belt drive system and flashy bits. The second smaller belt is housed on the opposite side behind the blade.

The belt drive system uses splined wheels as torque multipliers. This is all works in conjunction with Metabo HPT’s constant speed control system that automatically adjusts  blade speed and torque based upon demand. During testing I was able to cross cut 2×10 LVL framing lumber with no felt vibration, slowdown, or bogging down. This system is similar to the technology used in their MultiVolt 7 1/4″ Circular Saw which we previously reviewed.

Metabo HPT advertises the MultiVolt miter saw as capable of performing approximately 500 cuts through MDF material on a single battery charge. I chose to test the saw’s capability on framing lumber. On a fully charged 4.0 Ah 36V MultiVolt battery, the saw performed 188 crosscuts of 2×8 lumber at 90 degrees. 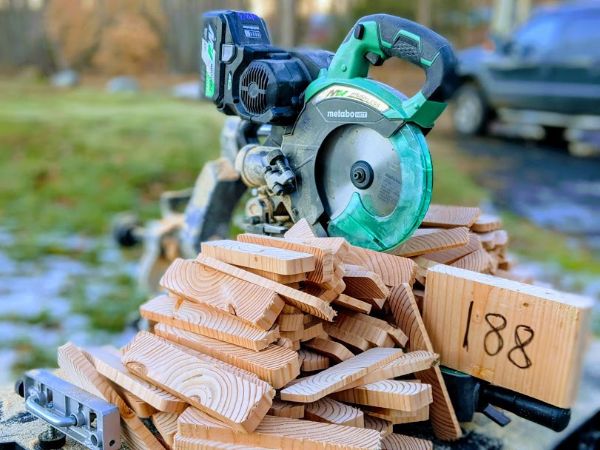 It is worth noting that the test was performed in an unheated work space with the temperature just above freezing mark. In a more optimal setting the saw may have performed even more cuts, but this represents real world working conditions of winter in New England. This was an impressive showing regardless by the Metabo HPT MultiVolt saw.

The MultiVolt miter saw includes a well thought out LED work light system. A bright white LED light is loacted on either side of the saw blade housing. These lights project down onto the work surface to give a very clear picture of what you are cutting. The lights are also selectable. By cycling through the light control button on the top of the saw I was able to chose both lights on, or left, and right separately. 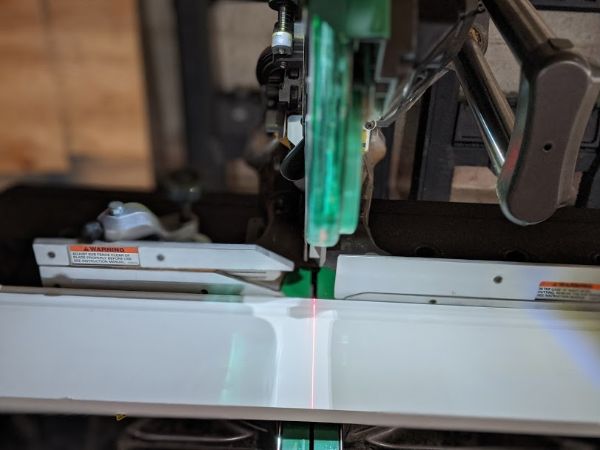 A red laser cut guide is also included. The laser is very bright and came accurate out of the box. The laser has built in adjustability to allow the user to select left or right of the blade and also the thickness of the projected beam. 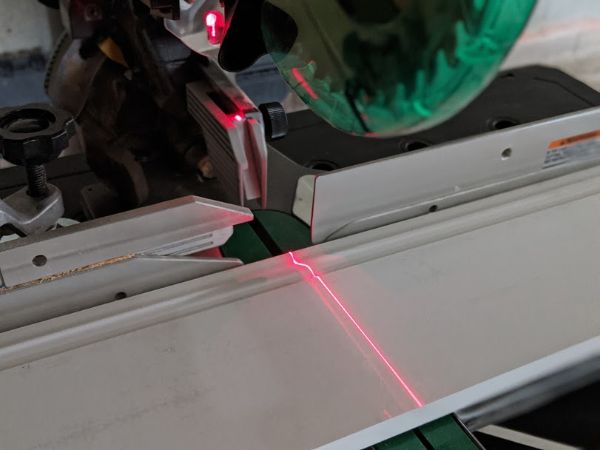 To gauge the saw’s accuracy out of the box, a set of precision measurement tools were used. 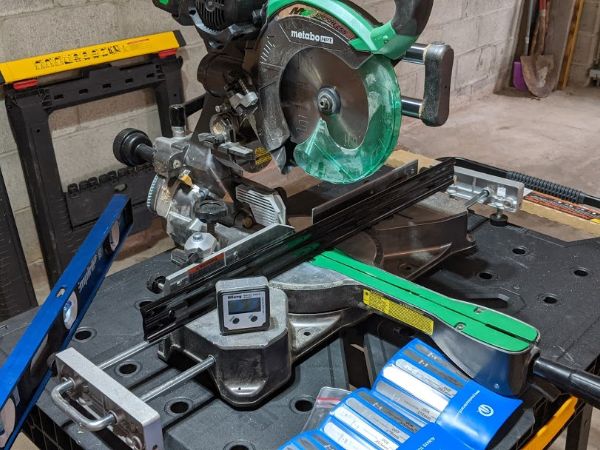 Digital angle gauge, calibrated straight edge, squares, and feeler gauges. All used to gauge the saw’s out of box accuracy.

Straight from the packaging, the base of my saw was accurate within .0015″. However the rotating table dropped by .007″ which would need to be accounted for while setting up materials for a cut. This variance in the two base heights is common amongst most miter saws. 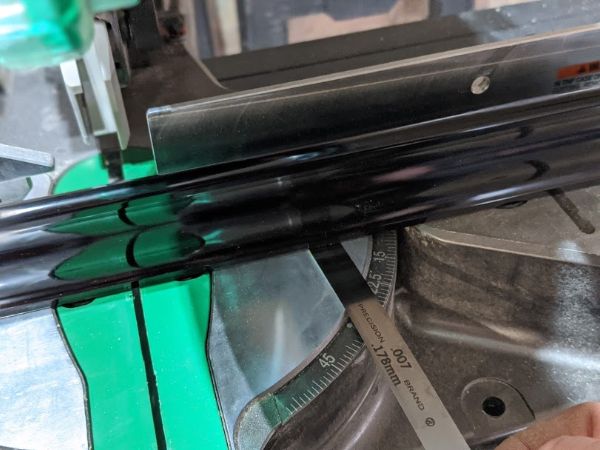 This difference in base heights did not affect the 90 degree accuracy of the saw. I was therefore able to achieve accurate cuts out of the box. The factory provided 24 tooth general purpose blade from Metabo HPT yielded good quality results. I am confident that a higher quality replacement blade would result in even greater degrees of accuracy. 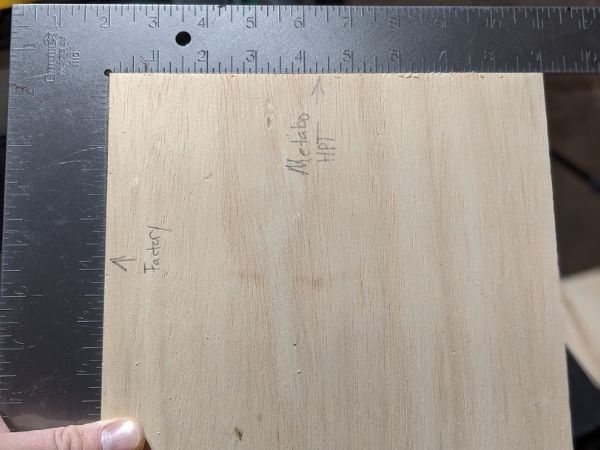 A 90 Degree test cut made through a piece of 1/4″ plywood and checked using a Empire square. 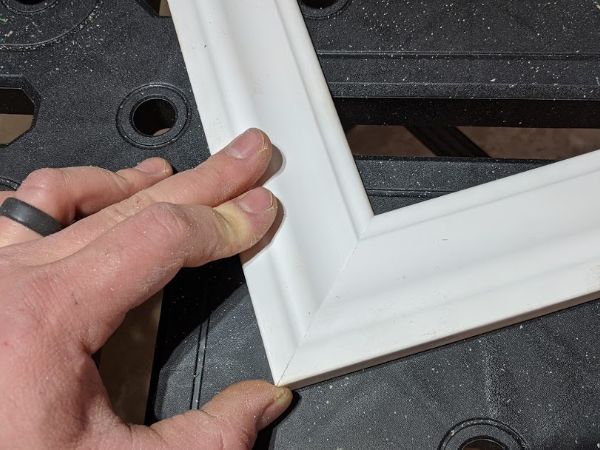 One issue encountered was the design of the fence on the MultiVolt miter saw. The fixed lower portion of the fence was close to square out of the box on my testing saw. The right side showed a slight variance resulting in a .002″ gap on the inner portion. 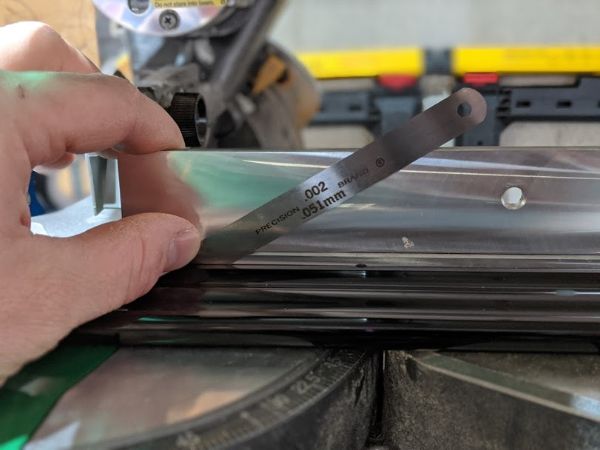 The upper sliding portions of the fence use threaded thumb screws to secure themselves in the track. When tightened, the upper half tilts itself backwards creating a gap between it and the material you are cutting. This results in a loss of accuracy for taller pieces of material. Such as moldings stood upright and placed against the fence. 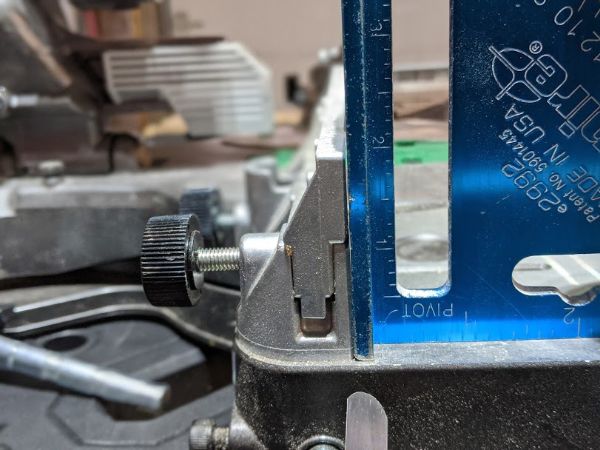 Miter saw accuracy is one of the top concerns for many professionals working in the carpentry trades. However, there are varying degrees of acceptable accuracy among many of the trades as well. By knowing these acceptable tolerances you can decide for yourself if this level of accuracy is acceptable.

The premium features and exceptional build quality of this saw command a premium price. The MultiVolt miter saw is currently available for $1,249.00 as a bare tool. Our friends over at Acme Tools have it in stock. Follow the buy it now box to check one out for yourself.

This is a lot of money plain and simple. In fact, the price point places this saw as a bare tool close to that of top tier corded, full sized, miter saws. I think it is on the high side. I would love to see Metabo HPT bring it down slightly and place it in the sub $1,000.00 range to make it more competitive. However, doing so would likely sacrifice some features or result in relocation of manufacturing. A sub $1K saw would likely be produced in that country we all like to complain about so much. Some times you have to pay for principals.

Having used this saw and examined it closely, I would absolutely buy it again. The feature list combined with the portability and general handiness of the saw would recoup the added initial expense in my opinion.

Room For Improvement With the Metabo HPT MultiVolt Miter Saw

A couple of issues became present while testing the saw, causing me to not give it a perfect score. The base of the saw was the biggest one. The compact size and small profile results from Metabo HPT giving the saw a triangular base profile as opposed to a conventional square. The MHPT miter saw rocks forward very easily, especially when fully extended. This creates an unstable and therefore unsafe platform to work with. 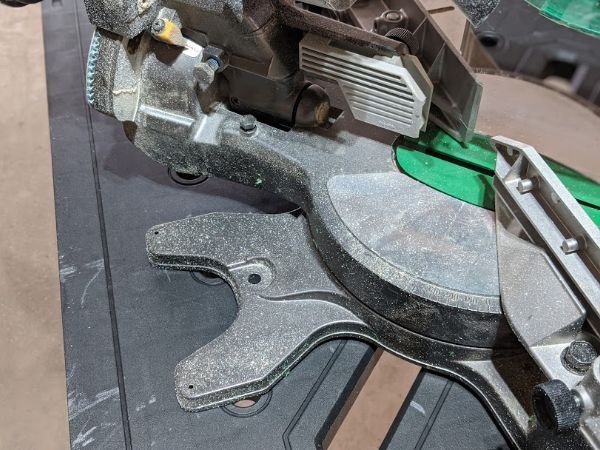 If secured to a bench with a clamp, the saw is then incapable of mitering as easily. By clamping the rear of the saw down at the point shown above, the miter table can not be turned without removing the clamp and then resetting it after reaching your desired position. Screwing it down is an option, but doing so sacrifices some of the portability and maneuverability of the saw.

How about a saw stand? Again, because of the triangular base conventional stand brackets will not work. Metabo HPT offers an adapter bar, but it is only available with their own miter stand. Taking the cost of the saw into consideration, the bracket should be included with the saw.

Who Would Benefit From Owning This Saw?

The MultiVolt 7-1/4″ miter saw represents one of the highest quality and well thought out tools that I have had the pleasure of working with. I think back to my days doing concrete form work in the heavy/highway construction world and this saw would have been a godsend. Common and readily available blade size, compact and lightweight design, repeatable accuracy, impressive cutting capability, powerful batteries or the option of a cord with the MultiVolt system. 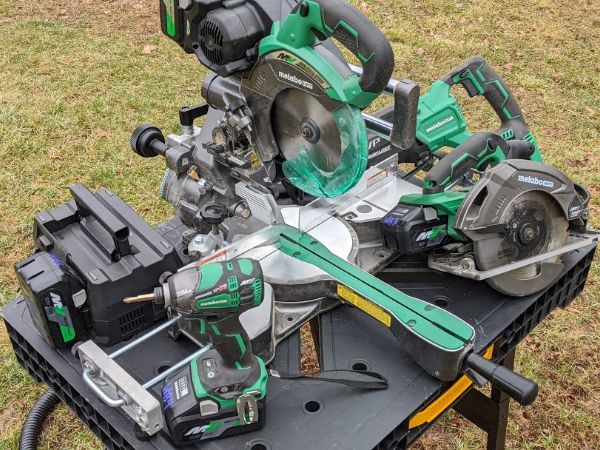 All of these traits add up to a saw that would make any form builder or industrial carpenter happy as hell. A remodeler looking for a small saw to easily store in their trailer or a flooring contractor looking for a saw to move from room to room while cutting hardwood flooring. Any of these trades would benefit from the Metabo HPT MultiVolt miter saw.

More importantly this is another offering from a great system of tools. Metabo HPT’s continuing advances in the cordless tool world are something that we can all benefit from.