Power source: Battery
Makita has recently released their new 1/2″ Right Angle Drills. When you think of right-angle drills most of us want a power cord attached for prolonged use and uninterrupted power, especially for plumbers and electricians. Some say if it’s not Milwaukee then they don’t want it. Well, I am here to tell you that Makita is here to compete, if not be the one to beat. The Makita XAD03PT 36V is loaded with two, yes two, 18v 5.0AH batteries to achieve 36 volts. The little brother is a more compact and smaller 18v Right Angle Drill XAD05Z which is also no wimp. In addition to the battery life, both Makita right angle drills have plenty of torque and power. I was highly impressed with both right-angle drills as outlined below. 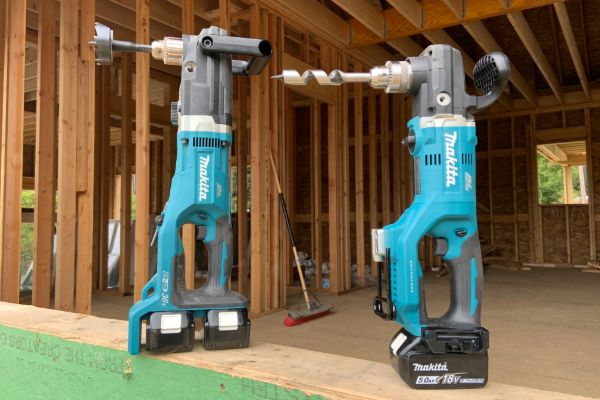 This big boy is well-made. It’s large, powerful and it does exactly what it’s designed to do. I drilled hundreds of holes with this drill to rough-in plumbing and electrical on a new residential construction project. I drilled a wide variety of sized holes ranging from 1/2″ to 4″. In addition to using it myself, I passed it around to several other electricians and plumbers. Every single person who used this beast of a right-angle drill was highly impressed. Many were intrigued by the dual batteries and surprised by how long they lasted. Others loved the power. To quote one of the guys, “this thing freaking rips”, as he’s standing around with a 2-foot long drill attached and just blowing out holes for the wire.

Everyone who used the Makita XAD03PT was impressed with the power, especially in reverse. A couple of the guys said that they actually have a Milwaukee right-angle drill in the van which they don’t use that often, mentioning that the batteries didn’t last long. One of their biggest complaints was that when the drill snagged and got stuck, it didn’t have enough power to back the bit out. They were super impressed that the reverse had enough power to back itself out of any situation without them having to get a wrench and waste time pulling it out by hand. 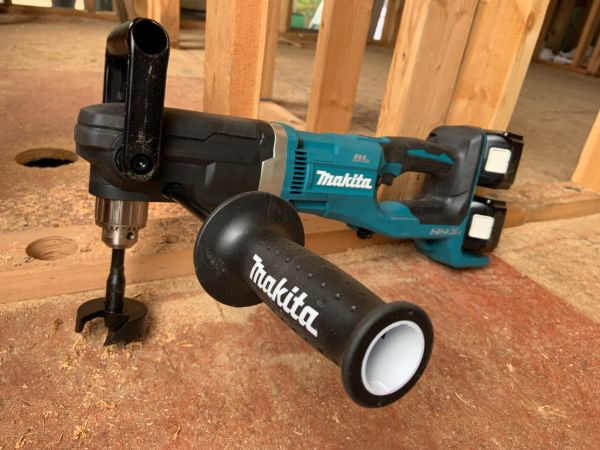 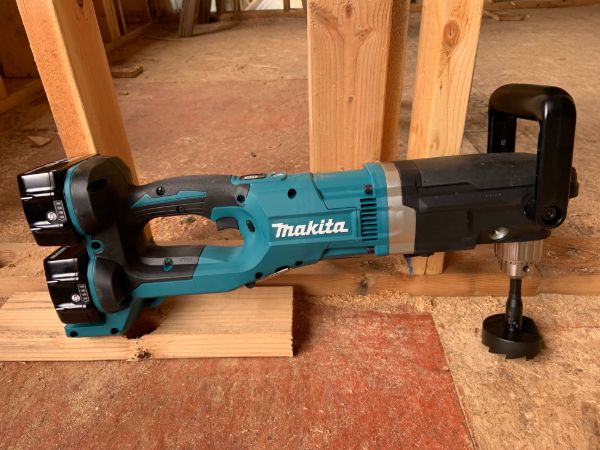 The Makita XAD03PT comes in a bag. I’m always a big fan of the bags because they are very roomy and I usually end up using them to carry a bunch of tools into the job. 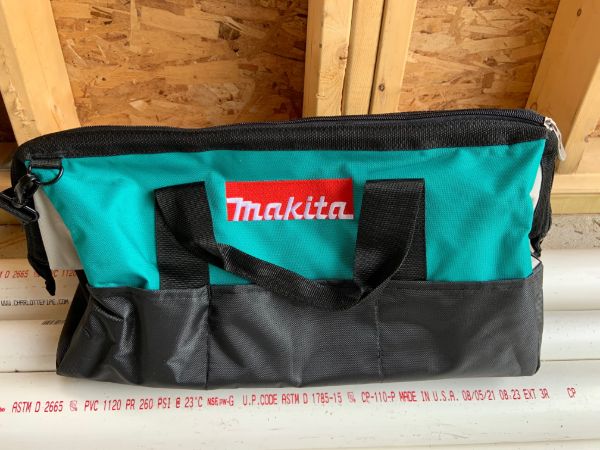 The Makita XAD03PT is a big power tool with an adjustable heavy-duty handle and a soft rubber push grip. Having a strong handle is nice because you don’t feel like it will break when you have to put some muscle into the hole you are drilling. In addition, at times I will put my hand on the soft rubber pad and push with my palm, which is comfortable when applying some pressure.  The handle can come off easily if you need to reduce size for tighter areas. 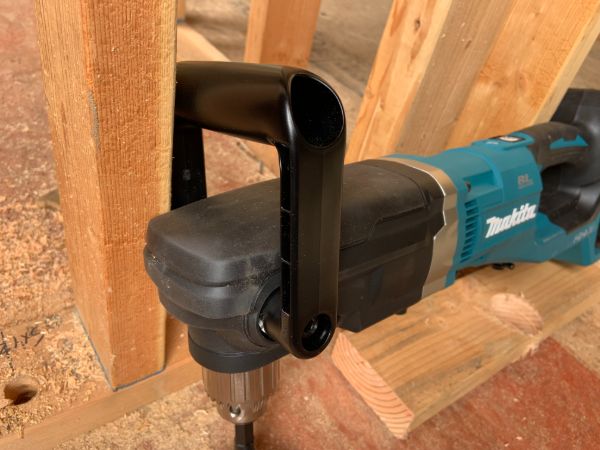 The Makita XAD03PT features a quality key chuck with a metal internal gear housing. This all-metal construction provides for extended durability over the life of the tool. Given the amount of torque the Makita is capable of putting out, I am glad to have such a rugged chuck to secure the bits. 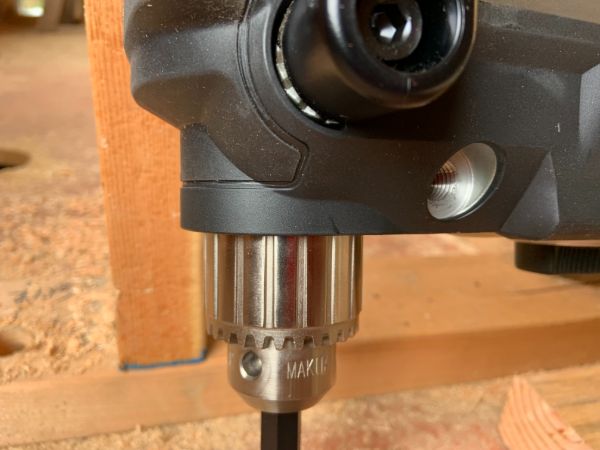 An on/off switch is a great feature. When you have this much power you don’t want the trigger to get accidentally pulled. The on/off button will prevent job site/toolbox accidents. 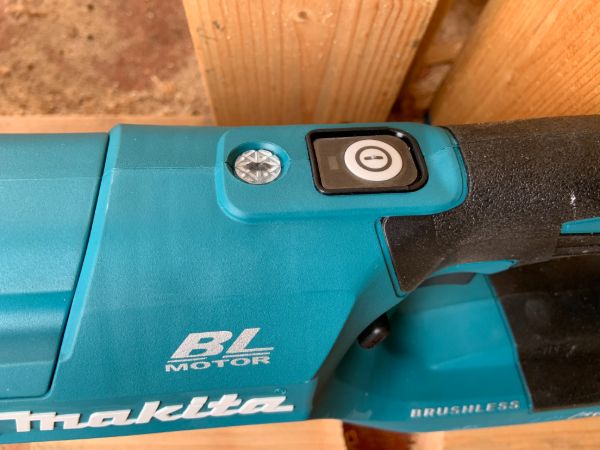 As previously mentioned, everyone gets excited when they see the dual batteries.  Once they see the batteries the first thing that asks is about the battery life. With two 5.0 batteries, The Makita XAD03PT will last a long time. I personally drilled hundreds of holes in many different sizes and was more than satisfied with the battery life.  Now with that being said, this drill isn’t going to last you an entire day of drilling, but it will put a good dent in it. We still needed the generator to charge up the backup batteries for the second half of the day, depending on how many holes we drilled. The general consensus was that not having to run extension cords all over the house was very beneficial. Two 5.0 batteries are included with the kit. 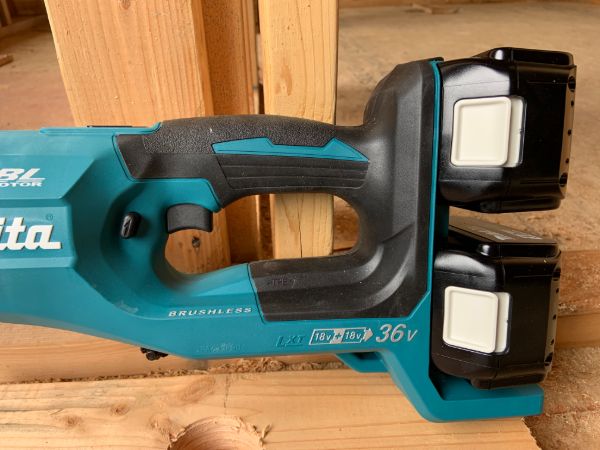 Again, the Makita XAD03PT drill is rated for up to 6 1/4 hole saws or 4 5/8″ self-feed bits. This drill did not even flinch at anything I threw at it. This drill is a powerhouse, and the extended support handle is included with the kit. I don’t always use the handle but it definitely is a must-have for a drill with this kind of power. 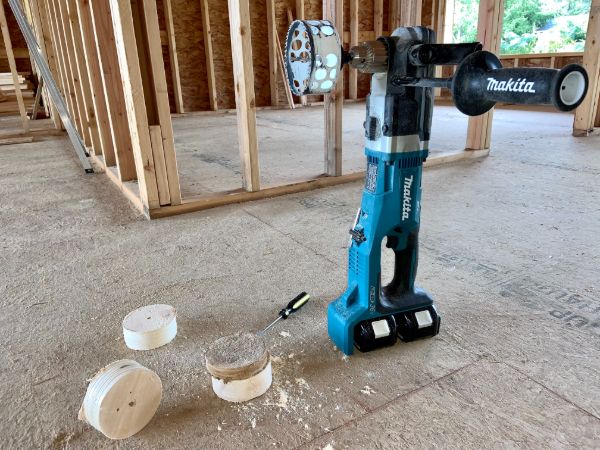 Under the drill, you can find a built-in key holder and variable 2-speed switch. Gear 1 will give you a steady 0-350 RPM while gear 2 allows 0-1,400 RPM. Near the key is the twin led light which is angled perfectly towards the drilling area and always comes in handy for those darker areas 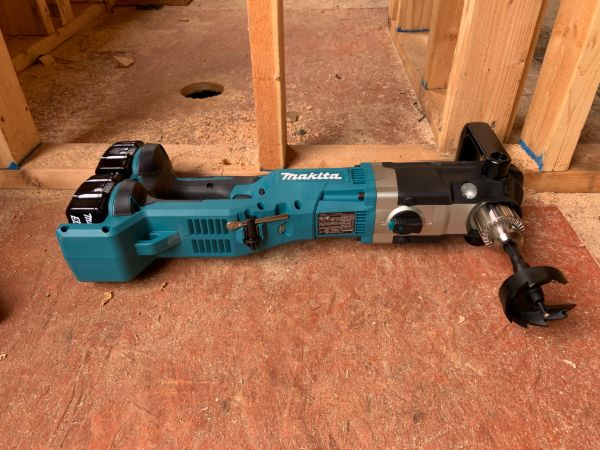 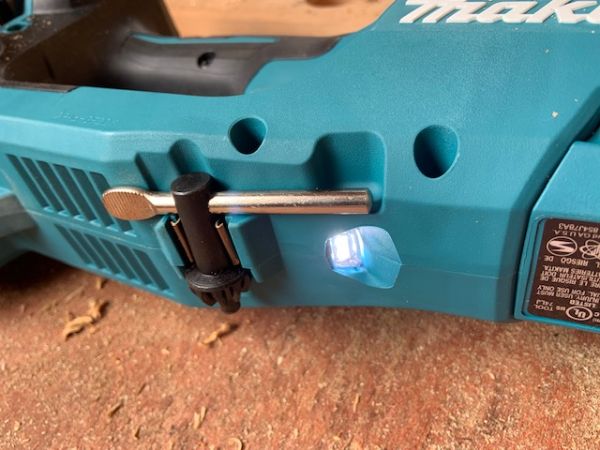 Yes, both of the right-angle drills stand up on the battery. I like that they stand up because you aren’t always laying the drill on its side. I also find that it is really comfortable to kneel down and change the bit while the drill is standing up. 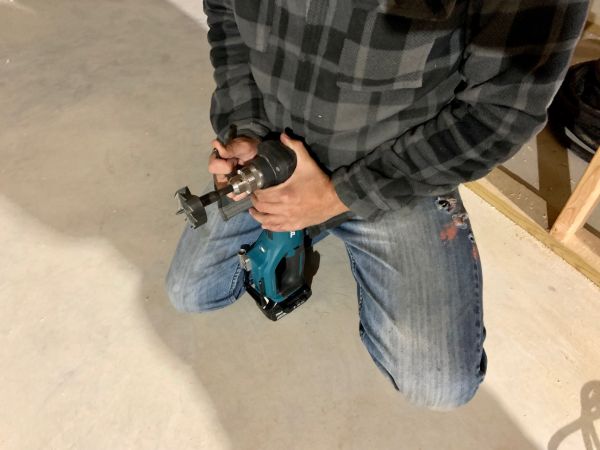 Makita XAD03PT also includes a dual battery quick charger. Having a charger handy that quickly charges two batteries is a win. You won’t just use the dual charger when using the Makita XAD03PT, you will use it for all of your tools, all of the time. The quick charger also has a built-in USB port that is perfect for charging your phone on the job site. If a charger nowadays doesn’t have a USB plug, it’s a negative when purchasing the tool because it simply makes working easier. 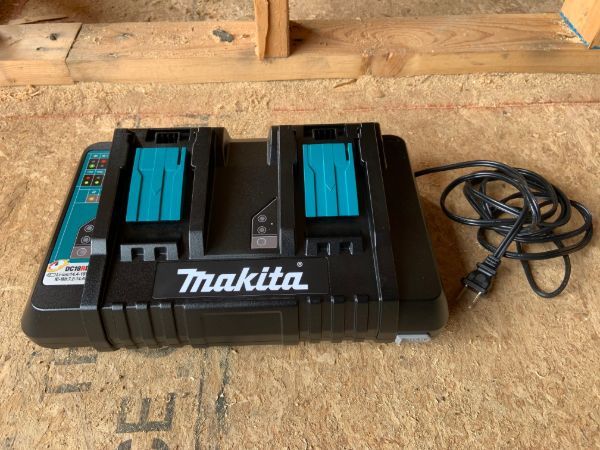 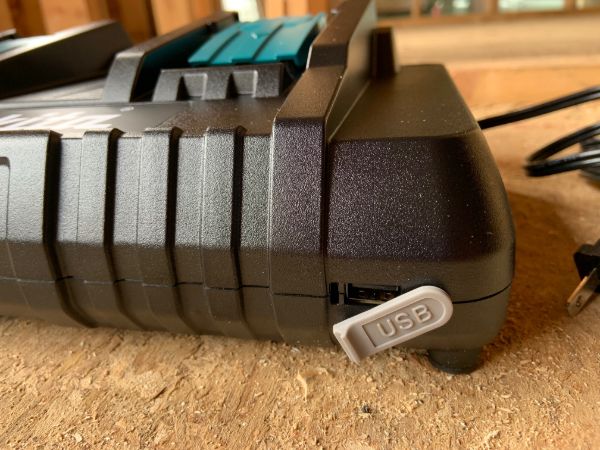 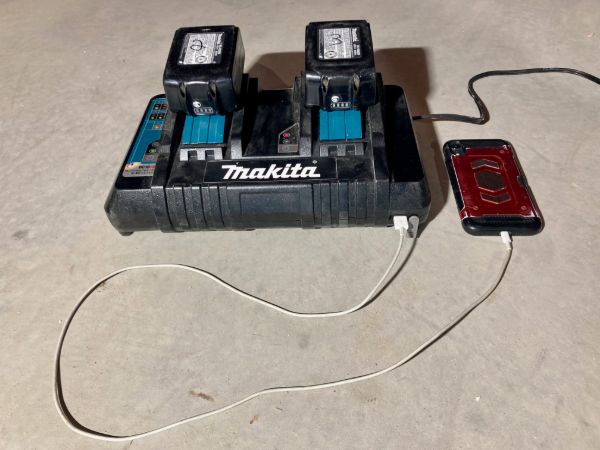 This is not a head-to-head comparison. I did not use and I have never used a battery-powered Milwaukee Hole Hawg or Super Hawg. I can tell you co-workers who have them are not impressed with the battery life or reverse power. The Makita XAD03PT received many compliments regarding its battery life and its power. There was a lot of praise for the Makita XAD03PT’s reverse power. Testers were impressed that it was able to back itself out of almost any situation and stated that they would normally have to get a wrench and take it out by hand. The Makita XAD03PT  is also slightly shorter and lighter. 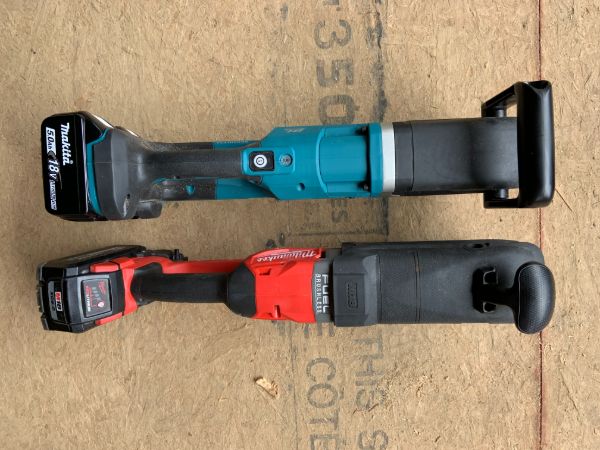 I have nothing but good things to say about this tool, as does everyone who used it. The only thing I can say is that I and one other guy accidentally hit the power button and shut off the drill while we were drilling overhead holes that required a little extra force. In the picture below you can see my palm just pushing on that power button. We each did this once and learned not to do it again. I would say this is not really a big deal. Speaking of room for improvement, how about the name? Milwaukee has a Hole Hawg and a Super Hawg, which are both pretty cool names. I mean they could have named it the Wood Beast because that’s what it is. 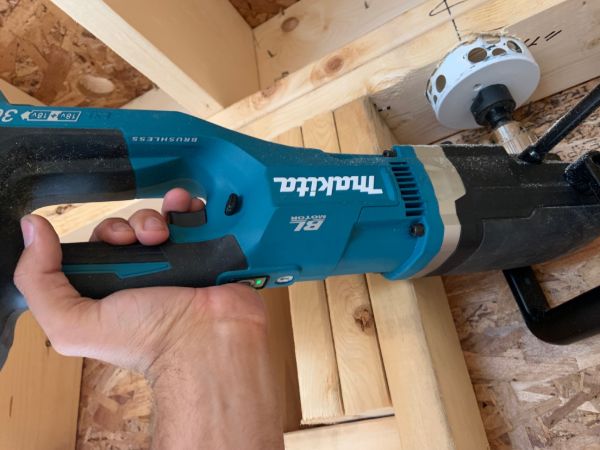 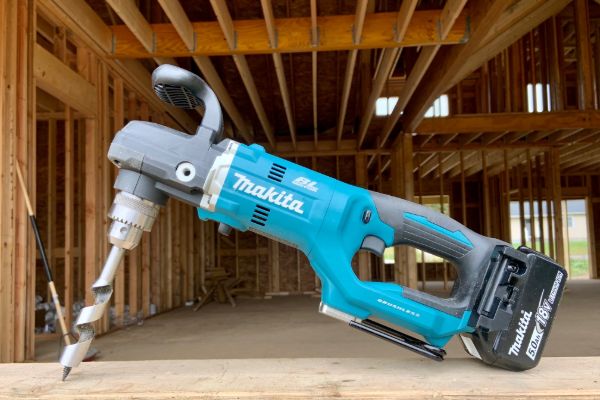 The Makita XAD05Z (18v) may be the more compact little brother but it is certainly no wimp. It’s almost as if they jammed all the features and power from the 36v drill into this model. This more compact drill packs with plenty of power with excellent run times. The Makita XAD05Z (18v) is equipped with a brushless two-speed, variable-speed motor ranging from 0-450 RPM in gear 1 and 0-1,400 RPM in gear 2 while weighing in at only 7.6 lbs. 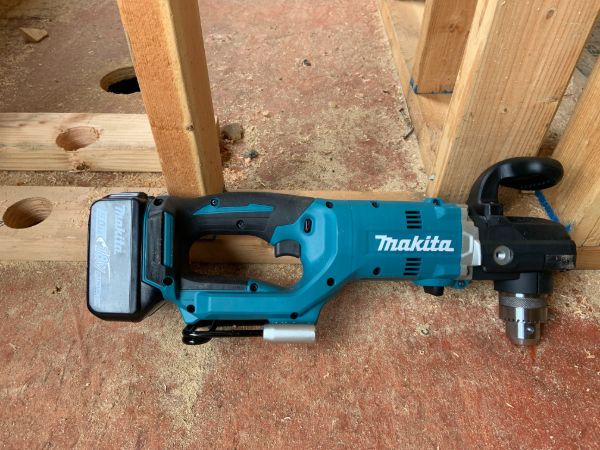 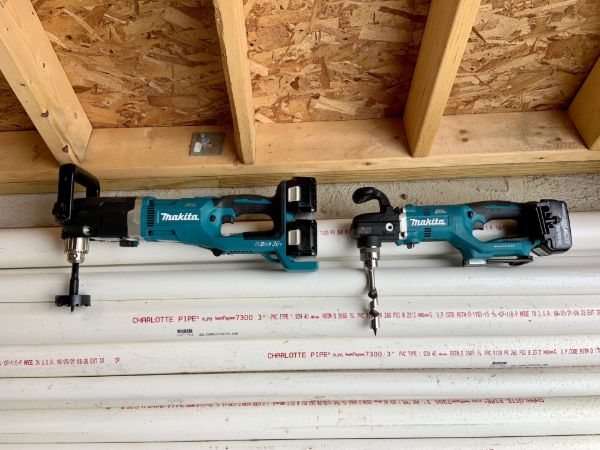 Due to its compact size, this Makita XAD05Z drill comes with a retractable tool hook. Like I mentioned before this is my go-to drill for tight spaces and when up high due to its light overall weight. When you are on the top of a ladder or balancing on a couple of joists, lightweight is king. Additionally, the LED light to light up your working area helps assist you to get that hole exactly where you want it drilled. 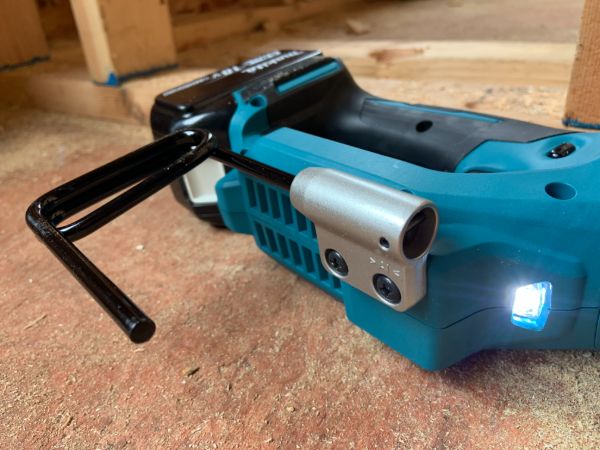 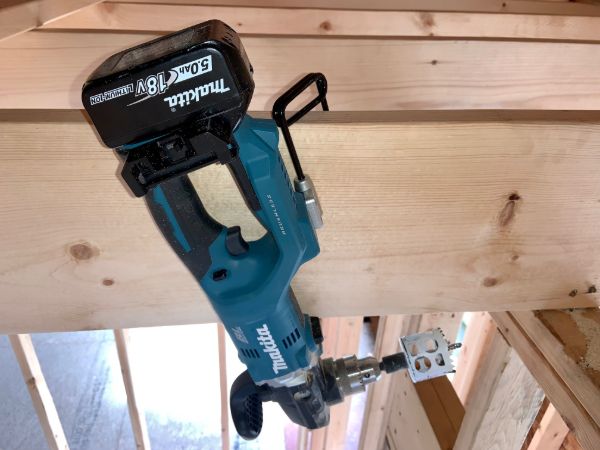 The Makita XAD05Z is Light and Compact 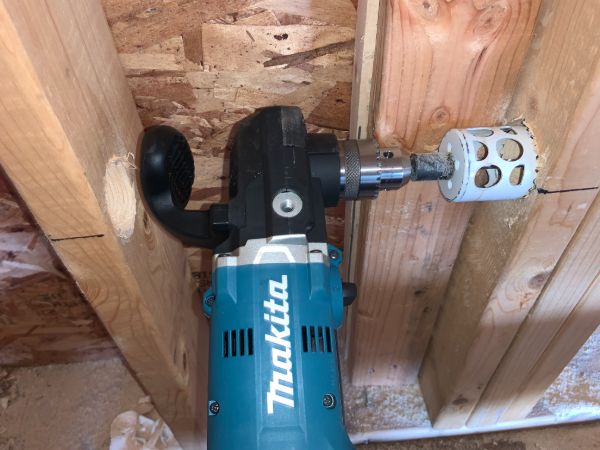 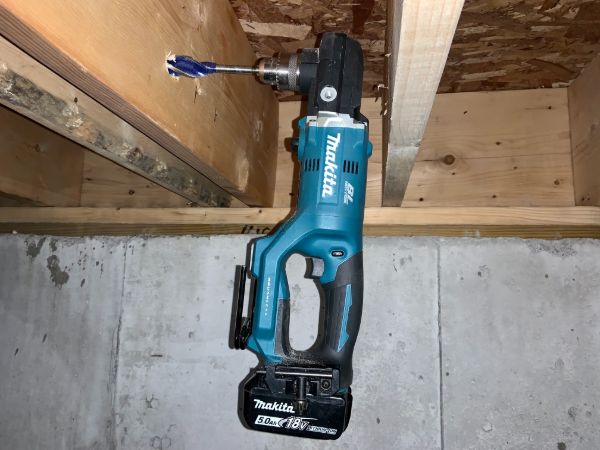 I highly recommend having both right-angle drills because there is nothing like having the right tool at the right time. The Makita XAD03PT (36V) is an absolute beast. It’s big, it’s bulky and it rips through anything in its way.  I used the big boy often when drilling on the floor, wall studs and when drilling the ceiling joists when I just wanted the pure power.

The Makita XAD05Z (18v) may be more compact, but still had plenty of power. I used this one more often when on a ladder, in a higher position, or when in a tight spot. Being able to take the handle off allowed me to reduce the drill size and saved me tons of time by allowing me to fit into those tight spaces that normally would have required extensions and extra time. Both drills allow me to work more efficiently, quickly, and easily.

You can buy The Makita XAD03PT (36V) Right angle drill as a kit for $479.00 from some of our preferred online retailers. I think that $479.00 is an excellent price for this drill as a kit. The drill is worth every penny, but having the two 18 Volt LXT® 5.0Ah batteries, dual port rapid charger, side handle, chuck key, and bag make this a really nice kit. The Makita XAD05Z (18v) can be purchased for $249.00 and is also well worth the price tag as this compact drill save you lots of time and headaches in tighter spaces.

Follow the Buy Now link below to purchase either the XAD03PT or the XAD05Z tools from our friends at Ohio Power Tool or ACME Tools.

Pictured in several photographs and below is the Makita 2-9/16″ self-feed bit which is a monster in addition to the 7/8″ x 6″ Ship Auger Bit. Both bits are super sharp and assist the drill in just eating through wood. 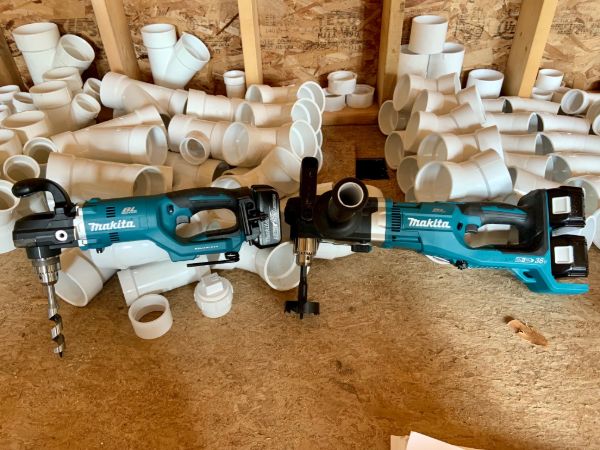 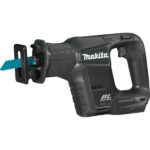 Dan is the ultimate believer in “if you want something done right, you do it yourself.” He is currently working as a General Contractor building a series of custom farmhouses. Dan doesn’t just oversee the projects; he is always on-site, slinging nail guns and making sure that the homes are built with quality craftsmanship. Besides his background in construction, Dan is also an automotive restoration specialist and all-around car nut. He enjoys restoring cars to showroom quality with a twist of custom modernization. He recently has restored a 1977 Jeep CJ7, a 1979 Jeep CJ7, a 1985 Corvette C4, and a 1988 Mustang 5.0. From an early age, Dan has had an inerrant ability to understand all things mechanical. This led him to have a lifelong passion for cars and trucks as well as for dirt bikes and motorcycles. He truly understands how things work, which allows Dan to rebuild and repair many different mechanical systems. Dan strongly believes in getting the job done right, and using the correct tool in that process helps ensure the job gets done quickly and accurately.

All posts by Dan »