Hilti has always enjoyed a long reach into the commercial interior finished industry. Until now they have suffered a product gap with drywall cutout tools. The new Hilti 22V Cut Out Tool SCO 6-A22 was designed to fill that gap, as well as, give corded performance with cordless productivity. The Hilti 22V Cut Out Tool SCO 6-A22, arrived after two years in the making. Interior finish contractors have been asking for this! The Hilti 22V Cut Out Tool was designed with two goals: The Hilti 22V Cut Out Tool weighs 4.2 lbs and has an electric brake. Some people may scoff at the Hilti’s battery angle, because they can’t stand the tool on its battery.

The real reason for the angle is to better distribute the tools weight towards its center, which created a better balanced tool. A straight battery design tends to put the weight closer to the tools handle, and on a horizontal cut will create an off-balance, pulling effect.

Hilti purposely utilized a integrated dead-man paddle trigger switch to turn the tool off when dropped. The idea behind this design is the tool cannot be locked on. If the tool is dropped or slips out of the users hand, its electric brake will stop the cutter from spinning.

The body style of the Hilti is similar to that of a grinder. According to Hilti their field research came back that users preferred this body style and paddle switch design for long use comfort.

Let’s face it we all respect tools that are trustworthy and perform consistently well. But the reality with drywall cutout tools is that they are a dusty application tool. So dusty, that most corded tools have an expected lifetime of 6-months.

Hilti’s most ambitious challenge was to create a cut-out tool that would last at least 2-years in this dusty environment. The 2-year mark fits with their organizational 2-year warranty.

Hilti achieved this robust longevity by working their design to direct dust away from the tools brushless motor.  The brushless motor and electronics are all sealed and a large heat sink keeps the tool running cooler.

Hilti also wanted to create a cut-out tool that was more powerful than the most commonly corded cut-out tool. [think Roto-Zip] The new Hilti 22V Cut Out Tool will cut through denser materials like soundboard and doubled up wall board.

Admittedly I did not notice the difference between using my corded cut-out too and the Hilti until I swapped out the bit and used a 5/32” and ¼” bit. Larger bits tend to bog down, when pushed too hard, the Hilti did not bog down, and was smoother cutting.

To me the win here is you can move faster without snapping your bit when cutting out doors and windows.

Note: 1/8” bits are still the most commonly sold and probably used. Hilti told us that they tested the SCO 6-A were able to run through ½” drywall and was able to achieve 146 linear feet of cutting with the 22 volt compact battery (2.6 Ah).

One thing I noticed was when moving counter clockwise the dust moves away from the tool [users face] instead of shooting back at you. While I’m not sure if Hilti intended this, it’s certainly a nice consequence in their design.

This tool features two bright LEDs positioned around the front of the tool which really lit up the cutting area well.

The B-22 batteries are compatible with both Hilti 18V and 22V cordless tools which means you don’t have to replace your cordless line up.

Hilti designed these new batteries to give you more work per charge and di it without changing the size, weight or price compared to Hilti’s 18V batteries. The only improvement I can offer is that the collet should be roles. currently you need a wrench to change the bit.

The kit comes with:

When you consider that the Hilti is designed to last 2-years while the corded version last approx. 6 months, the Hilti is slightly cheaper, and is more convenient to use. If you buy into my theory, you will go through 4-corded tools vs. the one Hilti tool. The jury is still out on whether Hilti 22V Cut Out Tool will achieve their ambitious minimum 2-year longevity goal. What is certain is one that the Hilti cordless cut-out tool is durable, powerful and surprisingly quieter than expected. 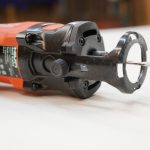 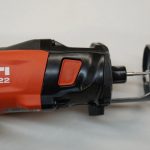 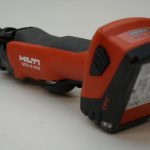 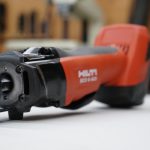 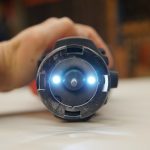 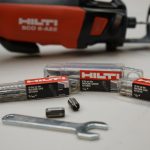