November 1, 2013
By Todd Fratzel on Drill/Driver

When I saw this new tool at the DEWALT Media Event I was fascinated yet skeptical about it at the same time. My skepticism has changed to excitement about a tool that’s extremely innovative and useful. The all new DCF680N is a cordless screwdriver that’s controlled with gyroscopic technology. Sounds complicated huh? Well it’s not that complicated, in fact it’s quite simple. By twisting your wrist (as if you were using a screwdriver) the motor turns in the direction you’ve twisted. Twist it the other way and the motor spins the other direction. To control speed you simply twist further and it speeds up.

Needless to say this new cordless tool has some serious WOW factor. While it might WOW your co-workers the fact is it’s extremely effective and useful. Read on to find out what I think about and what a Sears Repair technician thought when I let him borrow it on a repair job.

Gentle Precision and Power In One Unit

Clearly this isn’t the first cordless screwdriver on the market. And it’s not the first gyroscopic screwdriver either. Black & Decker has one on the market but there’s a huge difference in the two screwdrivers. As you would expect DEWALT’s is a PRO grade tool designed specifically for tradesmen. Still not convinced? Well think about all the trades that spend hours every day installing and removing machine screws. People like electricians, HVAC technicians, appliance repairmen, the list is long so I won’t try to list them all. These people either use a regular screwdriver or they use some sort of cordless drill or screwdriver.

To help you understand how this cool new tool works take a minute to watch the following video I made. After that I’ll go into more specifics about the tool itself.

As you can see the operation of the DEWALT Gyroscopic Screwdriver is very intuitive and easy. It’s also VERY delicate in the sense that you can vary the speed ever so slightly by adjusting the amount of twist.

Just like a cordless drill, the DCF680N has torque settings so you can control the amount of power. This is really great when you want to install delicate items like plastic switch plate covers. If you need more power to unscrew a rusted fastener you can simply dial up the torque. The range in power makes it very versatile depending on the application.

This screwdriver maxes out around 40 in-lbs of torque which isn’t huge but it’s more than enough for most “screwdriver” applications. If you need more power than that then a tool like their 12V drill would be a better application.

The DCF680N uses a 2-axis gyroscope. This is really cool because it allows the screwdriver to operate in any position. It works in the horizontal position and also in vertical positions. Regardless of position it is able to distinguish a twist to the right or left and turn the motor in that direction.

The DCF680N also have a very bright LED ring around the front of the drill. It uses two LED’s which is nice because it casts light all around the bit reducing shadows.

I’m sure there are those of you that will groan at a new battery platform from DEWALT. However, I’m more excited about this new battery than I am the tool. Why you ask? Well it’s a very small pack that will ultimately lead to other small cordless tools. The new battery pack is about the size of a Canon battery pack and the charger is quite a bit smaller than the other chargers for obvious reasons. The battery charges in just under an hour.

The screwdriver also includes a nice LED battery life indicator on the top surface so you can easily see it. Recently I had a Sears Repairman at the house to repair our microwave oven. The repair involved taking down the microwave and taking the housing off. After that he had to remove dozens of screws and parts to get to the part that needed to be replaced. I figured it was a great opportunity to get another point of view on the new tool.

The guy was using an old Craftsman drill driver to remove the screws. I handed him the new DEWALT DCF680N and he looked at me with some apprehension. After about 5 mins he wanted to know where he could buy one. He loved how easy it was to control, how well it fit into tight spaces and also the LED light. When I asked if he thought it was worth $100 he said absolutely yes. Needless to say I think he was going home to order one online!

You won’t be driving drywall screws all day with the DCF680N however it sure does make short work of small screws and delicate fasteners. At first the gyro action is awkward, however after just a few minutes playing with it I found myself able to control it with very fine movements. When you combine the fine motor control, torque control, long run time and LED light this is a great value. If you use a screwdriver all the time then this is a tool that you would find very useful and one I recommend. 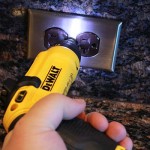 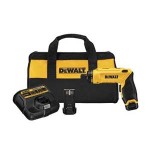 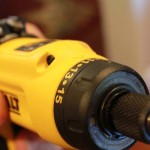 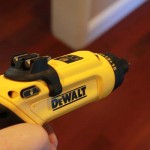 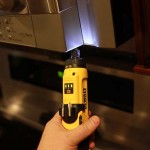 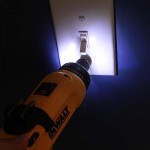 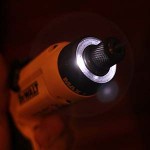 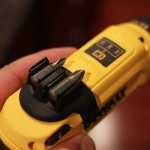 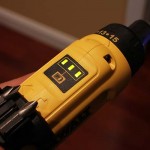 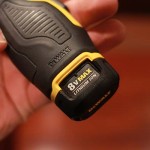 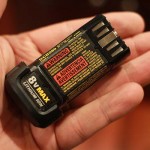 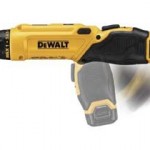