Weight: 3.54 Lbs (bare tool)
A hammer drill (AKA percussion or impact drill) is an essential tool for drilling into hardened materials such as concrete, brick, or stone.  It is also a tool rich in history. Versions of the hammer drill were used as far back as the 3rd century by the Han Dynasty in ancient China.  Their version consisted of connected bamboo shoots with cast-iron tips and required six men to operate (by jumping on a level).  While not quite as good of a workout, I think even Ming Dynasty carpenters would fall in love with the DEWALT DCD999B Hammer Drill/Driver. I know, after using it to drill a couple of dozen holes in a recently poured concrete floor, it didn’t take me long to declare this tool a new shop staple! 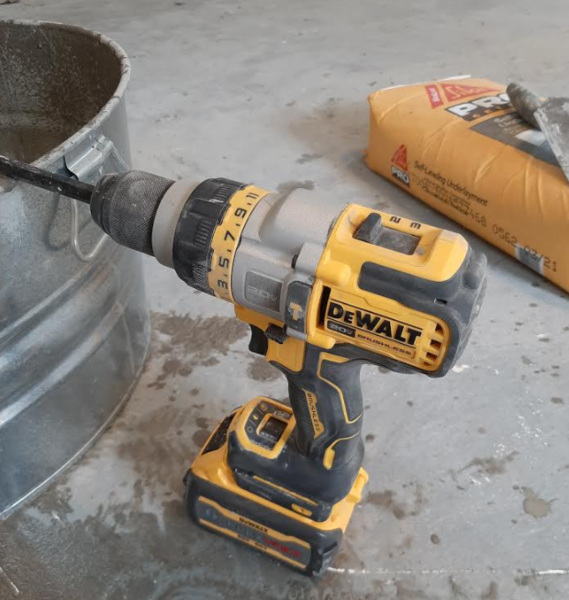 For the first test of power, I drilled 30 total 1/4″ diameter, 4” deep holes into 3500 PSI concrete.  Not only did the drill maintain a consistent torque and drill speed throughout the operation, but I found that I was able to maintain consistent pressure throughout the drilling while maintaining a consistent drill speed.  (I followed my usual practice of backing the drill bit out halfway through drilling to help clear the hole/flutes).  The performance remained the same (pressure/bit speed/hole bore speed) from the first to the last hole I drilled.  I maintained about 15-20 seconds of rest time between holes.  I used both power setting 2 and 3 and was pleasantly surprised that in power setting 2 I was still able to easily drill the required holes, although I did notice some bit slow down and motor strain for the last 1” or so. 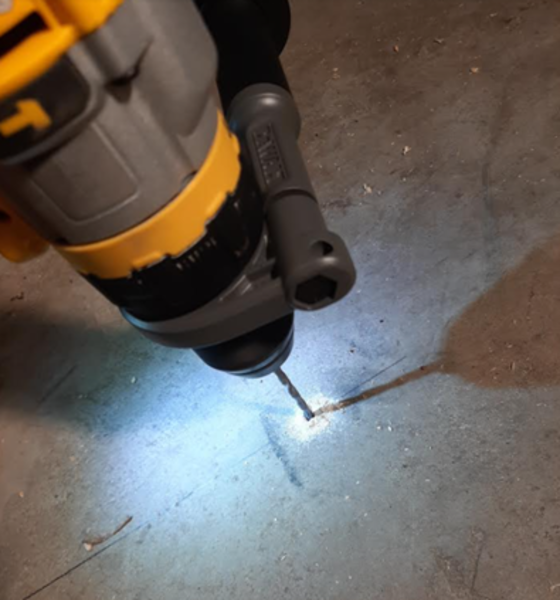 First, it is worth noting that this hammer drill doesn’t have an integrated kickback safety feature when in the drill or hammer drill modes.  So the risk of sudden torque twists still exists.  When drilling through tough surfaces, especially hammer drilling, I am always leery about torque-related risks.  (I’ve caught a drill bit too many times on steel or concrete and had a sore wrist for a few days.  The DCD999B does feature a variable speed trigger for additional torque control.  This means that the more fully you depress the trigger the higher the speed the tool operates at.  The responsiveness and sensitivity of the variable speed trigger made it very easy to ramp up the drill speed as required.

Additionally, while all drills will heat up during extended drilling operations (especially hammer drilling), the DCD999B seemed reasonably cool during operation.  I wasn’t worried about thermal overload or the battery overheating.  The additional power did seem to reduce bit stoppages during operations though. The DEWALT DCD999B hammer drill/driver employs DEWALTS’s industry-standard Electronic Protection System (EPS) which will shut the tool off in cases of potentially dangerous battery overheating or overdraw due to extended usage. 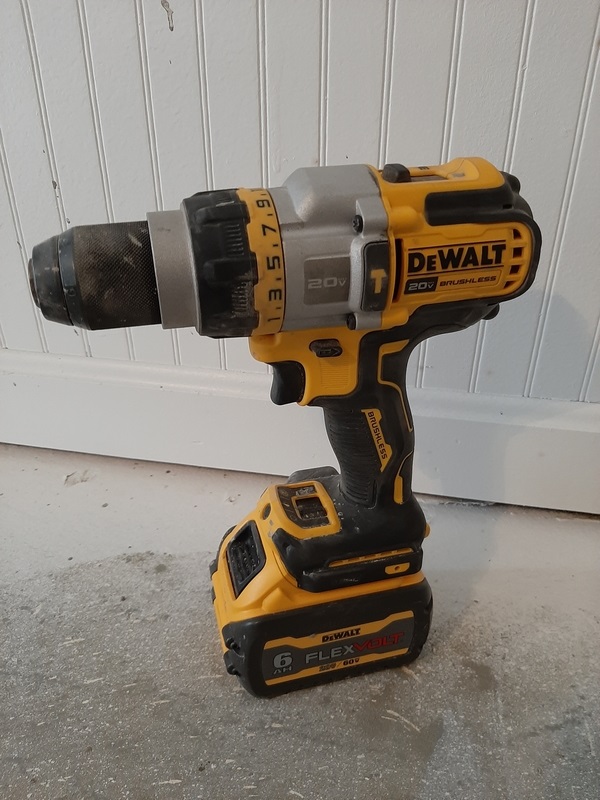 The pistol grip is great.  It has the same non-slip and formed design I have come to love on my other DEWALT cordless tools.  Additionally, I found the checkering, non-slip etching pattern on the keyless chuck to be more comfortable than etching on other chucks I’ve used.  And it still maintained a great non-slip grip.  The weight was well-balanced when paired with my 6Ah battery.  When I used my 2aH battery it was a bit top-heavy but that was expected.  When the handle is mounted any slight weight imbalance becomes a non-factor as the dual point hold eliminates this concern.  Also, with the auxiliary handle, the extra weight of the larger battery was a positive as it offered more stability and natural pressure when drilling.

Lastly, the location of the speed, mode, and light switches are placed in easy-to-reach locations where I could still single-handedly hold the drill and change any setting required.  The switches were a bit stiff. With additional break-in, I’m confident they would slide smoothly yet firmly. 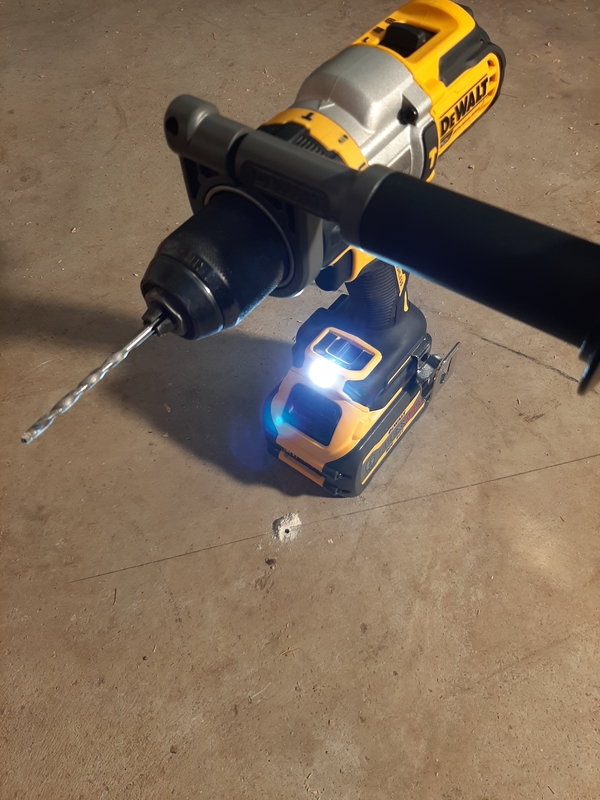 It has a light.  My other tools have lights.  So all things must be equal, right?  Wrong!  The variable light settings are invaluable, while the 20-minute timer on the high setting is great.  It limited my need to have a separate work light when drilling in the back corner of the room.  The 3-LED light is located on the front and center of the base, just above the battery.  It is quite bright and angled well to provide light when operating the DEWALT DCD999B.  The only consideration I had is that when placed on flat ground, the light beam center is angled up approximately 15-20 degrees (so it may not illuminate the ground as much as desired).  I did appreciate that the light also serves as a battery low indicator; When in spotlight (high) mode, the light will blink twice and then dim to let you know the battery is almost dead. 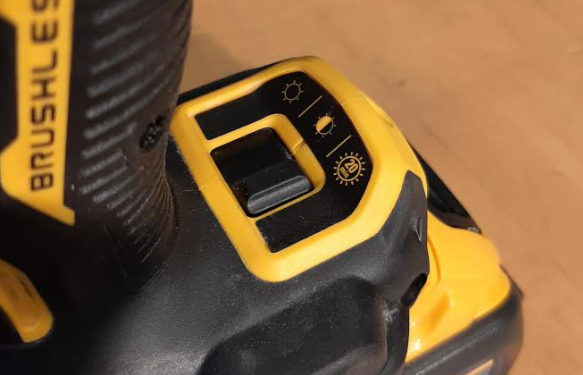 The auxiliary handle is sturdy and rotates a full 360 degrees for left or right-handed users.  It also features a standard, tool-free tightening mechanism which quickly loosens the handle for easy mid-job, one-handed removal as required. The attachment collar secures just behind the keyless chuck on a portion of the DCD999B’s aluminum gearbox. The auxiliary handle is 11 ¾” in overall length with 4 ½” of grip width giving it ample width for wider-handed users. 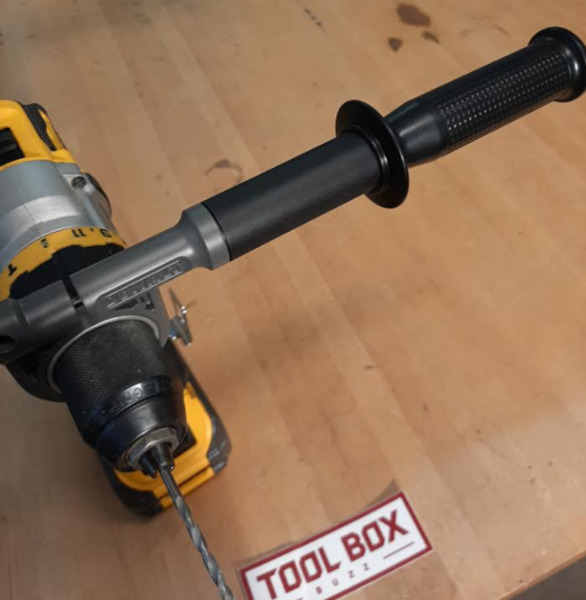 The DEWALT DCD999B combines a 3-speed transmission with 11 clutch settings for a total of 33 clutch operation modes.  Speed 1 is a low speed/high torque setting while speed 3 is the high speed/low torque option.  Simply put, any drilling task can be task optimized!  I tested out the clutch settings when lag bolting some headers into place.  When using the clutch settings, it was extremely easy to step them up to the perfect balance of speed and torque so I didn’t accidentally bury the hex head into the beam.  Combine the speed and torque settings with the variable sped trigger already mentioned and you have a near-limitless option of speed/torque ranges.

The drill can be set to operate in 3 modes:

The standard drill-on-clutch mode engages the clutch at a pre-defined torque point.  There are 11 clutch engagement settings, with the user rotating the mode ring to dial in the right amount of torque.  This allows for a reduction of the chances of over-torquing or driving a fastener into a workpiece.

Drill and hammer-drill modes have no clutch limit.  The difference between these modes is that the standard drill mode has no up-and-down percussion movement like the hammer-drill mode.  The up to 38,250 blows per minute (BPM) make for an unnoticeable and smooth hammer-drill operation.  As with all hammer drills, bit walking occurred on smooth surfaces.  But using a pilot hole or center punch fixed the bit walking with no problems.

Battery runtime was excellent on the DCD999B.  After drilling 30 total ¼” holes at 4” depth in 3500 PSI concrete, I still had 2/3 bars left on the battery (51-74% charged). I also used the drill to mix 600 lbs of floor leveling concrete and the battery only used a single bar!  Each of the six batches was mixed for approximately 4-5 mins on power level 3 in drill mode without any noticeable pauses or stops in operation.  That is some impressive runtime without a sacrifice in performance. 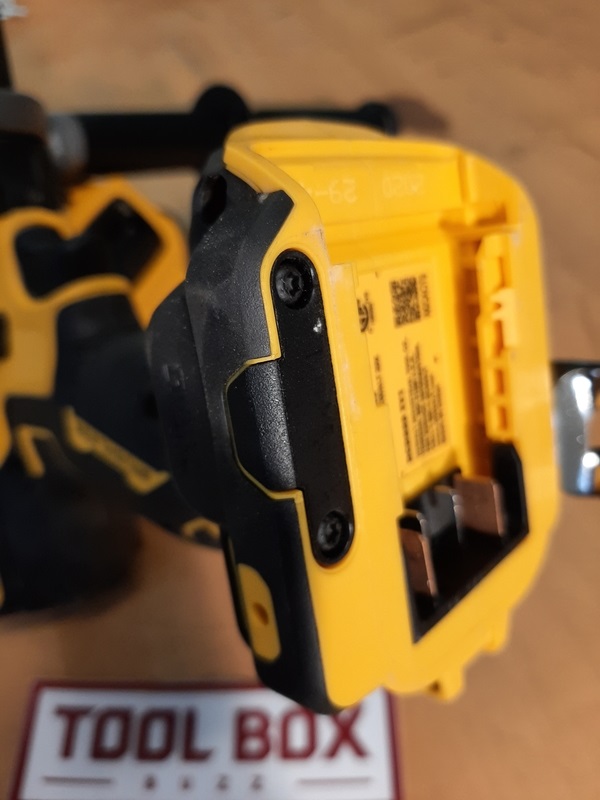 I was unable to test the Tool Connect Chip optional feature as a chip did not come with the tool I received.  For those who already own a  Tool Connect Chip (or a desire to safeguard tools at a job site), this feature enables the user to track, manage and locate tools misplaced on a job site using a smart device.  The chip is mounted in a screwed in receiver port in the base of the tool.

Overall, I was very pleased with the DEWALT DCD999B’s great balance of power, runtime, and ergonomics. My only recommendation would be for DEWALT to add in an anti-kickback feature in future versions of the tool. Even without it, the variable mode and speed settings, easily positionable auxiliary handle, and great LED work light make this a full-feature powerhouse you’ll immediately depend on for the toughest of drilling jobs!