Let’s say you show up to a job site in the morning to start a large interior renovation project.  One of the first things that needs to get setup is that heavy, bulky, and noisy air compressor, along with all those hoses that cause tripping hazards and always seem to be tangled up with something.  Now imagine that same project getting done with no compressor.

Dewalt has recently expanded their cordless nail gun line with the addition of an 18G brad nailer, crown stapler, and flooring stapler.  When Dewalt offered us the opportunity to take the new 20V Max DCN681 XR Brushless 18 GA Cordless Narrow Crown Stapler out to our job site, we just couldn’t resist.

When I first grabbed the Dewalt 20v 18G Narrow Crown Stapler I thought it was a little bulky and top heavy.  After using it for awhile, I noticed that although this is true, it didn’t really cause any extra fatigue.  It sits great in your hand and is actually well balanced when it has a battery pack in it.  The housing is an all plastic design with rubber molded edges for protection. Cordless nailers in the past often required some form of a gas cartridge for power.  One of the biggest problems with these nailers is the required cleaning and maintenance to keep them operating well.  Most carpenters are just to busy to take the time to keep up on them, often resulting in nail gun failure.  The Dewalt DCN681 not only cuts the compressor and hose, but it cuts out the use of gas as well.  It operates on solely battery power, eliminating that pesky extra maintenance.

Performance on the Job Site

One of the projects I used the Dewalt DCN681 for was to install sidewall shingles on a dormer that was along a 12 pitch roof.  The fact that we were able to cut out the hose while working on staging is awesome.  No worries of any extra tripping hazards.

Another project I used it for was to build a couple of built- in cabinets.  I used the Dewalt 18G Narrow Crown Stapler to fasten the back of the cabinets together.  I placed it in sequential fire mode and was easily able to fasten the plywood on with no issues.

One of the biggest questions we get about these cordless nailers is can they keep up with a pneumatic gun?  In my opinion, yes it can, depending on the circumstances. There wasn’t a single time where I felt like the Dewalt DCN681 couldn’t keep up with my pace.

The contact firing mode or “bump fire” is great for fast paced fastening.  However, I can see a situation where maybe it is being used to staple down flooring underlayment.  In that situation, I’m not sure that it would compete with a pneumatic gun. As with all of Dewalt’s tools, the Dewalt 20V Brushless 18G Narrow Crown Stapler features that amazing rubber molded grip that feels great in your hands.  In my opinion, Dewalt has the most comfortable tool grip on the market.

Dewalt placed the depth adjuster on the right side of the gun.  I really liked how it is larger than most guns making it easier to adjust, especially with a gloved hand.  There is a large adjustable belt hook that can be swapped to either side for user preference.  The release to open the magazine is also perfectly sized and easy to release, making reloading quick and efficient.

The Dewalt DCN 681 has a weight of 5.7Lbs.  The gun does feel a little top heavy.  With that being said, I personally didn’t find it to be an issue during prolonged use. One of the first things I noticed was the two LED lights.  They are set down at the base of the gun just above the battery pack.  There is one on each side.  There is a small amount of shadowing noticeable around the tip of the gun but they do light up the work area well in low light situations. The Dewalt 20V Brushless 18G Narrow Crown Stapler features a firing mode selector located at the base of the gun between the grip and the magazine.  This switch selects between sequential firing mode and contact firing mode.  I found the switch to be very tough to move.  Even after using the tool for awhile, it didn’t seem to loosen up at all.

The DCN681 has a narrow tip making it super easy for fastener placement.  Two spare tips are also attached to the side of the gun near the depth adjuster.

It has a bottom loading magazine making it easy for reloading or clearing jammed fasteners.  The release on the magazine is spring loaded which is great for quick and efficient reloading.

Located on the top of the gun is a release that quickly resets the driving blade in the event of a jammed fastener.  This is an awesome tool free design that will get you back to production quicker. You can purchase the Dewalt 20V Max Brushless 18G Narrow Crown Stapler as a bare tool or a kit. The kit includes 1 2.0aH 20V Battery, 1 Charger, and 1 Kit Bag.

I am going to give the Dewalt DCN681 18G Narrow Crown Stapler 4 out of 5 stars.  It is a well operating gun that performed every task we put to it flawlessly.  I would like to see Dewalt take a look at the firing mode selector switch and make that operate a little easier.  I am very impressed with the speed it is capable of firing staples at.  It has definitely found a home in our truck for good.

The Dewalt 18G Cordless Narrow Crown Stapler is an addition to Dewalt’s expanding cordless nailer line.  To take a look at another cordless finish gun, check out Rob’s review on the Cordless 15G Angled Finish Nailer.  Dewalt has done an amazing job at expanding their 20V Max line and we can’t wait to see what’s next. 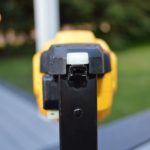 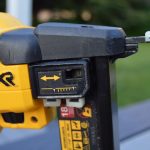 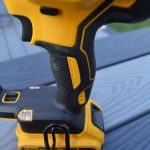 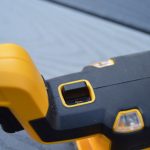 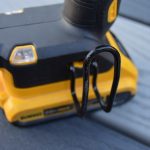 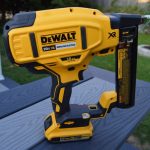 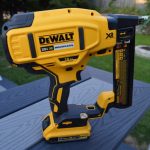 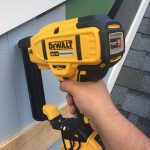 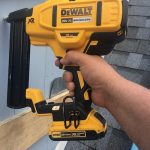 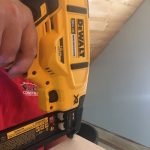 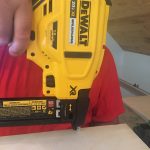 Mike Valente is the owner of Valente Construction, a residential construction company based in RI. He got his first taste of the trade when he was still in elementary school. Mike would tag along with his Dad fixing up their rental properties. He attended H.H. Ellis Tech as a major in carpentry. After graduation he worked for a few years as an apprentice at a small residential remodeling company, before setting out to start his own company. Mike is always looking for new advancements in the trade, including new products and tools.