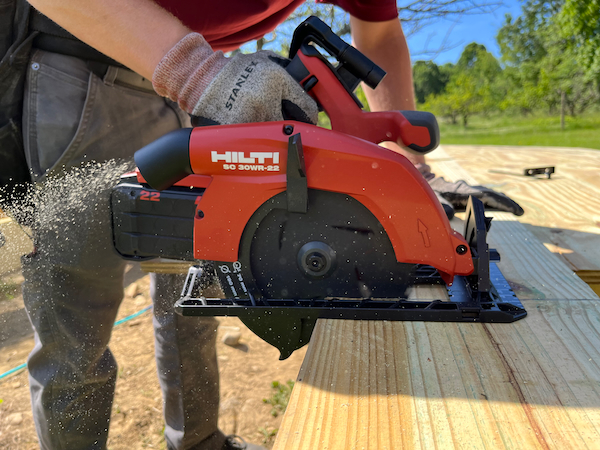 We took the HILTI 22V NURON Circular Saw SC model # 30WR-22 in the field for a few months to evaluate it. 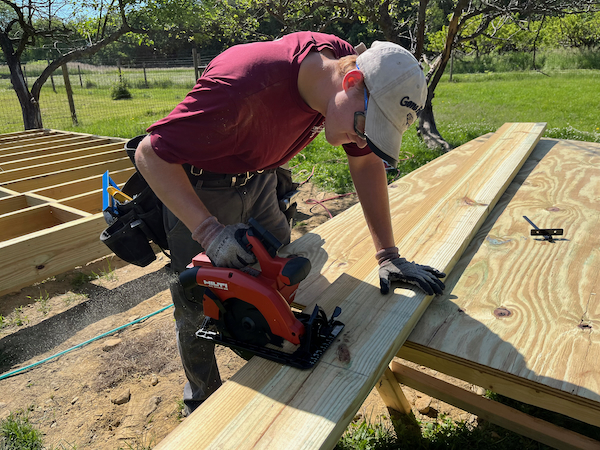 As a bare tool, we noticed that the Hilti 22V Nuron Circular Saw SC 30WR-22 is larger and mid-range in weight for its class. We also noticed that Hilti re-engineered the Nuron batteries to be more durable including a new, robust fiberglass-reinforced housing and external shock-absorbing bumpers. 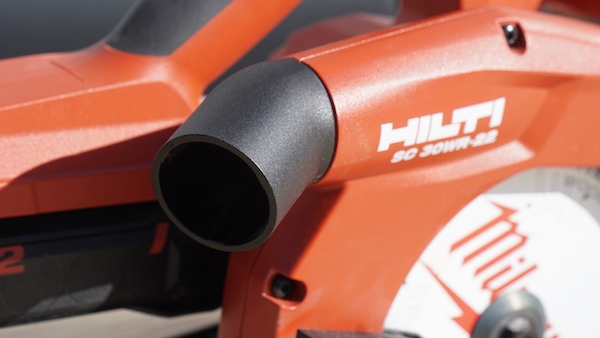 We also really liked the 360 rotating dust chute, with a large open tunnel at the top of the blade and while we did not connect this saw to a dust extractor we know that some of you do. 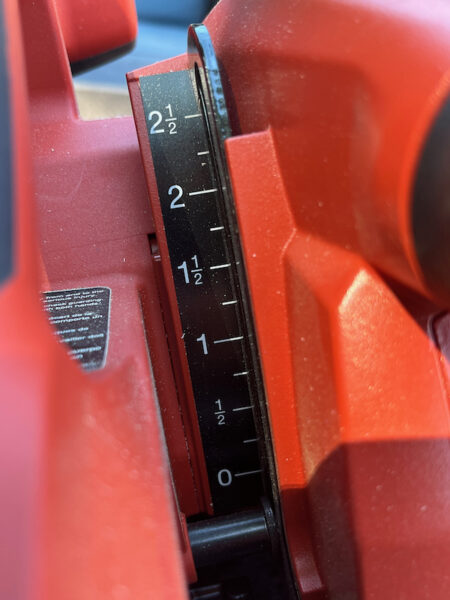 Another feature we noticed immediately was the depth of cut scale. It’s large and easy to read with white numbers on a black background, indicating 1/4 inch depths from zero to 2-5/8″.  Setting the blade depth is easy with a large lever, but the thing that impressed me the most was how smooth the action was. 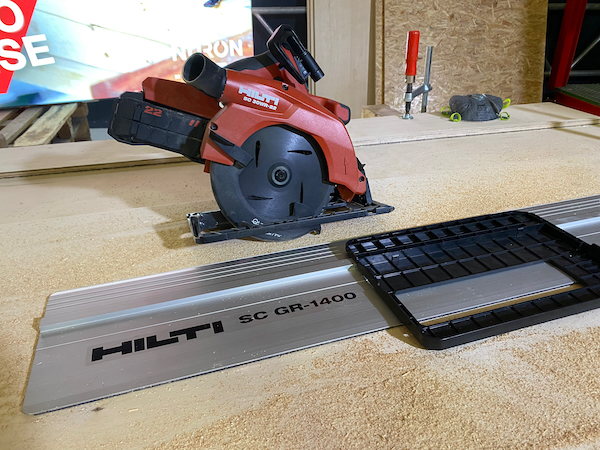 A feature that many will be glad to hear is that this saw is track compatible with the purchase of a saw base plate and track. We did not test this in the field but did get to use it at their saw unveiling in Switzerland earlier this year. While it is not a track saw this feature will allow you to use the circular saw to achieve super straight cuts.

Lastly, the Hilti 22V Nuron Circular Saw has a comfortable grip, a smooth rounded trigger with excellent action, and no pinch points. 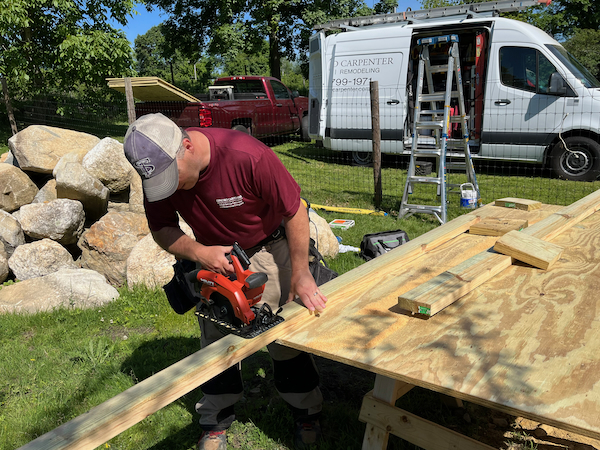 We used this saw to frame a small barn for a client and there were two things that impressed me in the first week, they were: 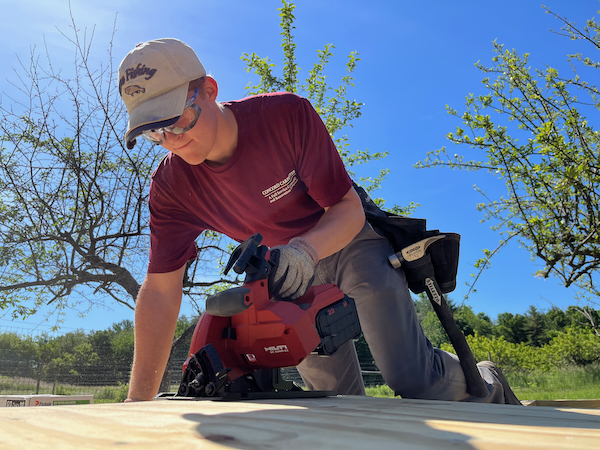 The Hilti 22V Nuron Circular Saws re-designed Nuron battery interface ensures higher performance by allowing a significantly higher power transfer, and it shows. Everyone on the barn build was impressed with the speed of cut and power of the saw. Comparing the older Hilti saw to this newer one, we’d estimate that it’s at least 3X faster, although we did not test for that.

If you’d like to see how this saw compared to other saws, in features, power, speed, price, and other categories, check out our recent  7-1/4″ Circular Saw Head to Head test.

We did not set out to determine run-time on the Nuron batteries but man was I wowed by how much work we got done with one battery. Using the larger battery, the HILTI 22V Nuron Circular Saw lasted a week of constant cutting. It cut all of the floor systems, walls, plywood, rafters, and roof sheathing on our 200 sq. ft. barn before the battery needed changing.

The Hilti positive stops were money, and the action on the bevel was smooth. It has a super solid build, with a stop knob on the bevel, and an easy-to-see bevel and scales. The positive stops at max bevel 45 and 22.5 degrees were easy to use, set, and understand. It also bevels to 50 degrees.

The HILTI 22V Nuron Circular Saw generates data which is then stored on the Nuron batteries and sent securely to the cloud during every charge without any operator interaction. The data collected includes information such as tool usage, tool utilization, charging location, and battery state of health. This information can then be used to alert individuals if action is needed immediately or can be accessed on-demand as required and is available on mobile and desktop via Hilti’s ON!Track software platform.

Together with services like Hilti Fleet Management tool data can be used to reduce downtime and optimize tool cribs to boost customer productivity. 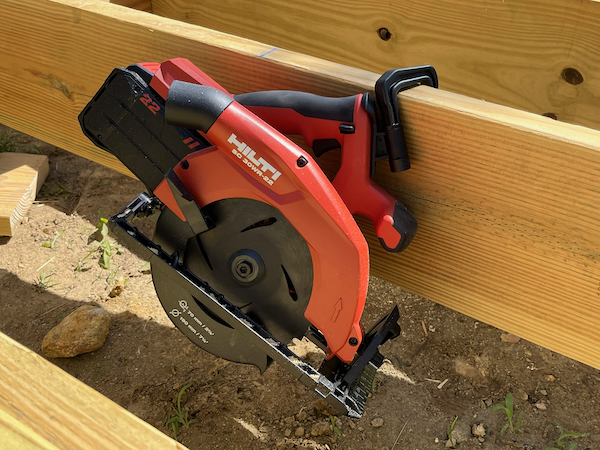 If there was one feature on this saw that we’d like to see improved, it’s the rafter hook. Currently, the plastic hook is mounted on the top of the handle and swivels 180 degrees left or right. 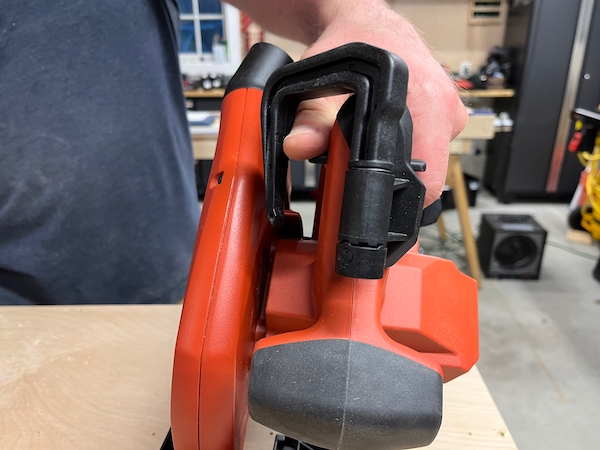 The hook will allow hooking one single member 2x material and we often found it in the way of actuating the safety button prior to turning the saw on. there is very little clearance to slip your thumb under the hook, especially for large-handed users. There were several times when the hook was stowed by one user and the next had to rotate it out of the way to use the saw. 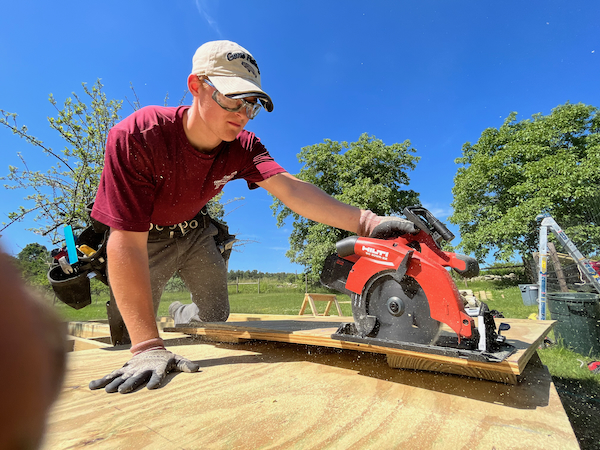 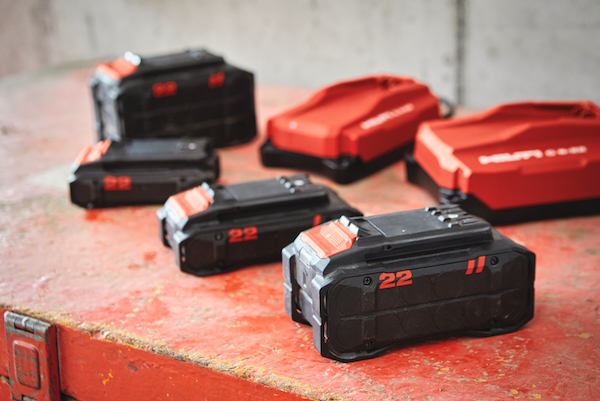 As a company, Hilti has been slow to update its tools as evidenced by some of our past Head-to-Head tests. This  Hilti saw really impressed our crew. It is well-balanced given its long length, has a super-solid build, was powerful and smooth cutting, and had really nice features and adjustments.