How would you like to charge your batteries 4X faster than you do now?

In years past batteries sat idle on chargers for a long time, that’s about the change with the Milwaukee M18 & M12 Super Charger. In my opinion the Super Charger is BIG story! 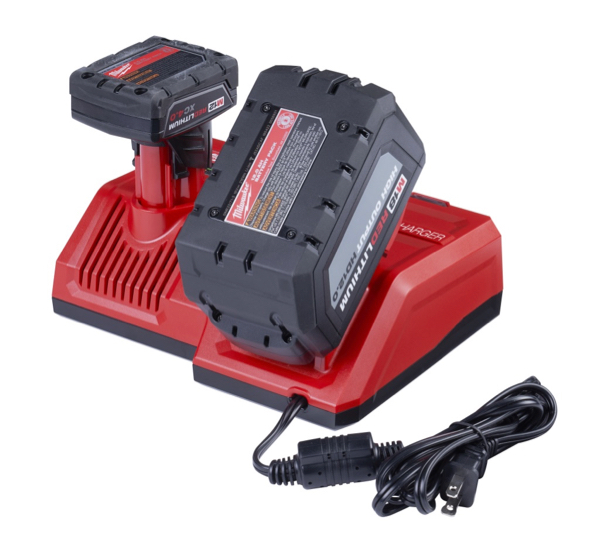 With the advancement of cordless tools and battery amperage, charging times have increased. For example, if we look at the HD12.0 ah battery it takes a whopping 241minutes to charge on a standard charger; 130 minutes in a Rapid Charger; and only 60 minutes in the Super charger.

When you stop and think of it – that’s 4X faster than the standard charger – which by the way, is Milwaukee’s MOST POPULAR charger on the jobsite.

Designed To Work FASTER with the HIGH OUTPUT Batteries

The Milwaukee M18 & M12 Super Charger is optimized to work FASTER with the HIGH OUTPUT batteries, although it will charge ANY M12 or M18 battery. Based off the battery’s pre-programmed charge profile, the Super Charger leverages what Milwaukee calls “REDLINK Intelligence” to communicate with each battery during and after the charge cycle.

Essentially, the Super Charger has the capacity to charge up to 13.5A, but intelligently can adjust that charge rate down, depending on the batteries inserted.

These newer M18 HIGH OUTPUT™ batteries are equipped with advanced charging capability, now realized with the new Super Charger. This allows users to now charge batteries 4X faster than they would with the standard charger.

All HIGH OUTPUT batteries charge in 1 hour or less.  This one-hour charge is particularly game-changing, by raising productivity to a whole new level. 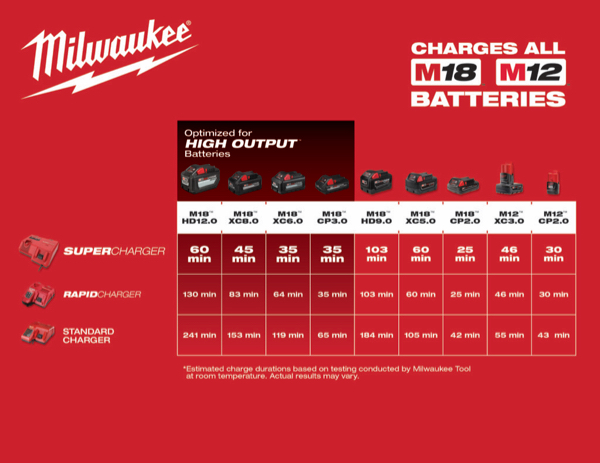 What About My Older M18 Batteries?

REDLITHIUM batteriesbut do not share the same charging potential as HIGH OUTPUT™ batteries.  To prioritize overall pack life, the Super Charger automatically defaults to a RAPID charge rate, still decreasing charge time by up to 40% vs. standard rate chargers.

Why the M12 Charging Port?

So you may be asking why there’s an M12™ charging port on this but no HIGH OUTPUT M12™ batteries…. Yet. Milwaukee added an M12 charging port to this charger because their research shows that 70% of the Milwaukee users are in both the M12 and M18 platform. 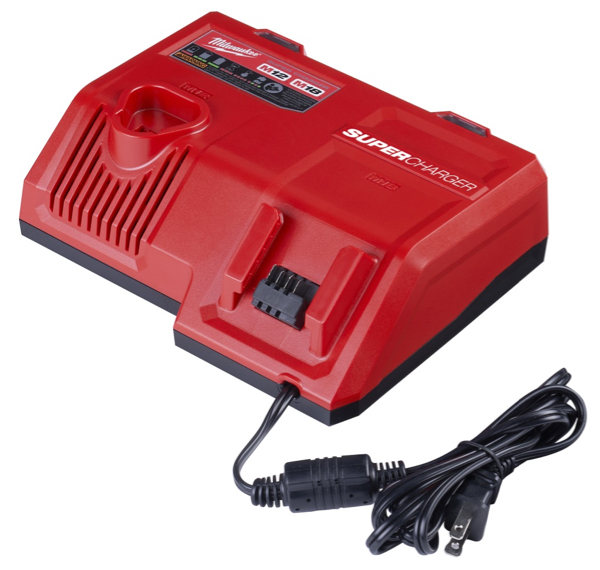 How Were Using Cordless On Site

Normally I show up to a jobsite with several freshly charged batteries and toss a few in a charger while setting up in the morning. It takes until mid-morning to get these batteries charged. If you were to replace your batteries with the HIGH OUTPUT batteries, and a super charger, in theory, you would need to own and carry less batteries.

Your batteries would be 100% charged, anytime between 35 and 60 minutes, depending on the battery amperage.

But even if you don’t replace all your batteries with HIGH OUTPUT™, you’re still going to benefit from the technology Milwaukee put into this charger. As I mentioned earlier, the Super Charger gives standard M18 batteries a decreased charge time up to 40% of the standard rate chargers. 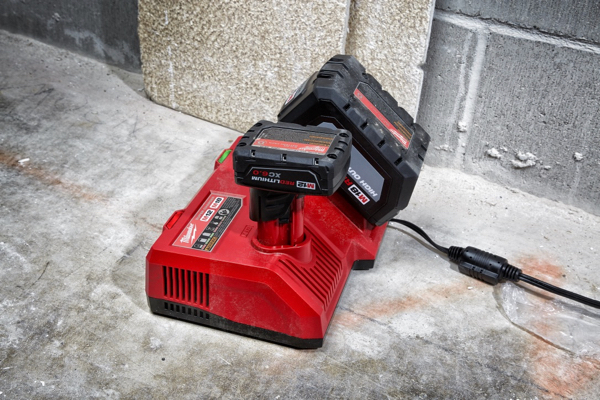 Cordless technology has advanced far more than I ever imagined. I’m still amazed at the amount of work that can achieved with cordless tools. Yet – lots of Pros are still skeptical about cordless. While I’m sure some are just “Old-School,” I’m guessing some are worried they’ll be a slave to the charger, waiting for batteries to charge.

With the new technology manufacturers are putting into batteries and chargers, like the Super Charger, that worry is less and less of a concern. With two batteries, pros can get through the majority of their day just by rotating each pack on the charger.

Just think – you could have FULLY charged a 2.0Ah battery in the time I’ve been talking to you!