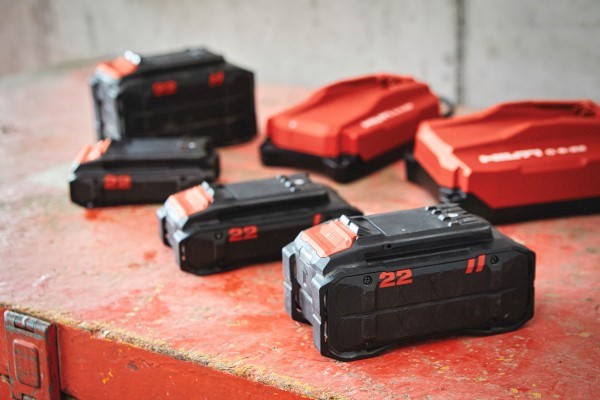 The new NURON batteries have a few key features that are completely new concepts for Hilti. They include a re-engineered battery/tool interface and electronics design as well as a completely redesigned housing.  These combine to offer a tougher battery better able to withstand daily weather and job site rigors. Along with the battery upgrade, Hilti has updated over 70 power tools to take advantage of the larger capacity packs including the use of brushless motors, which is long overdue! Hilti promises that these batteries will:

“enable a step-change in 22-volt cordless performance and power tool classes previously only possible on higher-voltage platforms, gas or electric powered while… Delivering more than double the power of their current 22V tools.” 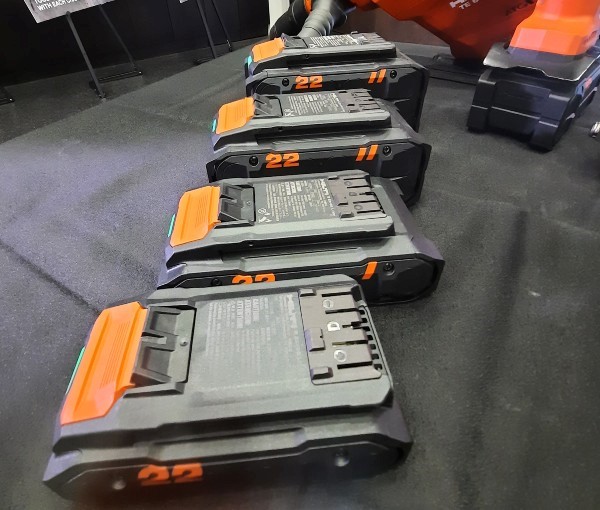 How do the batteries deliver more power? Well its really just some simple math. Using a basic water pipe analogy to help visualize it, you can either increase the size of the pipe (Current/Amps) or the water pressure (Voltage) to increase the overall water power.

As we’ve shown on other Brands and in our Head-t0-Head testing every battery pack has a certain total amount of energy (potential power) to do work. With tools that use a single voltage like NURON, it’s a very simple equation. Below is one example of one pack size.

This is definitely an exciting design enhancement as we’ve seen failures of these connection points on other Brands especially in large capacity tools with a lot of vibration and impact loading. 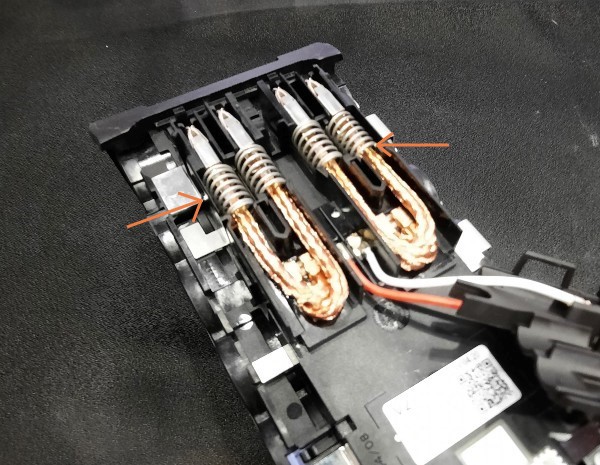 The main improvement to the electronics is a “potted” vs. lacquered protective (vs some competitors; all current Hilti batteries are also potted) covering on the internal circuit boards and integrated chips. What does this mean? That the electronics components are set in an epoxy style resin based for improved dust, moisture, and corrosion resistance. It also further protects vibration-based damage to internal electronic components by transferring unintended vibrations to the battery housing instead of to the smaller (and more fragile) electronic components.  This is a long overdue upgrade that many other Brands have also incorporating that drastically improves the durability of the packs. 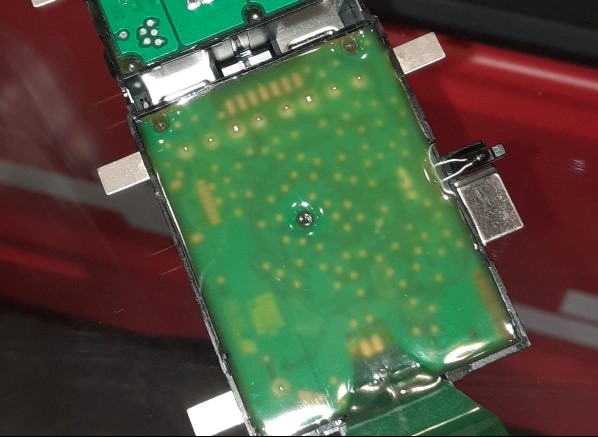 The battery housing includes integrated bumpers in the all-glass-fiber housing and a cell holder that completely surrounds the batteries. This offers great fall and impact protection to the Lithium-Ion battery cells. The battery housing was also redesigned to include less open space between the cells. At first this seemed counterintuitive for cooling purposes. But, Hilti engineers explained that the cell holder material in contact with the cells helps better control and slow down heat build-up during an application. 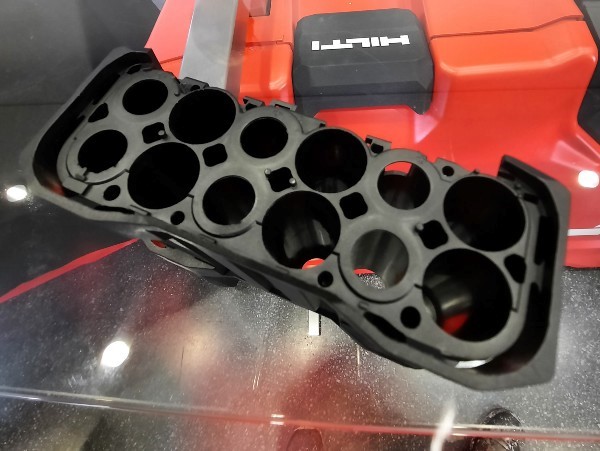 With a wide range of battery pack sizes (Amp-Hours) users can select packs that offer sufficient available energy (think of a gas tank size) for the task. As we showed above, higher voltage isn’t the only way to get more work done, Hilti is making larger packs that allow much higher amp draws for high demand applications.

With Hilti’s B22-255 (12Ah) double loaded (some new tools will use 2 battery packs), you get to a class of power output, especially when optimized in a higher-output timeline, that actually can be equated to corded power (110V, 15A). And can absolutely compete with 36V, 48V and 60V battery platforms.

And to make it easy, Hilti is releasing their new NURON batteries in 4 different sizes: 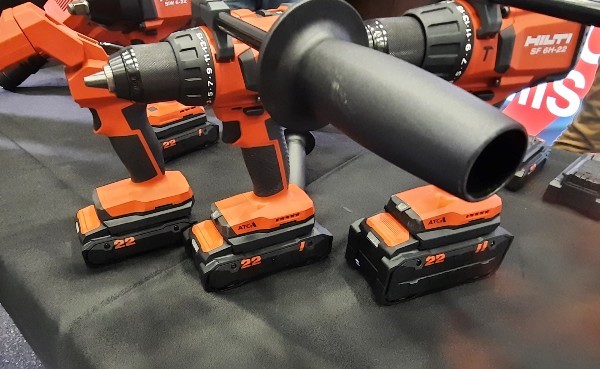 One of our first questions was – ‘does a NURON battery work on an older Hilti tool?’ the answer is yes, maybe. It works if you have the battery pack adapter. Hilti did this to try and find a middle ground. They said they didn’t want to limit a new design to fit an old one but recognized that users already invested in Hilti tools wouldn’t need or want to upgrade all their tools at once. That’s bad business and we agreed. Most non-industrial based users can’t afford to do that! So the 22V NURON adapter does that. But it will add 3-4 inches of extra bulk to adapted tools.

It will be interesting to see how this pans out. Considering this is still a 22V pack the reasoning must be the electronics, but for some users this may be a roadblock. Clearly other manufacturers like Makita and Milwaukee have avoided this likely at great cost but certainly to benefit the users. 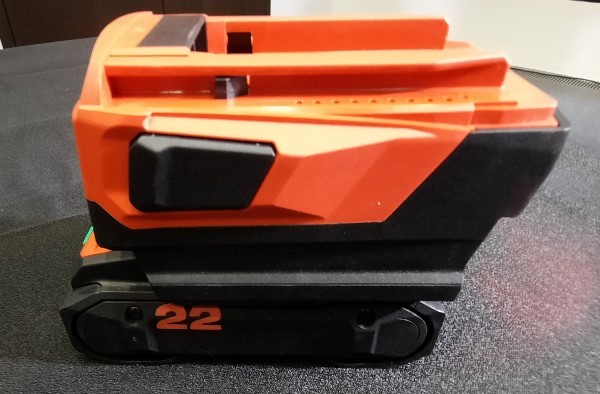 Hilti also made some savvy feature upgrades with the battery status indicator while retaining one of our favorites. The battery status indicator light now stays on throughout operations, in addition to still turning on after being connected to or removed from the tool. So whenever you pull the trigger, the battery status of the loaded battery shines bright green. This makes it super easy to maintain awareness on your current battery power without having to stop working. And if you want to know the “state of health” of the battery cells, all you have to do is hold the indicator button for 3 seconds and it will show green or yellow to show you its current cell health.  It’s a thoughtful, forward thinking feature we love.

But Hilti didn’t stop there with adding in new features. Hilti also created what they call “data driven services” to use data from the tools, batteries and chargers to provide better services. NURON batteries have an internal memory card that can store information from up to 12 tools at a time. When the batteries are plugged into the charger, the data is automatically uploaded to the cloud via cellular networks without any setup required. This allows users to make data driven decisions based on site-specific tool usage patterns. Using Hilt’s ON!Track software on app and web customers can track this information by user or jobsite or just leave it at a tool-level, whichever they prefer.

The new Hilti NURON platform and associated power tools is a welcome update. In our regular series of Head-t0-Head testing Hilti has certainly been behind their competitors in large part due to the slow incorporation of brushless motors. With a huge upgrade to their battery packs and electronics combined with the brushless motors users will see a drastic improvement in performance. Hilti also smartly incorporated IoT technology into the charging base to aide with data analytics in tool usage to help project managers and business owners alike make smart decisions on the right tools for the jobsite.

The bottom line is Hilti users will see some great improvements in performance and durability. We’re excited to get our hands on these new tools and test them on the job!